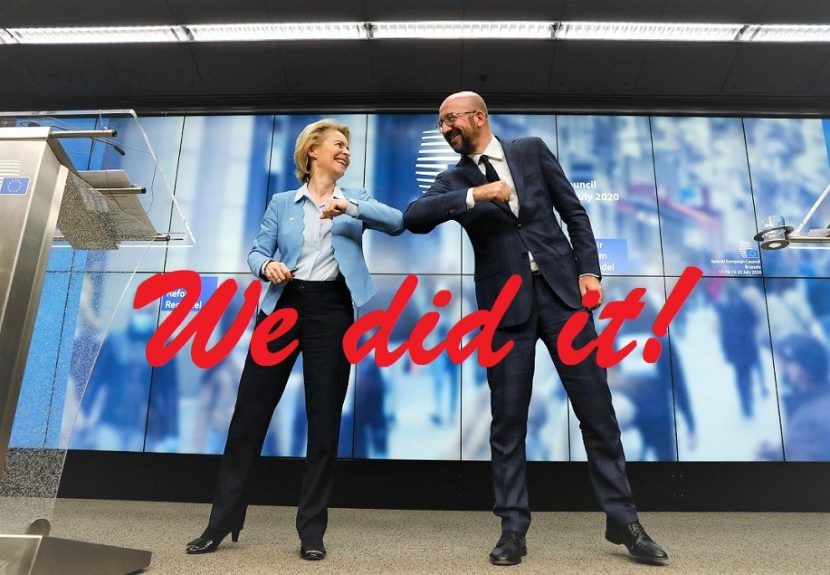 We have demonstrated that the magic of the European project works because, whenever we think something is impossible, there is this resilience, by dint of respect, cooperation,
the willingness to work together, to overcome the difficulties  together,
by dint of mutual respect, there is this ability to cope  by
uniting, by coming together.  That is the magic
of the European project.

We have reached a deal on the recovery package and the European budget. These were, of course, difficult negotiations in very difficult times for all Europeans. A marathon which ended in success for all 27 member states, but especially for the people. This is a good deal. This is a strong deal. And most importantly, this is the right deal for Europe, right now.

I would like to thank all the leaders and the President of the Commission and their teams for their hard work. We showed collective responsibility and solidarity and we also showed our belief in our common future. And this agreement sends a concrete signal that Europe is a force for action.

We have adopted guidelines on own resources, which represent a boost for the future of the European project by identifying the issues that we will address, together with specific timetables.

We have taken the view that the rule of law, governance, and our common values must be at the heart of what we do, and they are also at the heart of the decisions we are taking today.

As you can see, we have demonstrated that the magic of the European project works because, whenever we think something is impossible, there is this resilience, by dint of respect, cooperation, the willingness to work together, to overcome the difficulties together, by dint of mutual respect, there is this ability to cope by uniting, by coming together. 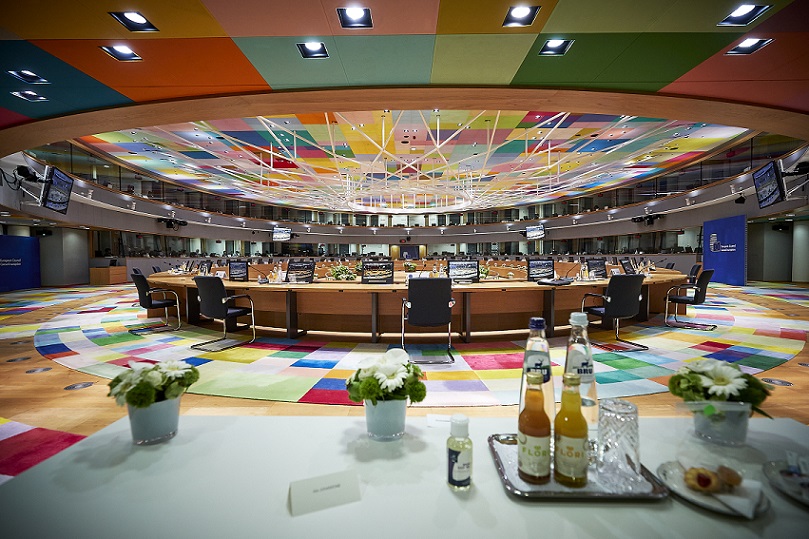 Conclusion Round Table of the Special European Council for the European Recovery Plan, 21 July 2020: “That is the magic of Europe.”

That is the magic of the European project. We have demonstrated it over and above our differences, our sensitivities, and our opinions. Europe has sent a signal to Europeans and to the rest of the world that this European Union is a Union of values; this Union, which brings together 450 million citizens, has the ability, when necessary, to respond with strength and robustness.

The signal we have sent is a signal of confidence and I believe it is an essential signal at a time when the world and Europe have been hit by an unprecedented crisis. A few hours ago, more than 600 000 deaths were attributed to COVID-19.

We know that this crisis affects and will affect families, women and men. We know that it is the responsibility of political leaders in our shared democracy to be able to demonstrate our ability to deliver pragmatic and real solutions.

The decision that we have taken is not a virtual decision. It is a real decision that will have and must have a positive impact in order to ensure that we can look to the future with the determination to live up to this challenge.

On June 5, 1947, Secretary of State George C. Marshall, a retired soldier, outlined one of the most important policies in U.S. and European history – the European Recovery Program, which quickly became known as the Marshall Plan.

The United States offered billions of dollars to rebuild war-devastated Europe, but only if European nations would cooperate to share the aid money for the benefit of the entire region. The United States demanded that each nation receiving Marshall Plan funds also invest an identical amount of its own money in reconstruction projects. Marshall offered aid to the Soviet Union and its allies, but Joseph Stalin refused the offer. By the time the Marshall Plan ended in 1952, the United States had invested $13 billion, and nations receiving the funds experienced the most rapid growth in European history.

Marshall’s requirement for economic cooperation set in motion a trend toward European integration that included the Schuman Plan, the Coal and Iron Community, the Common Market and, eventually, the European Union (EU). On the 60th anniversary of Marshall’s speech, the EU encompassed 27 nations and 500 million people with a combined gross domestic product (GDP) of $14 trillion, exceeding the GDP of the United States. More. 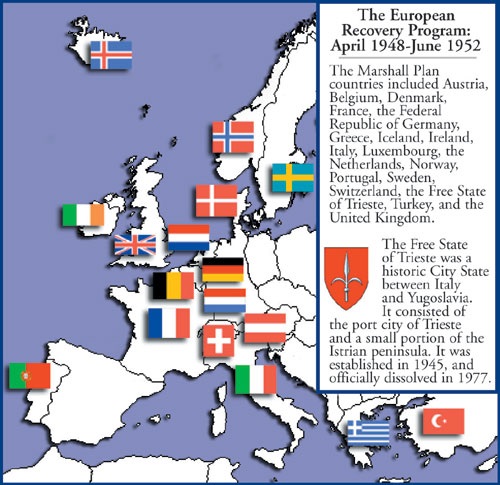 The map shows countries that received assistance under the Marshall Plan. From April 1948 to June 1952, the Marshall Plan invested more than $13 billion into reconstruction projects in 18 countries. Marshall Plan projects were proposed and coordinated by a committee of recipient nations, ensuring regional cooperation. For every U.S. dollar invested, member nations had to invest an equivalent amount in their own currency in reconstruction projects. European leaders seized on the plan to help them achieve long-sought goals of closer economic and political cooperation. (ShareAmerica.gov) 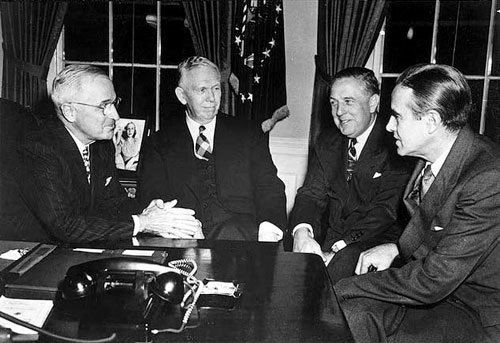 Architects of the Marshall Plan meet at the White House in November 1948. From left: President Harry Truman; Secretary of State George Marshall; Paul G. Hoffman, head of the Economic Cooperation Administration, which was the Marshall Plan’s headquarters in Washington; and Ambassador W. Averell Harriman, the Marshall Plan’s coordinator for Europe, based in Paris. (Library of Congress) 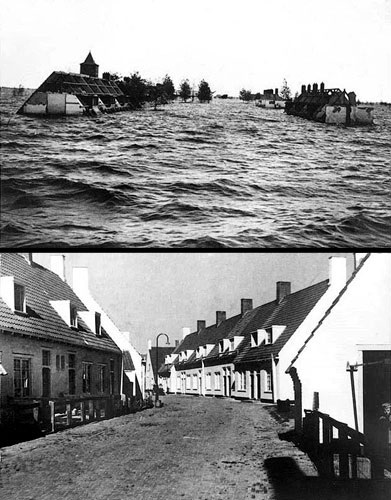 (Top) Homes on Walcheren Island, Netherlands, were flooded by wartime bombing of Dutch dikes. (Bottom) By 1950, Marshall Plan funds had repaired the dikes, reclaimed the land and rebuilt the homes. (Library of Congress) 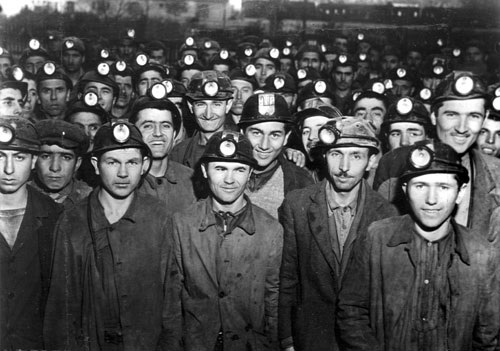 Coal miners in Zonguldak, Turkey, circa 1950, where Marshall Plan programs helped modernize equipment to turn the mines into a reliable energy source for Europe.
As a neutral nation in World War II, Turkey did not suffer war damage. However, because of its growing ties with Western Europe, Turkey received $225 million in Marshall Plan funds to modernize its infrastructure as part of project linking it more closely with the European economy. (U.S. National Archives) 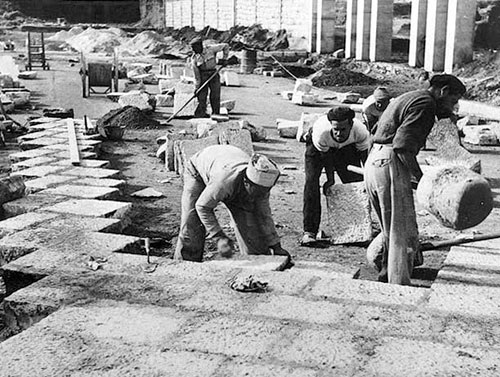 Workers rebuild a road in Palermo, Sicily, circa 1949.
Much of postwar Europe was rebuilt by hand, using age-old techniques. An aspect of the Marshall Plan was to import bulldozers, trucks and other equipment to help clear and repair war-damaged areas.
In a larger sense, the Marshall Plan was aimed to reconnect broken trade patterns throughout Europe. But significantly, the Marshall Plan was not a development project aimed to create new industries and new trade. Instead, it focused intently on rebuilding a destroyed continent that, before the destruction of two world wars, had been one of the world’s great economic and cultural hubs. (Library of Congress) 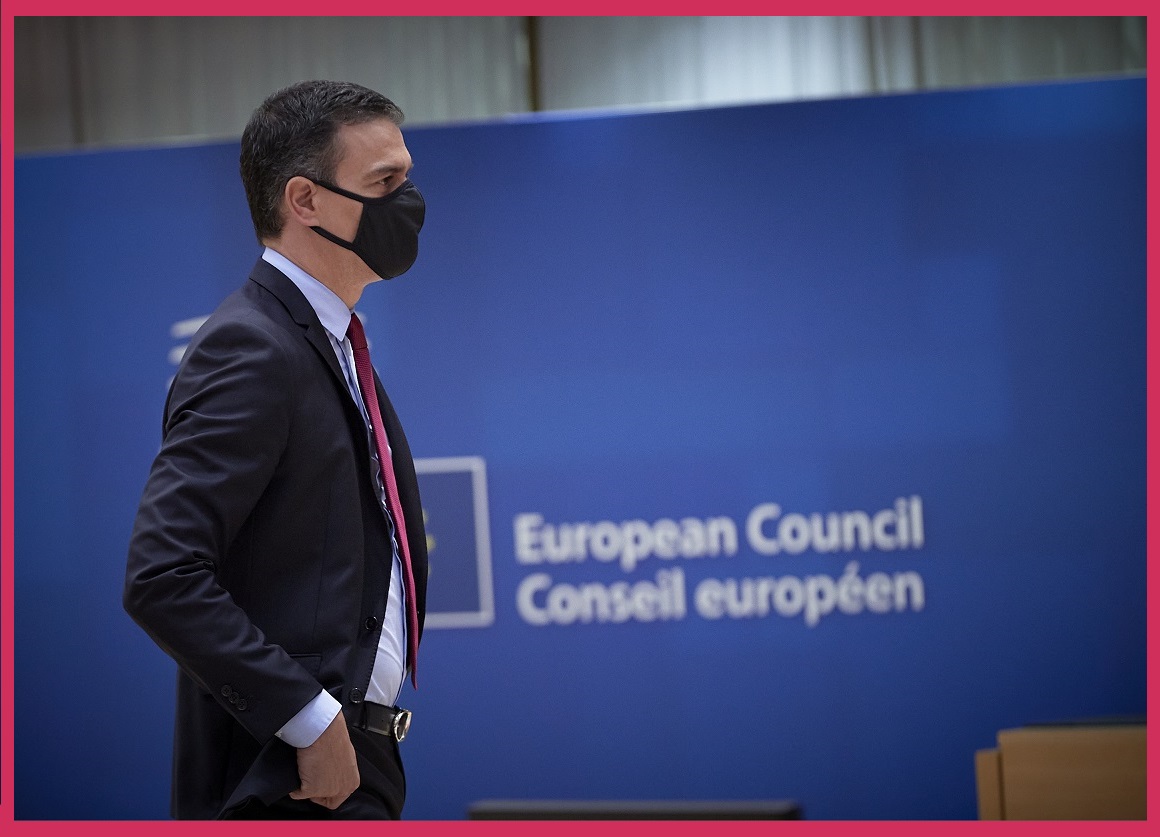 Previous article « SPAIN TAKES A CLOSE LOOK AT THE EU’s “MARSHALL PLAN” AND FINDS IT BRILLIANT!