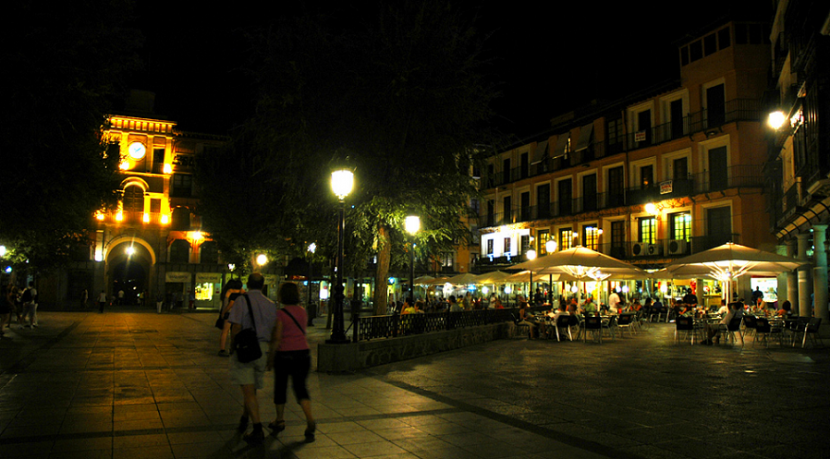 Nightlife in Toledo, the Plaza de Zocodover:  “That it is perfectly normal for the party to be in full swing at
5:30 am was a truly enjoyable experience which allowed me a glimpse into the culture I wanted to
be a part of, but also reminded me early on that I was very much an extranjero”
(Photo: G Da, CC BY-SA3.0)

Thoughts on a Year Living and Studying in Toledo, Spain

After settling in to my new home, I was to have my first authentic Spanish night out. Although I had been told that the Spanish go out later than we are used to in England, by 11:00 pm I began to get worried they had forgotten me when I received a message saying we would meet at Midnight in a bar close by.

Having arrived in the picturesque former Spanish capital Toledo ready for my ERASMUS year, after a good night’s sleep I set about the task that had been bothering me most in the build up to departure, finding a place to live. On a blisteringly hot September morning, unusual for that time of year I was told, I set out into the winding city streets to find the ORI, Office of International Relations, where I had been told they would help me to find accommodation. On arriving at the University I was greeted by a confused looking group of students tentatively testing their broken Spanish in search of a new home, and I quickly managed to attach myself to a small group who were off on a number of visits to local flats armed with a list of addresses provided by the ORI.

Despite our best efforts to communicate in Spanish, as is often the case within the ERASMUS community particularly in the first few months, English became the language of choice for explaining or discussing things more complicated than basic courtesies, handing me a natural advantage as a native. As we made our way out on to the balcony of the first of 4 flats we had arranged to view I remember how excited I felt yet again that I would be able to spend the entire year in this beautiful city, experiencing a country and culture so different from my own. It looked as if the view of the cobbled streets below filled with the kind of friendly buzz I had associated with the Continent before my arrival was about to become my reality, and I couldn’t wait to move in and get involved. Despite looking around a further 3 apartments during a tiring first day, along with a group I had met only that morning, I returned to confirm interest in the first flat, and we moved in the following day.

After settling in to my new home, the following weekend I was to have what I consider to be my first authentic Spanish night out, when I was invited de cañas, to have a drink, with someone who the Uni had put me in contact with to help me settle in. Although I had been told that the Spanish go out later than we are used to in England, by 11.00 pm I began to get worried he had forgotten me when I received a message saying they would meet at Midnight in a bar close by. I arrived at a bar with a sign outside advertising buckets of 5 beers for only 3 Euros, thinking that this kind of offer in England could only end in disaster. What I found however was the warm atmosphere I had been hoping for, and a distinct lack of stumbling vomiting zombies which often accompany this kind of prices on a night out in the U.K. I immediately felt included in the group of Spaniards who I had known for only a matter of minutes, but there was certainly a rude awakening on the language front. Having spent the past week with ERASMUS students I had become naively confident in my abilities, but in a raucous bar full of natives I learnt quickly to develop an expression (of which I’m sure anyone who has learnt a foreign language will have their own version) which neither agrees nor disagrees with any statement uttered which has not been entirely understood. 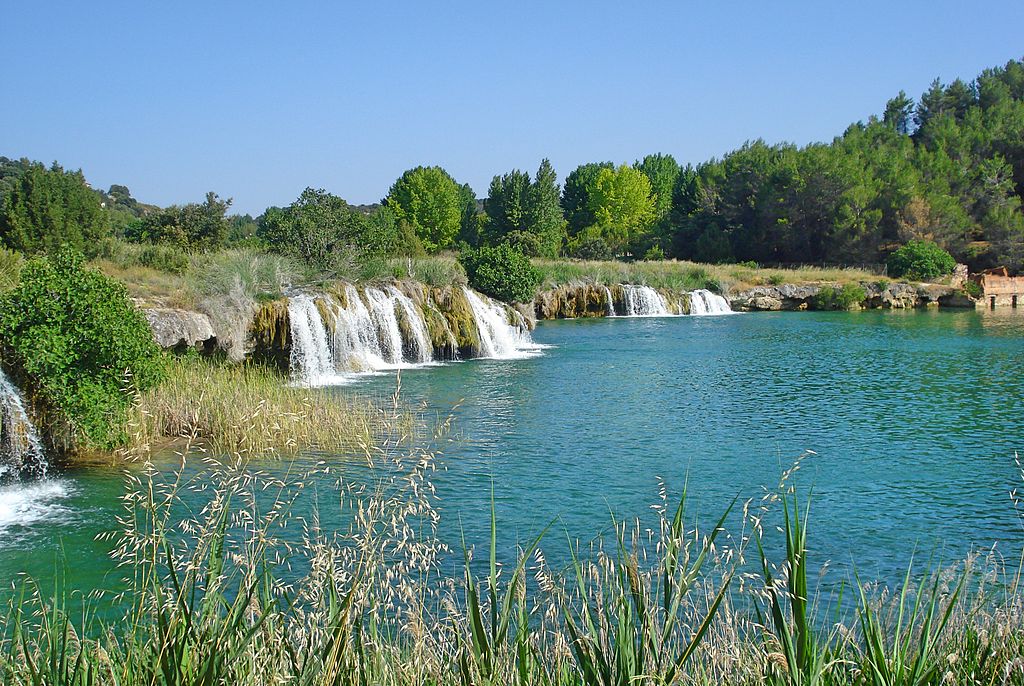 In keeping with the stereotype of fantastic Spanish hospitality, this night out was followed by a subsequent visit to the home town of my new friend just a week later. We were lucky enough to be able to spend the weekend in what remains to be one of the most beautiful places I have been in the country, Las Lagunas de Ruidera. This is a national park in the centre of Castilla La Mancha, which despite being surrounded by thousands of kilometres of what is essentially desert, is home to fifteen beautiful lakes bordered by luscious terrain and connected by a series of channels which run between the rocks. It really is a breathtaking location, so full of life in the face of the barren hostility which characterizes the landscape in that part of the country.

It was here during this weekend that I would discover for the first time that though I may well fall in love with Spain, and I was doing so fairly quickly, that no matter how much I tried to blend in, I would forever be English, and carry with me certain traits which go along with being the awkward anglosajón character which the Spaniards perceive. Being surrounded by the comparatively uninhibited Spaniards who found it perfectly normal for the party to be in full swing at 5:30 am was a truly enjoyable experience which allowed me a glimpse into the culture I wanted to be a part of, but also reminded me early on in the year that I was very much an extranjero, a foreigner. With this in mind, as the first semester of University began, I found myself recycling a phrase which became very popular within the foreign student population: “Sorry I’m ERASUMS!!” more often than I would have liked as I struggled to get to grips with studying in a foreign language. 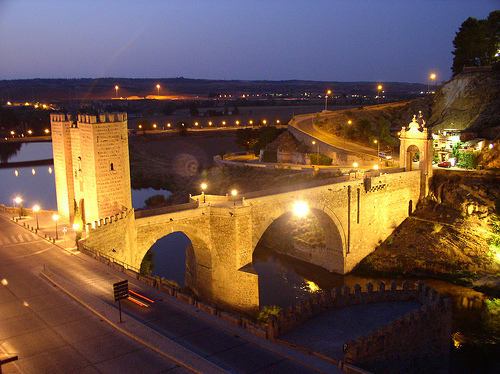 At night on the Alcantara Bridge that leads into Toledo (Photo: tomo from Warsaw, CC BY2.0)

By the end of my first month in Toledo, classes aside, I was beginning to feel settled and as if I was slowly becoming more accustomed to the Spanish way of life I wanted to experience. As things which were at first new, interesting and exciting became more routine it appeared that my time living in Spain was finally beginning.

Celebrating its 25th anniversary in 2012, ERASMUS is the most successful student exchange programme in the world. Each year, more than 230 000 students study abroad thanks to the Erasmus programme. It also offers the opportunity for student placements in enterprises, university staff teaching and training, and it funds co-operation projects between higher education institutions across Europe.

A European success story
Erasmus became part of the EU’s Lifelong Learning Programme in 2007, covering new areas such as student placements in enterprises (transferred from the Leonardo da Vinci Programme), university staff training and teaching for business staff.
Erasmus is the perfect example of a European success story: close to 3 million students have participated since it started in 1987, as well as over 300 000 higher education teachers and other staff since 1997 (this type of exchange was also expanded further in 2007). The annual budget is in excess of 450 million euro; more than 4 000 higher education institutions in 33 countries participate, and more are willing to join. 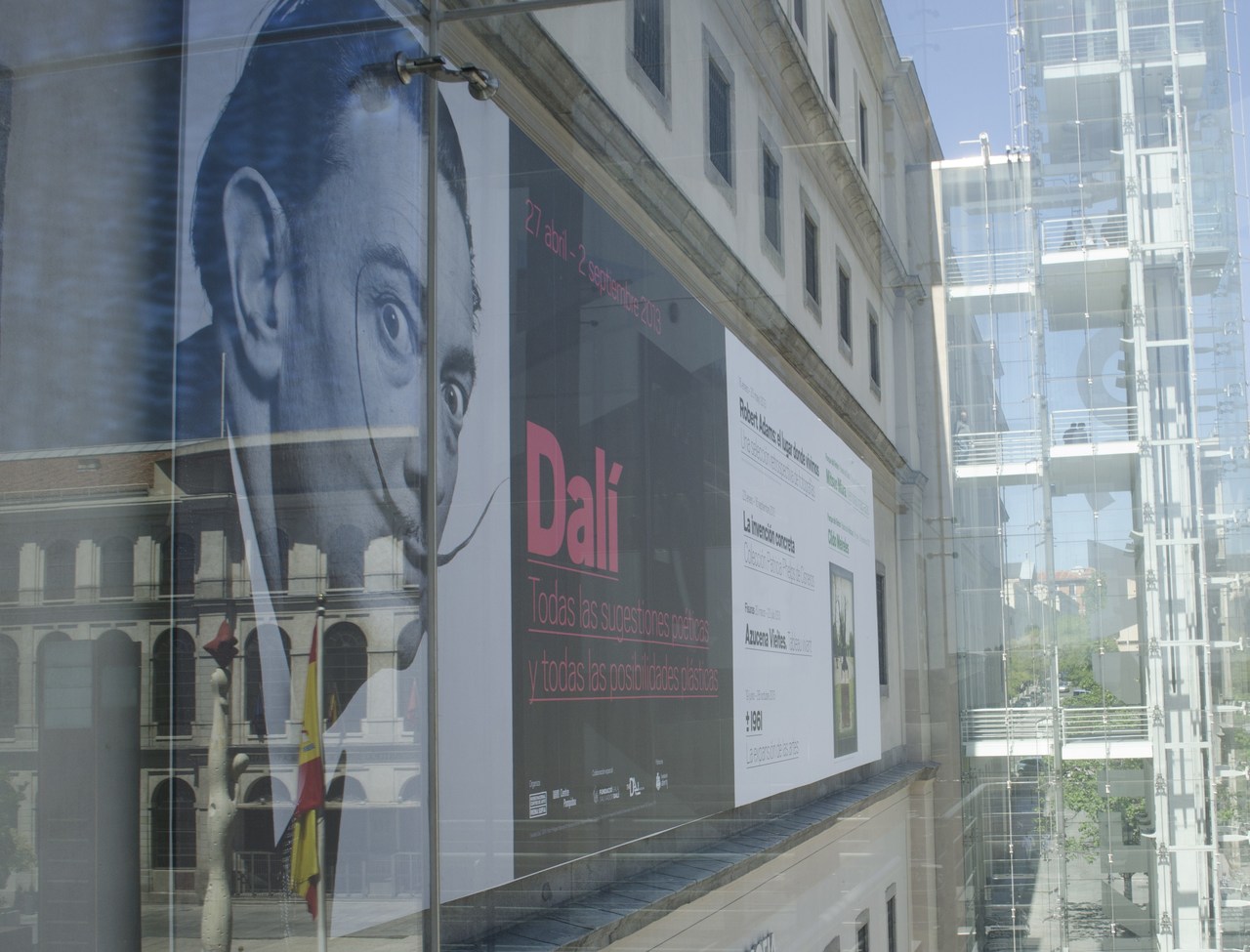 Next article DALÍ, TO SEE OR NOT TO SEE »