EDITOR’S BLOG: Tio Pepe is Back! 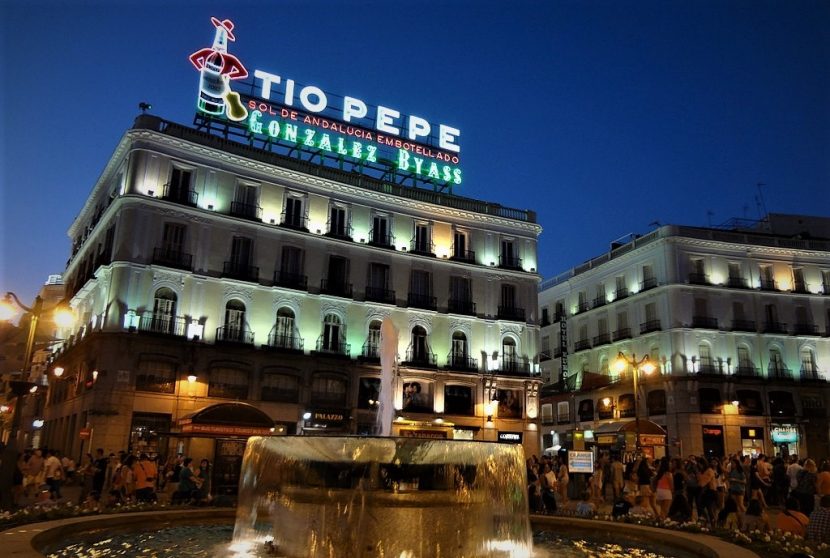 There’s an incredible myriad of things going on in Madrid’s Puerta del Sol in just one day it can fill up an entire magazine without dipping into its reserves. Which is quite a blessing for us folks who must forever be on the lookout for news to tell our readers.

It’s doubly lucky that Puerta del Sol is only a 10-minute brisk walk from the Guidepost office.

Well, this evening (8 May), after our usual tapas, we went and checked Puerta del Sol out. The plaza was filled to the rafters, so to speak. But then we would have been alarmed if it wasn’t.

In front of the magnificent bronze statue of Charles III, the beloved king who the Madrileños have long claimed to be their own mayor, there was this outsized button on a stubby pole and barricaded to keep the excited crowd from toppling it.

We were sure it was put there to symbolize something in some kind of ceremony but we didn’t know what exactly that was. Then what do you know! From inside the eighteenth century Real Casa de Correos, seat of the government of the autonomous region of Madrid, svelte señoritas filed out, lovely in their eye-catching red torero jackets and Cordoba hats.

Wait a minute, don’t they resemble the attire Tio Pepe has been wearing all these years? Why, it was the Chicas TP!

They posed inside the enclosure and it was like something had pushed the button; the old Tio Pepe neon billboard lit up. Tio Pepe is officially re-installed in Puerta del Sol after three long years of absence.

For eight decades the billboard portraying Tio Pepe, the sherry that “bottles the sun of Andalusia,” dominated the plaza – not a great span of time in a city that dates back many centuries. But by some inexplicable quirk, the Madrileños took to it and treated it like it’s always been part of their history. (The billboard has long transcended its commercial use.) So much so that in 2009 the City Hall declared it a “patrimonio histórico (historic heritage)” of the Madrid folks and escaped getting axed by then-mayor Alberto Ruiz Gallardon who declared that neon signs were “light-polluting”.

Three years ago, however, Tio Pepe was taken down from its perch on the roof of the old Hotel Paris for cleaning and facelift. All the while the Madrileños (including Guidepost which is nothing if not a native by birth!) fretted about the cherished neon sign ending up in a garbage dump.

So tonight, the sight of Tio Pepe all lit up in his Andalusian garbo brought a lump to many throats at the plaza. A lump of joy.

President of the Comunidad de Madrid Ignacio Gonzalez and Mayor Ana Botella, like the crowd outside, await in the Real Casa de Correos the lighting of Tio Pepe.

Tio Pepe has left Hotel Paris on number 1 Puerta del Sol which is being converted into Apple’s flagship store. He has moved to number 11, eyeball to eyeball with the clock atop the Real Casa (a.k.a Casa del Reloj or the Clock House). When that iconic clock rings in the New Year as is the tradition, Tio Pepe will be right in front to wish the expectant crowd gathered below a New Year full of the sun from Andalusia.