Madrileños, and Spaniards in general, took the Fiesta Nacional as an opportunity to
not only show their support for the police corps but also to declare
their stand on the Catalonian crisis, shouting phrases such
as “No os engañan, Cataluña es España”

There is no denying that, of late, tensions (as well as temperatures) have been running high in Spain.

The crisis of Catalonia’s secessionism ironically comes at this very moment when Spaniards traditionally celebrate their pride and unity in their country, the Doce de Octubre (12th of October), better known as Día de la Hispanidad, Spain’s Hispanic Heritage Day. 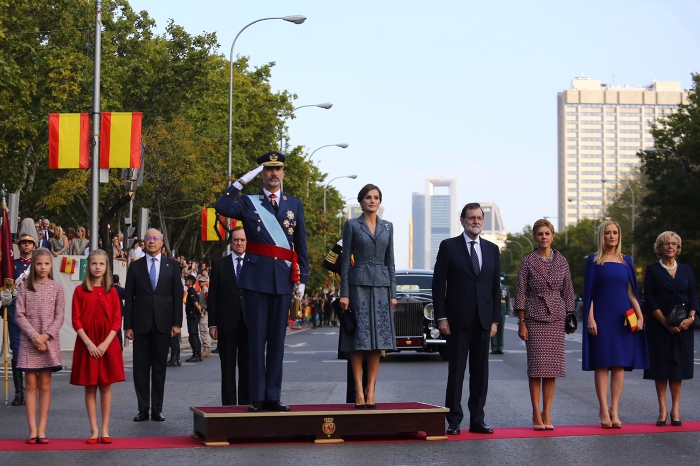 This Fiesta Nacional commemorates the arrival of Christopher Columbus in the Americas. The Italian explorer-navigator on the payroll of the Catholic Monarchs of Spain set sail from the port of Palos de la Frontera in the southwestern Spanish province of Huelva on August 3, 1492 and landed on the island of San Salvador in what is now the Bahamas on October 12, 1492.

With businesses closed throughout Spain, the national holiday was celebrated to the hilt, most specially  in the nation’s capital. The high point of the celebrations  in Madrid was the military parade which stretched from Plaza de Lima to Plaza de Colon whose Garden of Discovery is dominated by a gigantic monument to the Discovery of the Americas.

Four thousand soldiers of the Spanish Armed Forces marched in the street parade while overhead, in the so called air parade, 78 Air Force planes flew in breathtaking aerobatic formations to the delight of everyone present.

The motto in this year’s Fiesta Nacional was “Orgullosos de ser españoles (Proud to be Spaniards).”

The flag raising ceremony at Plaza Colon, presided by King Felipe VI, took on a special meaning in view of the Catalan crisis.

There was something undeniably different about the Madrid celebrations, apart of course from the unseasonably high temperatures. To begin with, the crowd was the biggest in years. Thousands gathered in a sea of yellow and red, the national colors, to proclaim their love for Spain. Flags were waved and songs were sung as children, the elderly, and everyone in between thronged the parade route beaming with pride in their country. 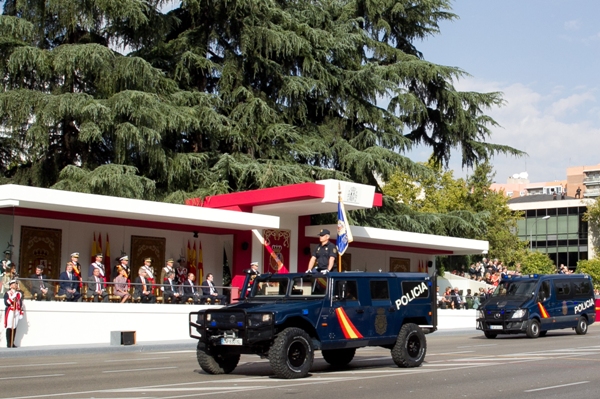 The participation of the National Police in the parade lent another special note; it was the first time in nearly 30 years. As they and the Guardia Civil (military police) passed, the people erupted into such a prolonged and resounding applause you would have thought they were cheering the King! 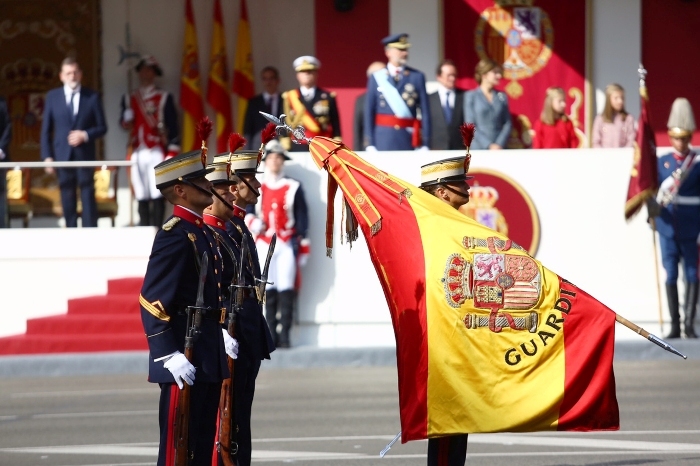 This special show of support, admiration and gratitude is the result of their policing job in Cataluña during and immediately after the illegal Catalonian referendum last October 1 when their cars were vandalized and hundreds of them had to be transferred from their hotels in Cataluña to hotels across the border to Aragon because of harassment by the pro-independence Catalans.

However, the Ministry of Defense insists that the participation of the National Police in the parade had nothing to do with the clashes in Catalonia.

Be that as it may, Madrileños, and Spaniards in general, took the Fiesta Nacional as an opportunity to not only show their support for the security forces but also to declare their stand on the Catalonian crisis, shouting phrases such as “No os engañan, Cataluña es España (Don’t kid yourselves. Catalonia is Spain).”

On the whole, it was relatively quiet over in Cataluña, what with the outcome of the Catalans’ fight for independence falling short of their expectations. Still, they are not laying down their arms; the fight goes on. Some Catalonian towns refused to observe the Dia de la Hispanidad, keeping their offices open in defiance of the official holiday. 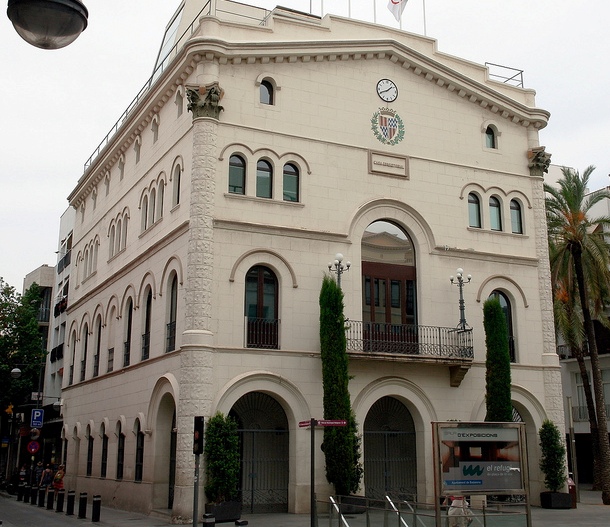 Ajuntament de Badalona: The councilors came to their offices on Dia de la Hispanidad though the defiance was incomplete as they did not exactly work but showed visitors how they went about their work/Almusaiti/CC BY-SA2.0, via Flickr, cropped

But none of these is comparable to a most shocking accident resulting in the tragic death of Capt. Borja Aybar whose Eurofighter plane crashed as he approached his home base, the Los Llanos Air Base, in the city of Albacete after his aerobatic performance in Madrid. Spain was stunned. Aybar, 34, was an experienced pilot, with over 1,189 hours of flying time. 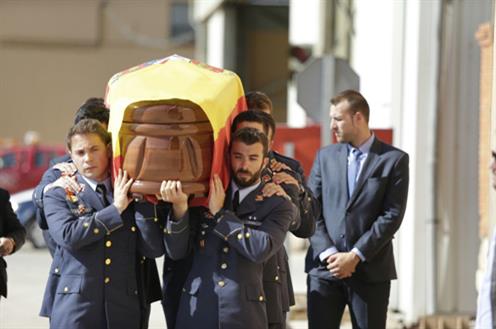 While the cause of the accident is still being investigated, the tragedy serves as a reminder that time should not be wasted arguing over territorial borders, but should be put to use celebrating the gift of Hispanic heritage. 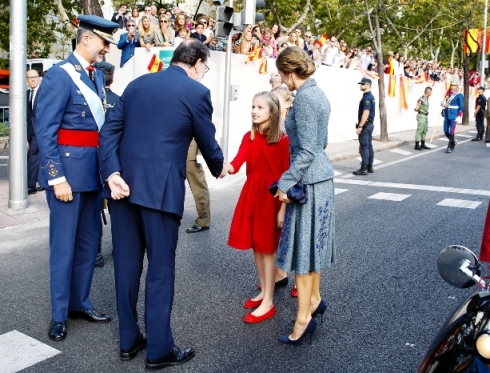 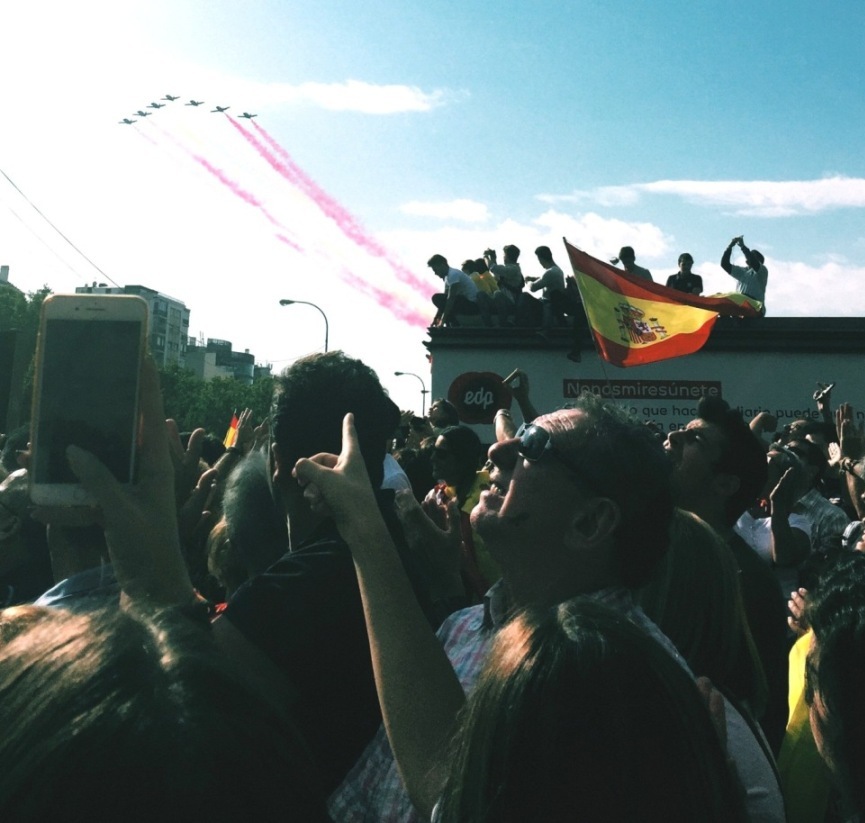 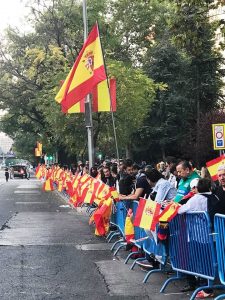 Flags and more flags/ Ministry of Defense, Fair Use 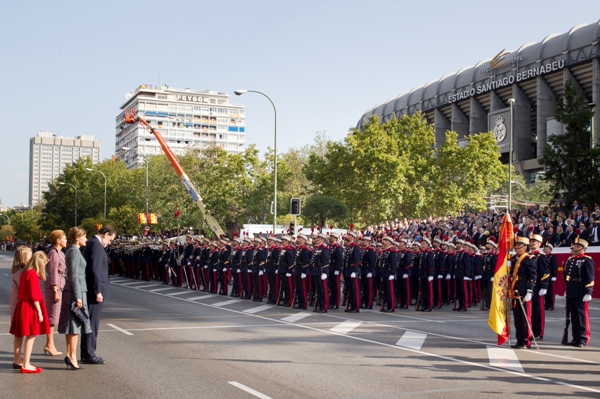 The troops get a salute from the Minister of Defense, PM Rajoy, Queen Letizia and, behind them, Infanta Sofia and Princess Leonor/Pool Moncloa/Fernando Calvo

Previous article « WHAT IN THE WORLD?! 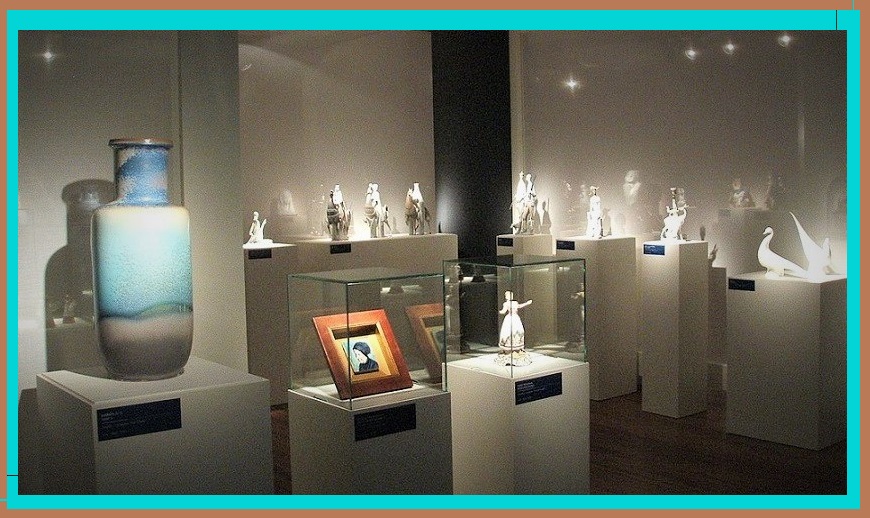 Next article A SECOND OPINION:  A VIEW OF LLADRÓ »