Democrats Abroad Spain-Madrid paid a moving homage to Maya Angelou (b. 4 April 1928) at the Casa de América on the evening of 30th June, just over a month after her death. It was, as the DA said, a “celebration of Maya’s art and activism.”

African-American Maya Angelou came from a dysfunctional family and had a traumatic  childhood but that did not prevent her creative genius from shining through and she became a writer (including 7 autobiographies!), poet (she was prolific and her Just Give Me a Cool Drink of Water ‘ore I Diiie was nominated for the Pulitzer Prize), journalist, playwright (Georgia, Georgia was the first screenplay written by a black woman), professor (with over 30 honorary degrees), composer, director, producer, dancer, actress and singer. And if that wasn’t enough, she was also (or should it be said she was first and foremost?) a Civil Rights activist who had joined forces with Martin Luther King, Jr. and Malcolm X.

The first of her autobiographies, I Know Why the Caged Bird Sings (1969), her life story up to the age of 17, was a bestseller and brought her international acclaim.  There would have been an eighth autobiography but death overtook her. She would recite her poem On the Pulse of Morning at President Bill Clinton’s inauguration, making her the first poet to make an inaugural recitation since Robert Frost  at the inauguration of President John F. Kennedy in 1961. In 2011 President Obama presented her with the Presidential Medal of Freedom.

Participants of the tribute

The DA’s multimedia tribute to Angelou opened with a violin recital of How Great Art Thou and When Great Trees Fall. Her life and time were fondly remembered with readings from I Know Why the Caged Bird Sings, Phenomenal Woman/Mujer Fenomenal, The Mask/La Mascara, I Will Rise by Ben Harper, and Love Liberates from the Oprah Winfrey Network. The  “Human Rights Campaign for Sympathy,” a footage from the Clinton inauguration, was screened.

The Maya Angelou event at Casa America was well attended

Among those participating in the memorable and well-attended event were María Frias Rudolphi, Assistant Professor of American and African Studies at the University of La Coruña, and Eusebio de Lorenzo Goméz, Professor of English Literature and Translation at the Complutense University of Madrid. Jim Merecereau, one of the organizers of the tribute, and Parisa Aryán, tall raven-haired actress who has appeared in many English plays in Madrid, were also there.

It was indeed an evening to honor a great multi-faceted Black American Human Rights fighter .

More of the Maya Angelou tribute 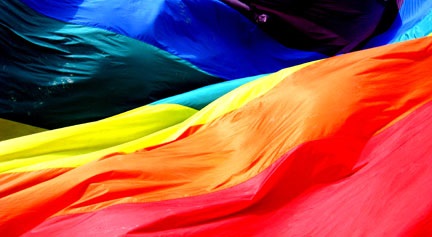 Next article THE LOVELY RAINBOW OVER MADRID »