DEMOCRACY IN SPAIN: IT WORKS! 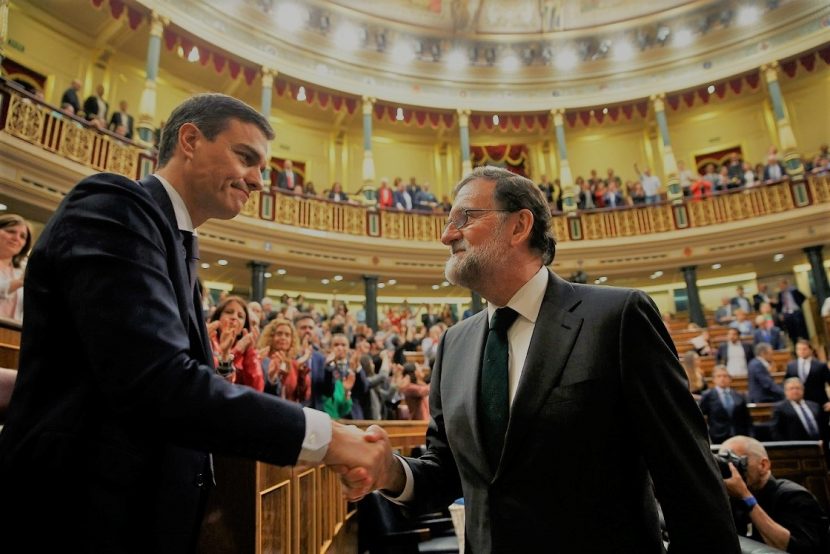 After the Vote of No Confidence, the first of such political instrument
to be successfully used in the history of Spanish democracry: the incoming President
Pedro Sanchez, left, and the outgoing, Mariano Rajoy

Just one day after the Congress of Deputies (the Lower House of the Parliament) approved the General State Budget (Presupuesto General del Estado) for 2018 on 23 May, the High Court ordered the party in power, Partido Popular (PP), to pay €245,492 for having profited from illegal funds obtained through rampant corrupt practices. The approval of the State Budget, which was most crucial for sustaining a government in power in these times of political crisis (systematic corruption causing widespread disenchantment among voters, social issues and threat to Spain’s territorial integrity), was not enough to offset the backlash of the court decision.

The court has confirmed the existence of a Caja B in the Partido Popular, “an accounting and finance structure that ran parallel with the official one and which had been in use since at least 1989.” 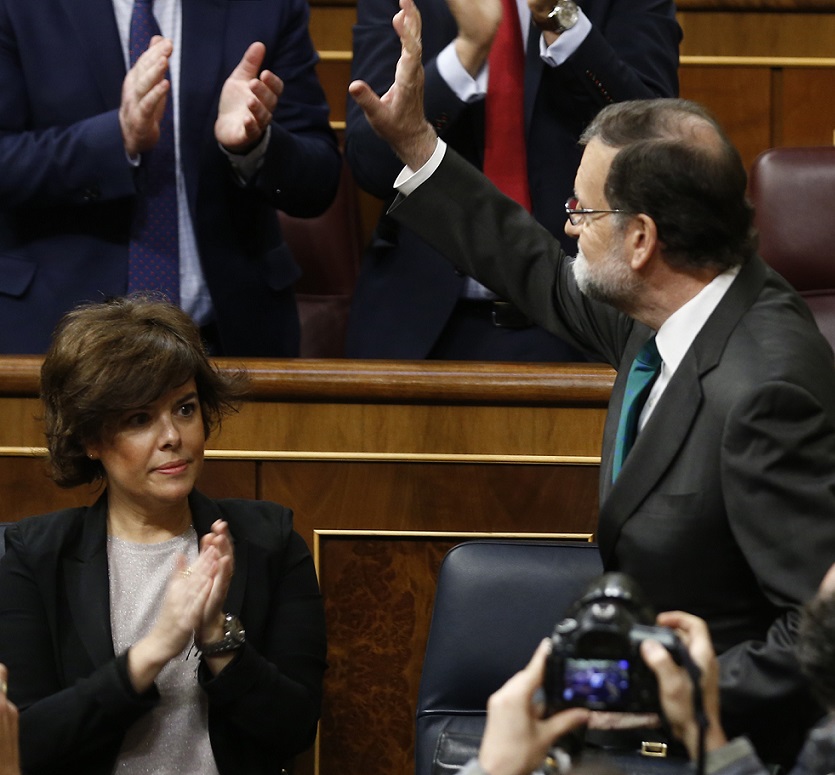 Rajoy takes the floor during the debate on the Vote of No Confidence lodged against him by the presidential aspirant Sanchez. Vice-President Soraya de Santamaria in the Rajoy administration applauds her boss

Among the others who have been sentenced by the court was Luis Bárcenas, former PP treasurer who received a 33-year jail term and was ordered to pay a fine of €44 million for money laundering, tax evasion amounting to more than €11.5 million, and kickbacks worth €1.24 million. In exchange for bribes, the PP facilitated the government’s awarding of public contracts to companies in the so-called Gürtel case.

Ex-Prime Minister Mariano Rajoy was called to testify in court about the time he was PP’s vice-secretary general. He was the first serving prime minister of Spain to do so in a criminal case.

The PP, Rajoy’s conservative party, is widely perceived as converting massive corruption into a way of life. And yet even after the court verdict, Rajoy insisted that his government is blameless, the only guilty party being the PP, the ruling party. His party.

PP has announced that it would appeal the fine, reiterating that the party had not been on trial and, besides, the penalty was a civil one, not criminal.

There was outrage throughout Spain over Rajoy’s unrepentant intransigence. The prevailing sentiment was that the only way out of the untenable situation was to take him out of the government. 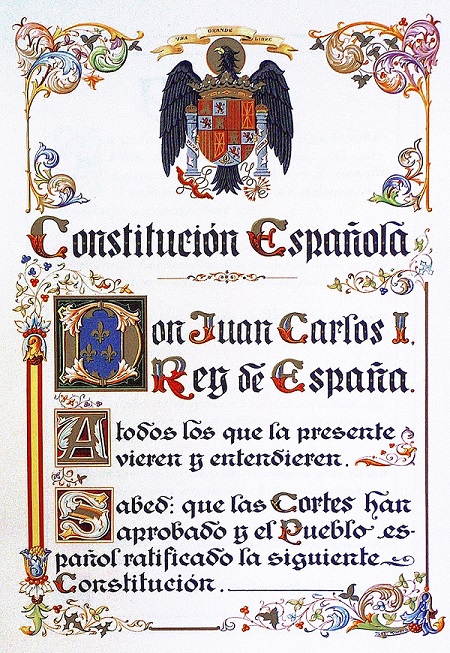 The original Preface of the Spanish Constitution. The Constitution was ratified on 6 December 1978 and went into effect on 29 December of that year

The Partido Socialista Obrero Español (PSOE) proposed a Vote of No Confidence (Moción de Censura) on 25 May, in accordance with the Article 113 of the Spanish Constitution which says that “(1) The Congress of Deputies may require political responsibility from the Government by means of the adoption by an absolute majority of a Vote of No Confidence. (2) The motion of censure must be proposed by at least one-tenth of the Deputies and must include a candidate to the office of the Presidency of the Government.”

Further, Article 113 says that “The Vote of No Confidence cannot be voted on until five days after its presentation.  During the first two days of this period, alternative motions may be presented.”

Thus, Sanchez asked Rajoy to step down. To no avail. After that, the Vote of No Confidence had nowhere to go but forward and on Thursday, 31 May, the political parties with parliamentary representation held a +12-hour debate on the Moción de Censura, staring at 9:00 AM. In the course of the first part of the debate, the Basque nationalist party, PNV, made its much-awaited announcement: with its five deputies, it was going to vote in favor of Sanchez’s presidency.

Those five votes cinched the success of the Vote of No Confidence, insuring that there would be an absolute majority vote.

The PNV was the very same party who made it possible for Rajoy’s government just days earlier to get the General Budget approved by the Congress of Deputies.

Rajoy went to lunch at 2:00 PM and never returned to the Congress that day; he should have been there even if only to listen to the arguments against his remaining as Prime Minister/President of the Government. Instead, he and some of the most trusted members of his Cabinet stayed at the nearby Arahy Restaurant for eight hours. He left the restaurant past 10:00 PM when the debate on the Vote of No Confidence was over.

The following day, historic Friday, the 350-strong Congress cast their vote. A hodgepodge of 180 deputies from the radical and the moderate left across Spain, and the nationalists and separatists in the Basque Country and Catalonia approved the Vote of No Confidence, thereby ousting Rajoy. The vote was four deputies more than the absolute majority required by the Constitution. 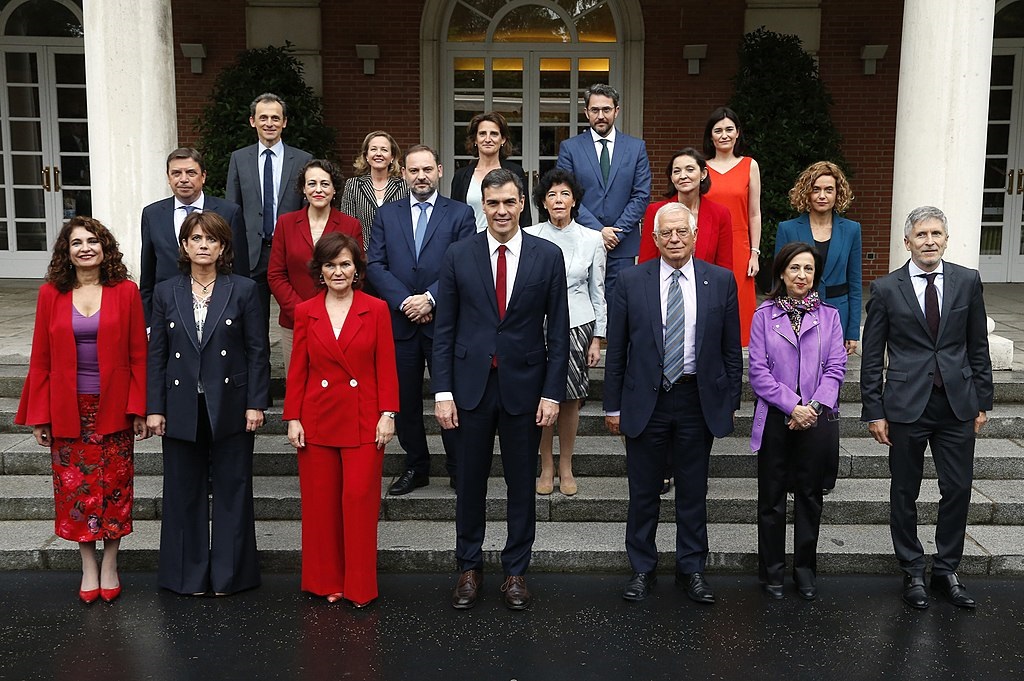 Pedro Sanchez, center, poses with his brand-new cabinet, at La Moncloa presidential palace, following the success of the Vote of No-Confidence against Mariano Rajoy

It was the first time a prime minister has been removed from office through a moción de censura since Spain adopted a democratic parliamentary system of government.

By Saturday, 2 June, King Felipe VI has appointed Sanchez as President of Government, again as per Article 115: “If the Congress of Deputies adopts a motion of censure, the [incumbent] Government shall present its resignation to the King and the [new presidential candidate] shall be understood to have the confidence of the Lower Chamber for the purposes specified in Article 99.  The King shall appoint him President of the Government.”

Article 99: “If the Congress of Deputies, by an absolute majority of its members, grants its confidence to said candidate, the King shall appoint him President.”

One might say that the action of Sanchez and the PSOE stemmed from a spur-of-the-moment decision, the direct result of the untenable situation brought about by Rajoy’s failure to heed the national mood. Moreover, everyone agrees that it’s bumpy road all the way for the new President. But, hey, the democratic Constitution worked! 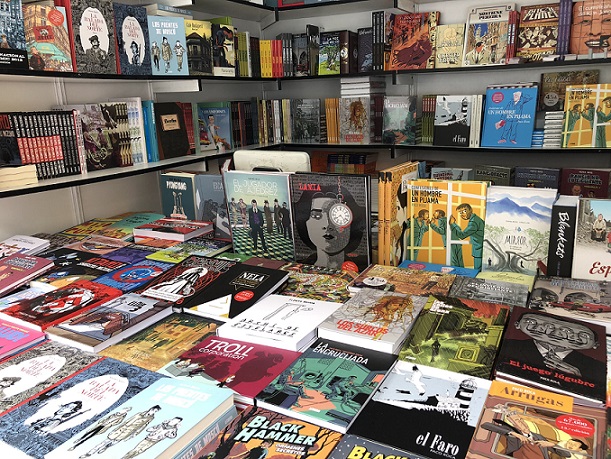 Previous article « ON THE “DEATH” OF BOOKS: THE MADRID BOOK FAIR 2018 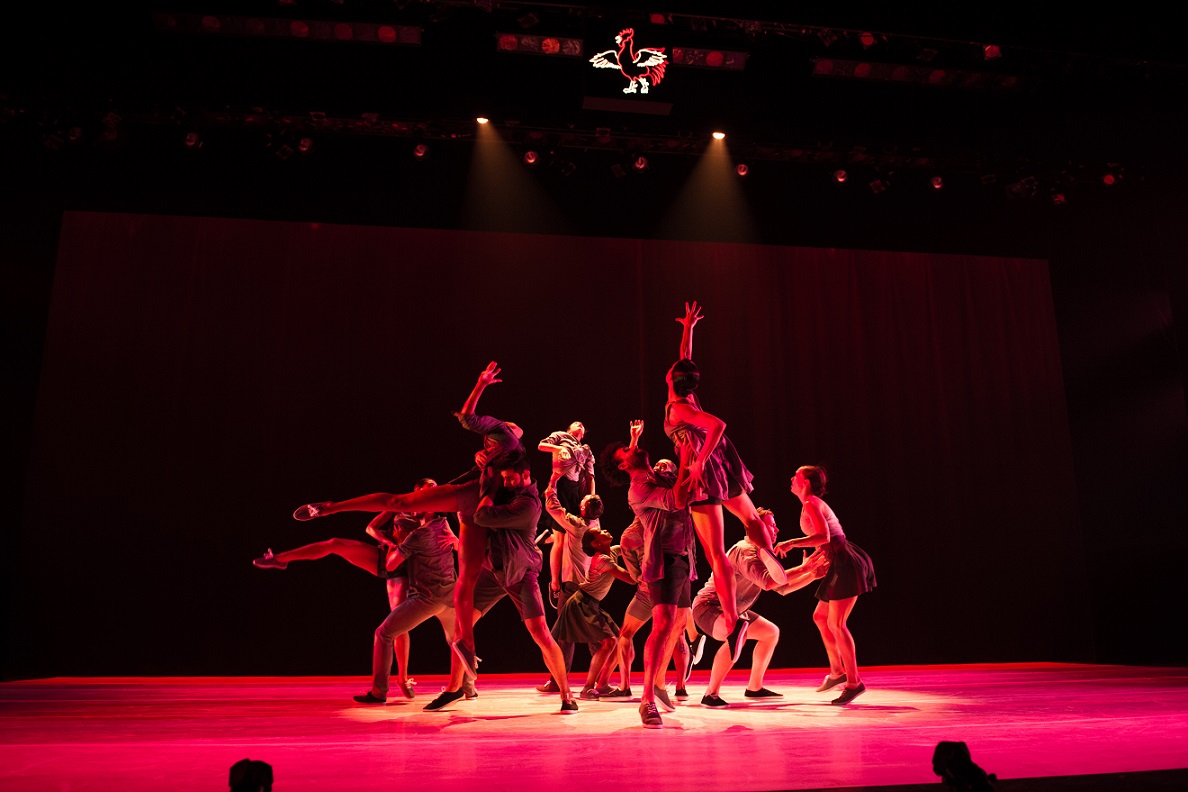 Next article LORCA IN NEW YORK »