DAVIDE FRACASSO, A FABULOUS BAR, AND THE BEST COCKTAIL

If you like rum (and who doesn’t?), you probably have wondered where to find the best rum cocktail in Spain. Well, the answer to that is a lot closer to home than you might have thought. In a classic establishment in Madrid called SantaMaria, an Italian bartender mans the bar — the creator of the cocktail who won the Bacardi Legacy Cocktail Competition, Spain chapter, within the framework of  BACARDÍ LEGACY GLOBAL COCKTAIL CHAMPIONSHIP, one of the most prestigious cocktail competitions in the world. The contest kicks off on national stages and culminates in a global final in which each national winner competes to become the BACARDÍ Legacy Global Champion.

Walk in, go down the steps of the SantaMaria Coctelería (cocktail bar), and you’ll find Davide Fracasso there, an Italian from Venezia who planned to compete in the BACARDI global finals representing Spain. His creation? “Character”, a cocktail made with Bacardí Rum, carrots, salted coconut syrup, lime and agua de mar (seawater) salt.

SantaMaria is on Calle Ballesta in Malasaña, Madrid’s hip neighborhood packed with places to sit in, eat, and enjoy a drink that invariably turns into an experience you would want to repeat. And repeat. SantaMaria is a small and charming bar helmed by five inspired barmen (barpeople) forming a dream team capable of casting a spell on the people who dare enter the den: Julio de la Torre,  Frederick Castillo, Fracasso Davide, Sara García and Iñaki Font, 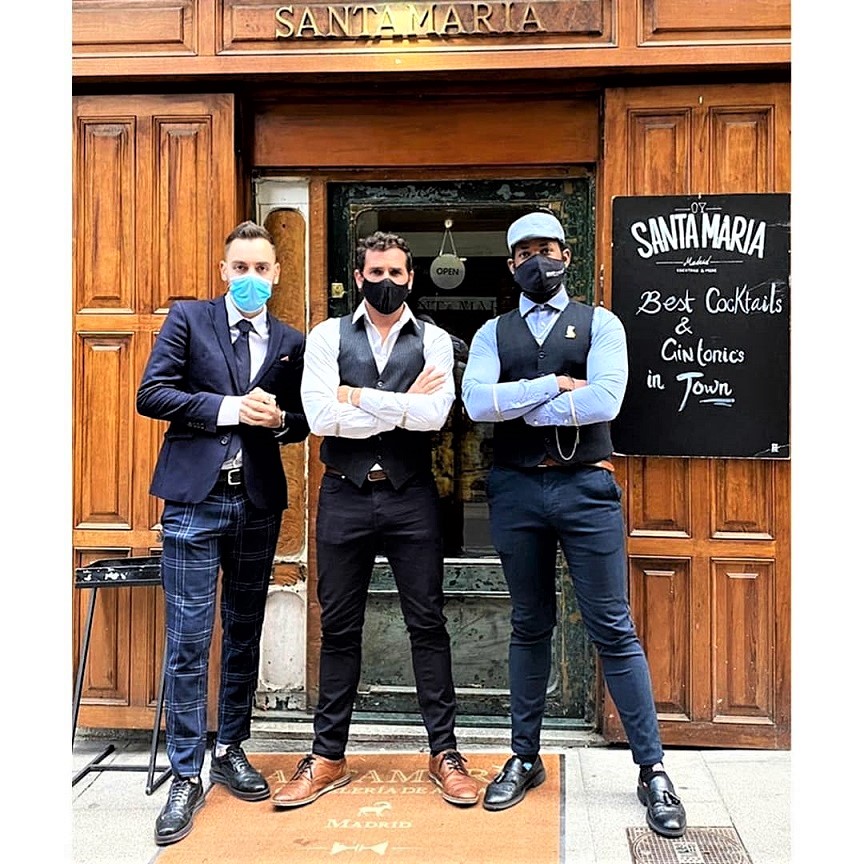 Three of the fabulous bartenders

SantaMaria carries the imprint of each of its stellar barmen. It is a place for people, founded with the love of those who made it what it is today, delivering their best and creating a personalized offer to all individuals who walk through their small and almost hidden door.

I first went to SantaMaria with my cocktail professors and was enchanted by its muted lighting, its classic decor and, most of all, the style of the barmen. Davide, a cocktails artist of the first caliber, came up to me and struck up a friendly conversation. Realizing I was a Brazilian, he lost no time making me one of the best cachaça cocktails I’ve ever tried. He continued to surprise me every time I came back to Santa Maria. 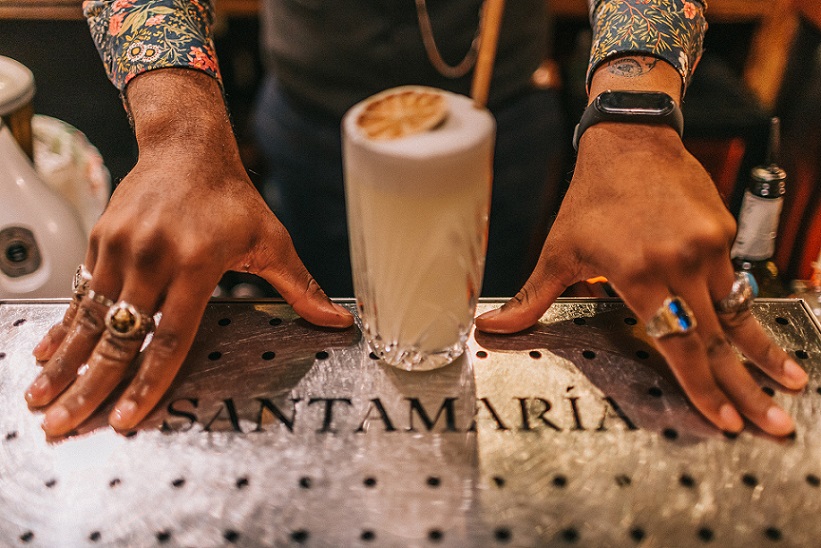 The SantaMaria drinks are created with the unique personality of the clients in mind. One look at you, one simple question, and a couple of minutes later they are back with what may yet be your newest favorite cocktail!

Amazed by the personalized offer, I decided to further explore the world behind the bar in SantaMaria. Talking to Davide, I got to know a little bit about his life story which, at present, has culminated in his creation of the cocktail that won him the Bacardi Legacy Competition.

Davide Fracasso served his first cocktail at age 13 — a negroni. Which experience made him realize that this was what he wanted to do for a living. After studying the hospitality industry at home and working at the town’s bar, he found he loved talking to people and making them something they like. In a bar in Valentino, Italy, where he worked as a manager, he mixed flavors and created cocktails that became his clients’ favorites; whereupon,  they stopped ordering the classics and happily took what Davide offered. 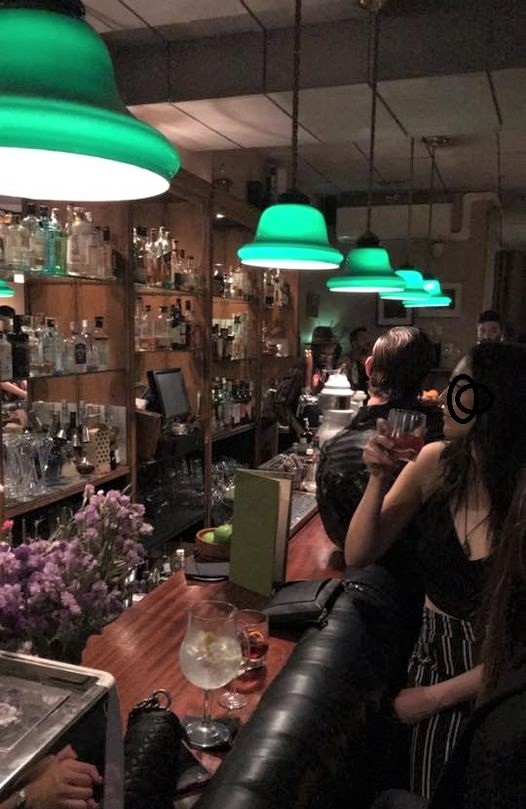 The unbeatable ambiance in the cocktail bar

At 19, he moved to Mojacar, a small town in Spain, where he went around with his CV looking for a job. He found one with a killer schedule:  11 am to 3 am. Eventually, he tossed a coin and let it determine his destiny. Well, the coin sent him to Madrid with whom he fell in love from the very first minute. In the nation’s capital, he repeated his modus operandi of leaving his CV in the best places and winning everybody over with his chatty personality and the passionate aura about him. And that’s how he ended up in the SantaMaria six years ago.

Davide believes that a bartender’s job is to make you like him and trust him to the point of believing him when he tells you, “Let me make you something I know you’re going to like.” By then, he will have established a uniquely personal relationship with his client.

During our interview on a Tuesday afternoon, we had to pause because a client walked in. Davide knew him by name and got ready to serve his usual drink. But the man had a dream the night before and ordered a negroni instead. They talk for a while: about the man’s job, his family, and the new phone he was going to buy that afternoon. It was like a conversation between old friends. 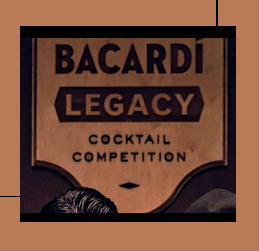 I believe that that approach has much to do with Davide’s successful career.

In 2019, Davide signed up for the Bacardi Legacy Competition in Spain, following the little voice that said “Do it.” The competition tells you to create a cocktail that can be made and found anywhere in the world, sells a lot, and develop a marketing technique that puts it among the global classics.   You send a picture, the recipe and a little description of the philosophy behind your cocktail.

Competing against barmen from all over Spain, Davide ended up among the top eight. He then competed in the semi-finals in Madrid, moving up to the top three. At this stage, Bacardí gives you a bottle and monetary budget to develop your “brand” within three months, with goals such as gathering money for charitable causes, installing yourself on social media and positioning your cocktail at different selling points around the globe.

The fear, anxiety and stress of not making it were a constant in Davide’s life. In February 2020, he went to Oporto to compete for the Spanish finals, and once he got there, he thought: “Davide, you’ve never been to Portugal, and if you succumb to fear and anxiety, you will never enjoy the present. Just enjoy Oporto.” There, he won the Spanish national competition. 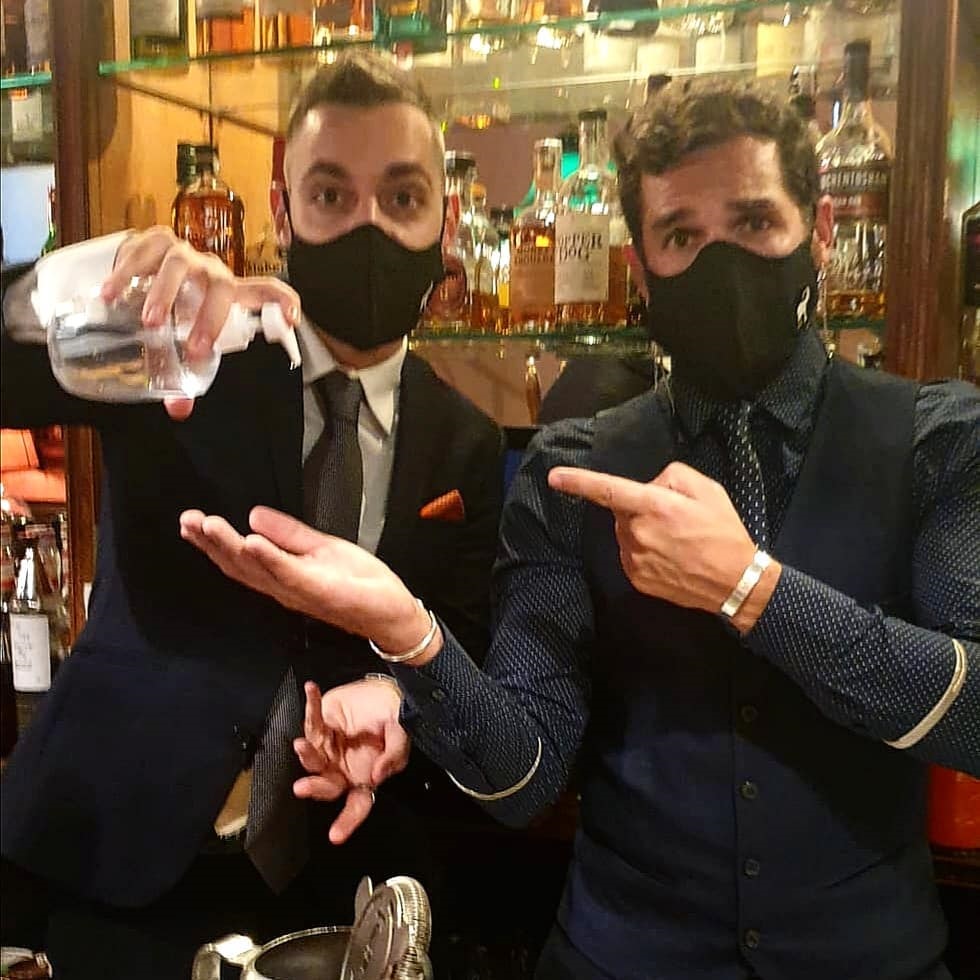 The pandemic got in the way of live Bacardi Grand Finals

“It was a constructive happiness — once you trust your idea and keep on going on with it because it’s yours, you’ll achieve greatness,” he tells me with sparkly eyes. The ultimate step was the BACARDÍ Legacy 2020 Grand Final which at first was thought to be held in Miami.“I dreamt about the competition but also dreamt about jogging on Miami Beach, with a calm stomach and soul, living the experience like I did in Oporto. I just needed to remember that behind all greatness we are just people.” This was the very philosophy that drove him to create “Character”, his winning cocktail at the national level (as opposed to global in the Grand Final), followed by the logo “We are unique.”

Unluckily, because of the pandemic, the finals had to be postponed to June 2021 and, besides, it had to be just virtual. Davide was among the 39 competing bartenders in the virtual global finals which were decided by a panel of judges in London. 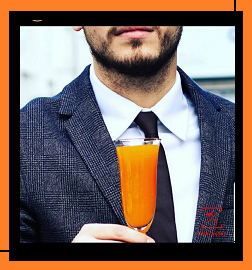 Davide’s cocktail bears his love for uniqueness: The carrot, which is a root, represents our connection to the Earth; all of us, whether we like to or not, inhabit this planet so we might as well treat it right and with respect. The coconut symbolizes Bacardí. And the agua de mar (seawater) symbolizes infinity, within whose vast emptiness we will discover ourselves.

The underpinning of “Character” is simple. Says Davide: “Each person is unique — and yet society has cataloged us, tells us what we can allow ourselves to do and who we can be. But with “Character” – through our cocktails – I want to show that there is no discrimination. With “Character”, I search for peace and acceptance of all humans who are as unique as they are equal.” 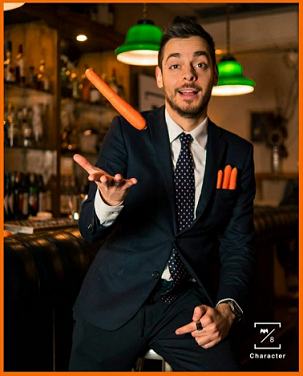 “I search for peace and acceptance of all humans who are as unique, individually, as they are equal”

“This is the philosophy I feel most comfortable with, after all the experiences I’ve had,” Davide declares. He believes that “every act of goodness will revert back to the doer of the deed, and I guess that is a common notion among all of us bartenders. We all love this sector we work in and love serving people and mixing good flavors. But above all, we must not forget that we are people. Behind all greatness, there is a character that takes you to the good experience of consuming a drink.”

It’s a simple philosophy, as simple as making a negroni for a client.

Davide didn’t run away with the heavy trophy for the winner at the Bacardi Grand Finals. Praphakorn Konglee from Thailand’s Find the Locker Room bar did with his “Out of Sight” cocktail. But it doesn’t matter. Davide has got a winner’s job at Santa Maria and a winner’s philosophy in life. 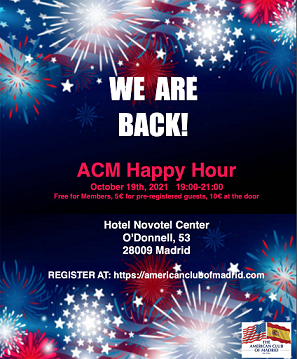