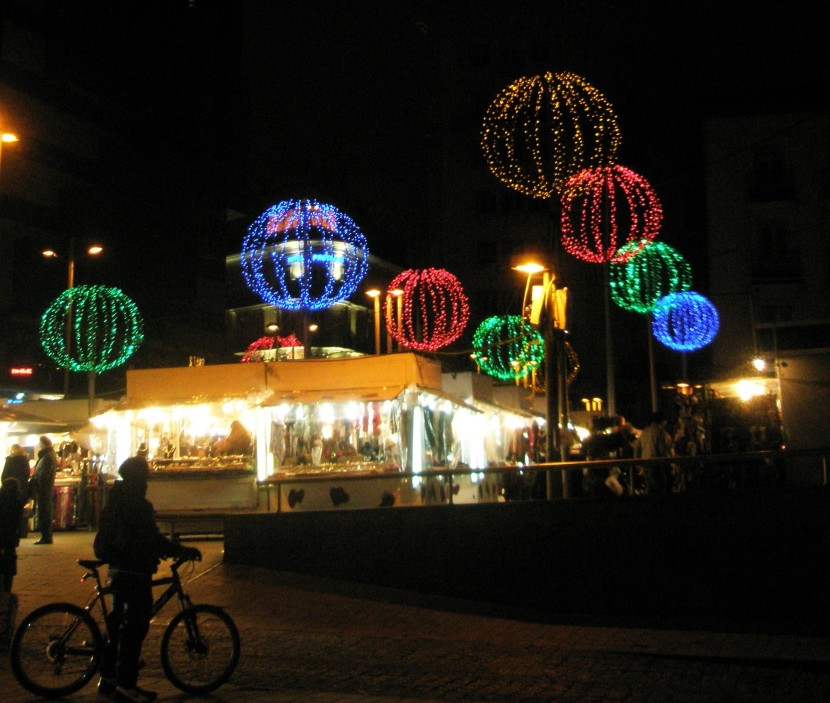 Spain is still blissfully traditional when it comes to Navidad. For an irrepressible people who have a knack for converting any gathering into a fiesta, their celebration of the Holiday Season is remarkably subdued – which is not to say wan and lifeless.

This Catholic country on the southwestern tip of Continental Europe has miraculously succeeded in preserving Christmas (and the Feast of the Three Kings on 6 January) as a celebration of the Birth of the Savior. But then that’s what Christmas ought to be, only something went wrong down the road and it has become the Western world’s biggest yearly commercial heist.

In Spain there are still traces of religiosity underpinning Navidad. And this may very well have something to do with the Spaniards’ instinctive recoil from gross commercialism. Consequently, when these people think of gift-giving on Christmas they trek to the mercadillos, as they’ve been doing for centuries. Mercadillos are itinerant outdoor markets that are mounted on special occasions. They are different from the rastros and rastrillos (flea markets) in that mercadillos usually sell brand new goods only.

More stuff to keep away the cold.

In a sense, giving gifts bought from the mercadillos means that much care went into choosing the gifts. Not having been mass-produced , the choice is limited, and yet each piece could be unique.

Customarily, mercadillos are held at the central plazas of the city. In the center of Madrid there are about half a dozen mercadillos in which to imbibe the beautiful spirit of Spanish Christmas while making one’s purchases. There’s one on Plaza de España which is more like a feria (fair). Indeed , it’s called feria mercado. It specializes in handcrafted goods that only the dedicated artisan is willing to expend so much time on.

The mercadillos on Plaza de Santo Domingo, del Carmen and Moncloa tend to be “practical,” more concerned with stuff to ward off the cold. And Madrid, at an altitude of 800 meters (2625 feet,) could sink down to freezing temperatures for days on end in winter.

are retailed at rock-bottom prices that have not been adjusted to inflation for years now.

The magical lights at the mercadillo on Plaza Benavente.

If you plan to go mercadillo-trekking – and you should – better start from Plaza Benavente (leave the mercadillos of Moncloa, Santo Domingo and Carmen for when you’re in a more prosaic mood and Plaza España for “serious” shopping). And we suggest that you make it at nightfall so you could lose yourself in the Christmas lights. Nothing gaudy about them, we can assure. Magical is more like it.

The mercadillo at Plaza Benavente mimics a medieval town but there’s nothing contrived about that. The ambiance is great, as only old plazas can provide.

A “medieval village” at Christmas.

Strictly speaking, though, Plaza Benavente is rather “new,” having evolved as such from the first half of the 19th century. It is, however, located in the same area where one of the extant buildings, the Palace of the Cinco Gremios Mayores, known today as the Dirección General de Tesoro, was built in the 17th century.

From Benavente go westward through the Plaza de Santa Cruz for the grand finale at Plaza Mayor. Plaza Santa Cruz, as such, dates back to the reign of Philip II (1556-1598). Talk about old and castiza! And yet the mercadillo on this plaza that the Ministry of Foreign Affairs faces is “modernistic,” its unique attraction being those comical hairpieces and scary masks  for the young party-goers which, on the other hand, anybody at all can wear wherever, for the sheer fun of celebrating Christmas.

And now the mercadillo de la Plaza Mayor, reputed to be one of the most beautiful mercadillos in Spain – if not the most. On this very spot mercadillos have been held since the mid-19th century. (The construction of the plaza began in the late 16th century.)

And now the Plaza Mayor.

You can hardly find artisanal crafts here. What abound are Christmas décor, not least Nativity scenes. And

pedigreed tons of evocative ambiance. It will be a mortal sin to give it a miss. If you do, you’ll find your shoe filled with carbón (charcoal), courtesy of King Balthazar of the Orient, on the morning of 6 January. Or didn’t you know? Truants don’t receive presents from Their Oriental Majesties when they make the rounds of Spanish homes. Instead, they get charcoal from Balthazar.

Better be good. Do the mercadillos. 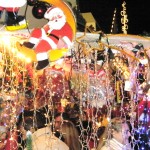 There’s room for Santa at the Plaza Mayor . . . 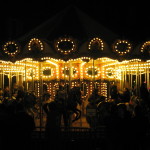 and a carousel to delight the kids endlessly . . . 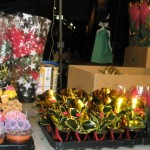 and poinsettias to deck the living room. 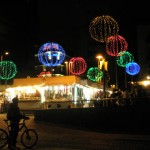 This is the mercadillo at Plaza Santo Domingo. 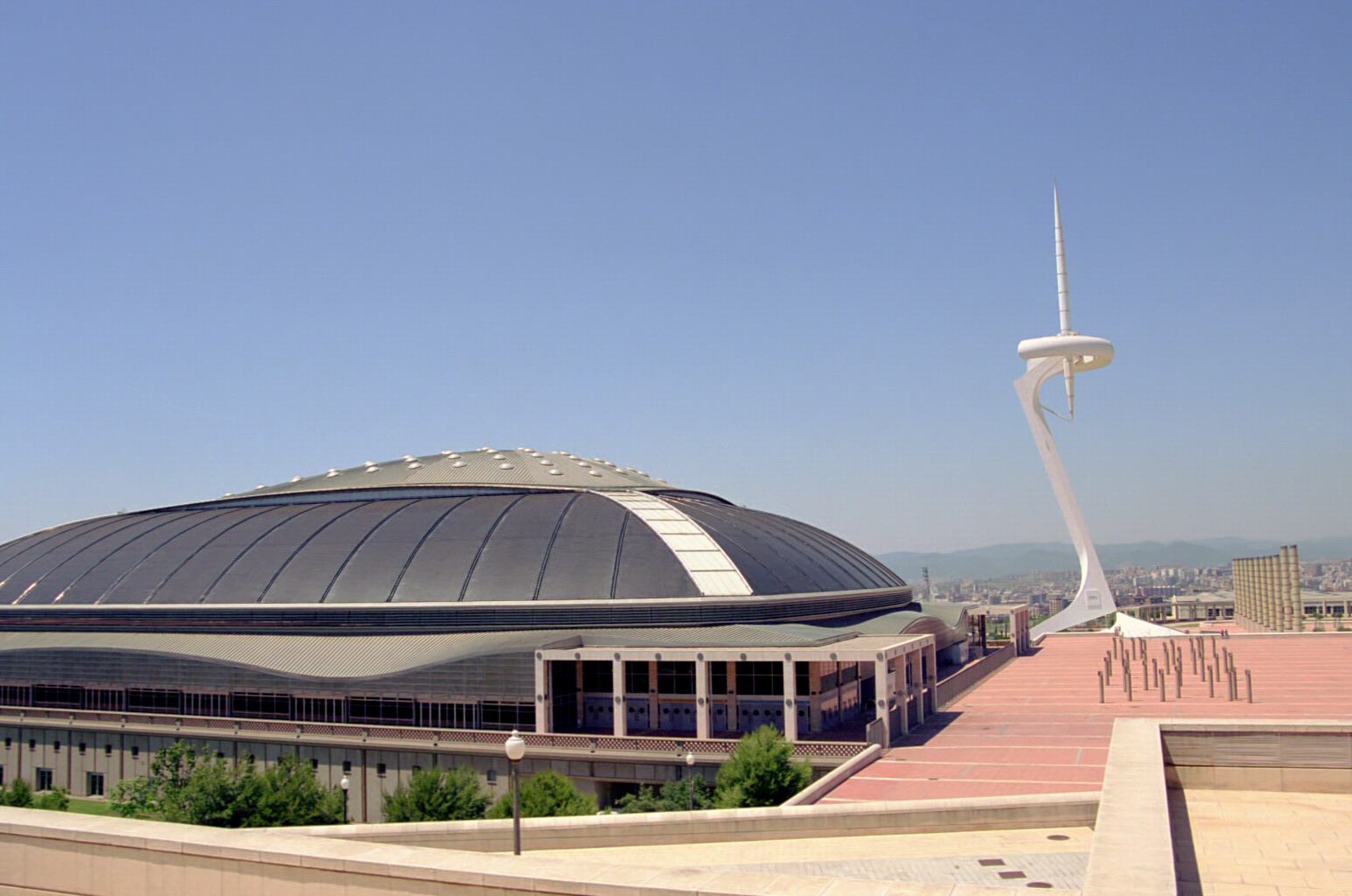 Next article “CATALONIA IS SPAIN” FORUM (4) »