The greatest show in football

“It’s crazy to think we’re in the Champions League final,” a euphoric Atletico de Madrid midfielder Tiago Mendes said. “But this team deserves it after everything it has accomplished.”

When Atletico beat Chelsea 3 –1 on 30 April it qualified for the UEFA Champions League final. Against who? As everyone knows since the day before that fateful win, against Real Madrid who beat Bayern Munich 4-0 on the 29th of the month.

History was thus made in Europe’s premier club football tournament. It is the first time ever that two teams from the same city will battle it out for the title. This is not the first time, however, that an all-Spain Champions League final will be staged. In the 2000 the two final contenders were Spanish: Real Madrid and Valencia Football Club.

The historic match, described by the media as the biggest game in club football, will be played at the Estádio da Luz in Lisbon, Portugal, on 24 May, as was decided at a UEFA Executive Committee meeting in Istanbul, Turkey, in 2012. Home to former European champion Benfica, the Estádio da Luz, Portugal’s biggest stadium, was inaugurated in 1954 but was rebuilt in 2003 to host UEFA’s Euro 2004.

Madrid, which has been feeling a little down in the mouth lately, is absolutely excited about the match. Maybe its three successive bids to host the Olympics have been humiliatingly rejected, and it is losing to Barcelona in the all-important tourist industry, but it has just won the greatest distinction of all (football being Spain’s overriding passion): the unprecedented double representation in the Champions League final!

There’s no two ways about it: Atlético is the underdog here. It has been struggling with a daunting fourteen-year winless streak. Mercifully the curse broke in the 2012-13 season when the long-suffering rojiblancos (red-whites, in allusion to the Atletico’s red-and-white stripe uniform) beat their city rivals 2-1 in Real’s turf, the Estadio Santiago Bernabeu, on 17 May 2013, thereby bagging the Copa del Rey trophy. Atletico repeated the caper on 28 September of that year in a 1-0 victory and took away the Liga title.

It is said that Atletico was the first favorite of the Franco regime, which was responsible for converting football into national sport and a major political force in Spain. But Franco dumped Atletico in favor of Real in the 1950s after the latter’s stunning string of victories in the European Cup/Champions League finals (from 1955 to 1960), apart from local wins in La Liga (1953–54, 1954–55, 1956–57, 1957–58).

It is alleged that the Generalisimo sought to gain political capital by ostentatiously patronizing the amazing Champion’s League title holder.

Since then Real Madrid is known as the team of the Establishment while Atletico got tagged as the rebel team.

In terms of revenue, Real is the world’s richest football club with a yearly take of €513 million. Worth €2.4 billion (US$3.3 billion) it is at the same time the most valuable sports team. And it has no peer where it counts most: a record of 9 European Cup/UEFA Champions League titles; 3 Intercontinental Cups; 2 UEFA Cups; 1 UEFA Super Cup; 32 La Liga titles; 19 Copas del Rey; 9 Supercopas de España; 1 Copa Eva Duarte; and 1 Copa de la Liga.

The appearance of Real in the 2014 Champions League final will be its 13th, an unmatched record among the football clubs. It will try to break its own record and win its 10th trophy. Atletico, for its part, will try to win its first.

No doubt the hinchas (avid fans) of both the rojiblancos and Real will be ferociously cheering on their respective teams. But there’s been a winner already, ever since the Madrid teams qualified for the finals: Madrid, that lovely city nobody and nothing can put down no matter how severe the trials. If it can nurture two great football clubs, it can only be because it’s a great town!

Whichever team wins will play against the winners of the 2013–14 UEFA Europa League in the 2014 UEFA Super Cup, and be UEFA’s representative at the semi-finals of the 2014 FIFA Club World Cup.

Lisbon at 1202% more than the average price!

In Spain, Real Madrid and Atletico de Madrid are given 17,000 tickets each to sell but it is estimated that this will not cover even 10% of the requests for tickets from their followers. (UEFA has 27,000 tickets.) A ticket at this late date will therefore almost literally cost a small fortune. Some say it is “priceless.”

Some reports say that the price of an overnight at a hotel in Lisbon during the Champions League final starts at €1,500.

Hospitality.net reports that according to the trivago Hotel Price Index (tHPI) “the current price of a standard double room in Lisbon on Saturday 24th May, for the Champions League final, is an average of £1,171 [€1427]. This is an astounding 1202 percent increase from the monthly average during April, which was just £90 per night.

A deluxe package of double room in a 4-star hotel (Sheraton) + ticket, according to Global Event Forum, costs €3,069 ($4,275). The trouble is not only the price that’s way up high but also the fact that the package is now sold out!

How about a trip on a shoestring?

Surely it could be possible? A few days ago Guidepost spotted an ad for a one-way bus trip to/from Lisbon at €59. (Will it still be available or is it sold out too?) And Renfe, the Spanish railways company, is adding 2,000 extra seats for the return trip from the grand match. You might of course go in your own car and come back home on the night of nights, skipping hotels. Lisbon isn’t that far from Madrid. 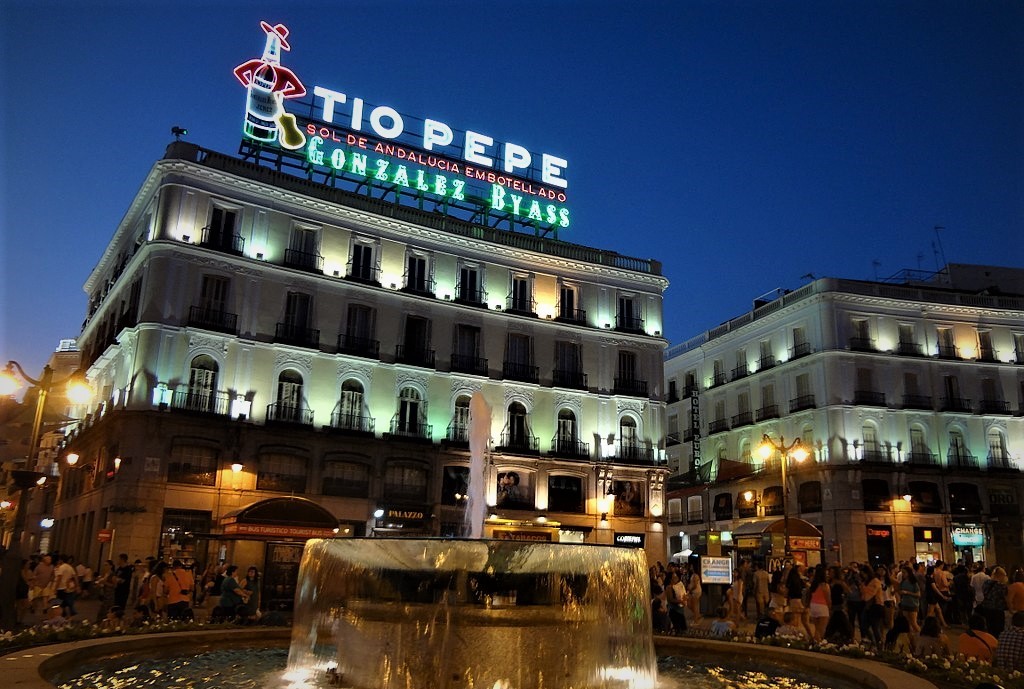 Next article EDITOR’S BLOG: Tio Pepe is Back! »