CAVALIA’S ODYSSEO: If wishes were horses . . .

The show is utterly magnificent! The creativity, artistry, orchestration, acrobatics, set design and composition, and the outstanding horsemanship of the 45 humans involved with 65 of the most beautiful and intelligent horseflesh on the planet makes Odysseo a rare and wonderful sight to see.

There are  25 Spanish purebred horses in the show’s line-up, 18 Stallions (no mares) and 47 of the horses are geldings. The average age of the light-footed breeds is 9 years old, with the youngest 6 and the oldest 16.

Jonathan Gil Delgado is one of the Spanish riders, and Ramon Molina Gonzalez is a Spanish trainer who comes periodically to join the group. The Spanish horses come from all parts of Spain, carefully selected for the show.

In this extravaganza, there are 48 artists, representing 11 countries including the United States, Canada, Brazil, France, Guinea(Africa) Poland, Russia, Spain, Ukraine, Japan, and Italy. These are the acrobats, aerialists, riders, dancers and musicians that create an ensemble that takes one’s breath away.

The big White Top tent is a marvelous feat of engineering in and of itself, with rear-projection screens changing landscapes, and at one point taking you up into the clouds and out into the universe. There is plenty of room for the horses and riders to gambol and the acrobats to perform, and as Katie Schoen of Lawrence Public Relations said to me “There are no bad seats” for enjoying the event.

In this most unique show, the horses are the stars, and the humans interact with them with the utmost gentleness, guiding them with unseen commands. It is so obvious that these animals have been pampered and trained with tender touches and love and kindness, that it is no wonder they respond so well. 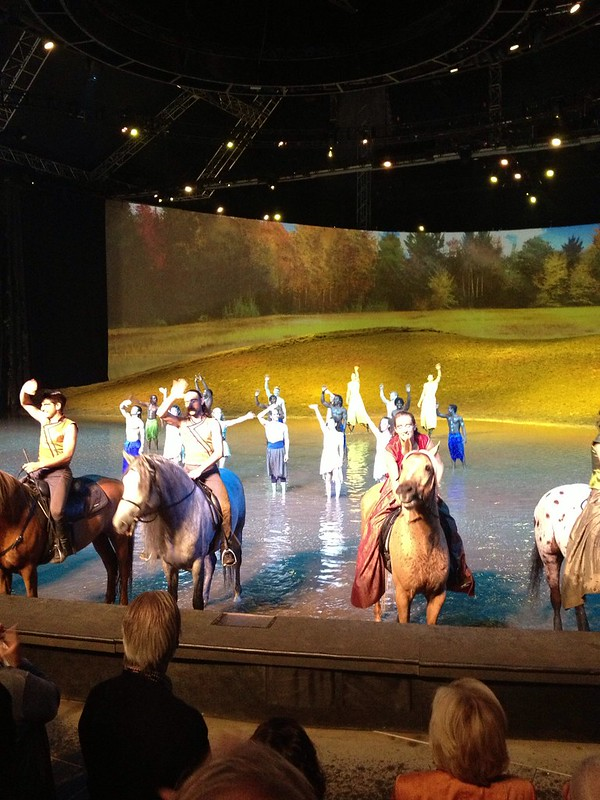 Any horse aficionado would do well to catch this show, which so far has traveled throughout North America, including Canada, where it originated, and the United States and Mexico.

The human elements in the show are dressed in some of the most gorgeous costumes you’ll ever see, and the choreography by Darren Charles, and in the original show by Alain Gauthier, is simply marvelous. Special effects and music by Michel Cusson, under Nomand Latourelle lend a mystical background to the show which has touches of the sitar and the middle east.

Since 2003, Normand Latourelle has been the Artistic Director of Cavalia, Inc. In 2007 he received the Ordre national du Quebec for his achievements for instilling his talent, passion and imagination into these productions.

The director of the show is Wayne Fowkes of Leeds in the U.K. He now lives in Austria with his family. The outstanding set designer is Guillaume Lord.

The 65 horses in the show represent 10 different breeds from around the world. They come from 7 countries including Spain, Portugal, France, Germany, Australia, the United States and Canada.

They can’t all be named here, but the Spanish purebreds include the following:

The others include Arabians, Quarter Horses, Thoroughbreds and Paints, among others.

Valentina Spreca does the vocals in Italian with grace and inspiration. There have been more than 1100 performances in North America, mesmerizing more than 1.8 million spectators. 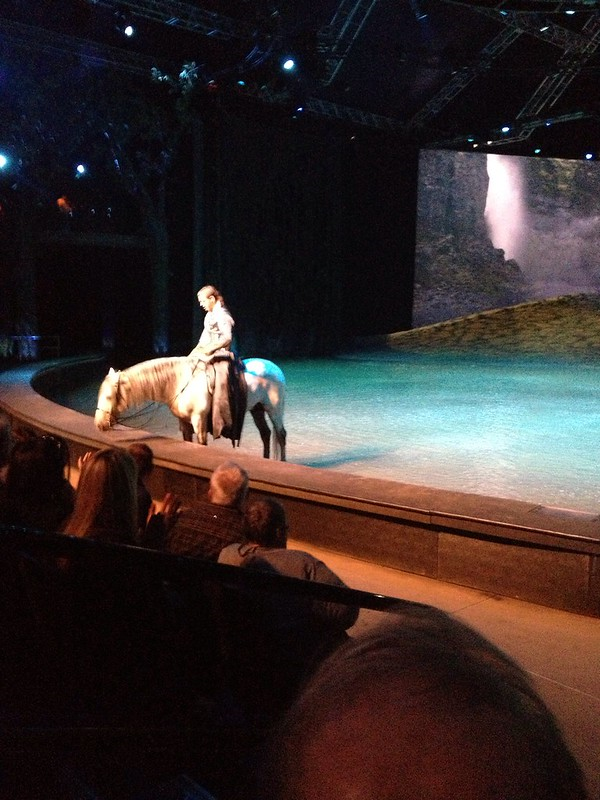 The poetry of motion, the colorfulness and elegance of the riders and acrobats, the atmosphere created by the set design, choreography, music and costumes and the obvious respect for the four-footed stars of the show, made Odysseo by Cavalia a feast for this reporter’s eyes and spirit!

To find out where the troupe will be heading next,  and further information on one of the most spectacular events you will see in a lifetime, go to http://www.cavalia.net!

Tickets for the performances range from around $60 to the $249.50 V.I.P. which is about special treatment including the best seats in the White Top, special wine and beer etc., lounge and tour of the stables after the show. 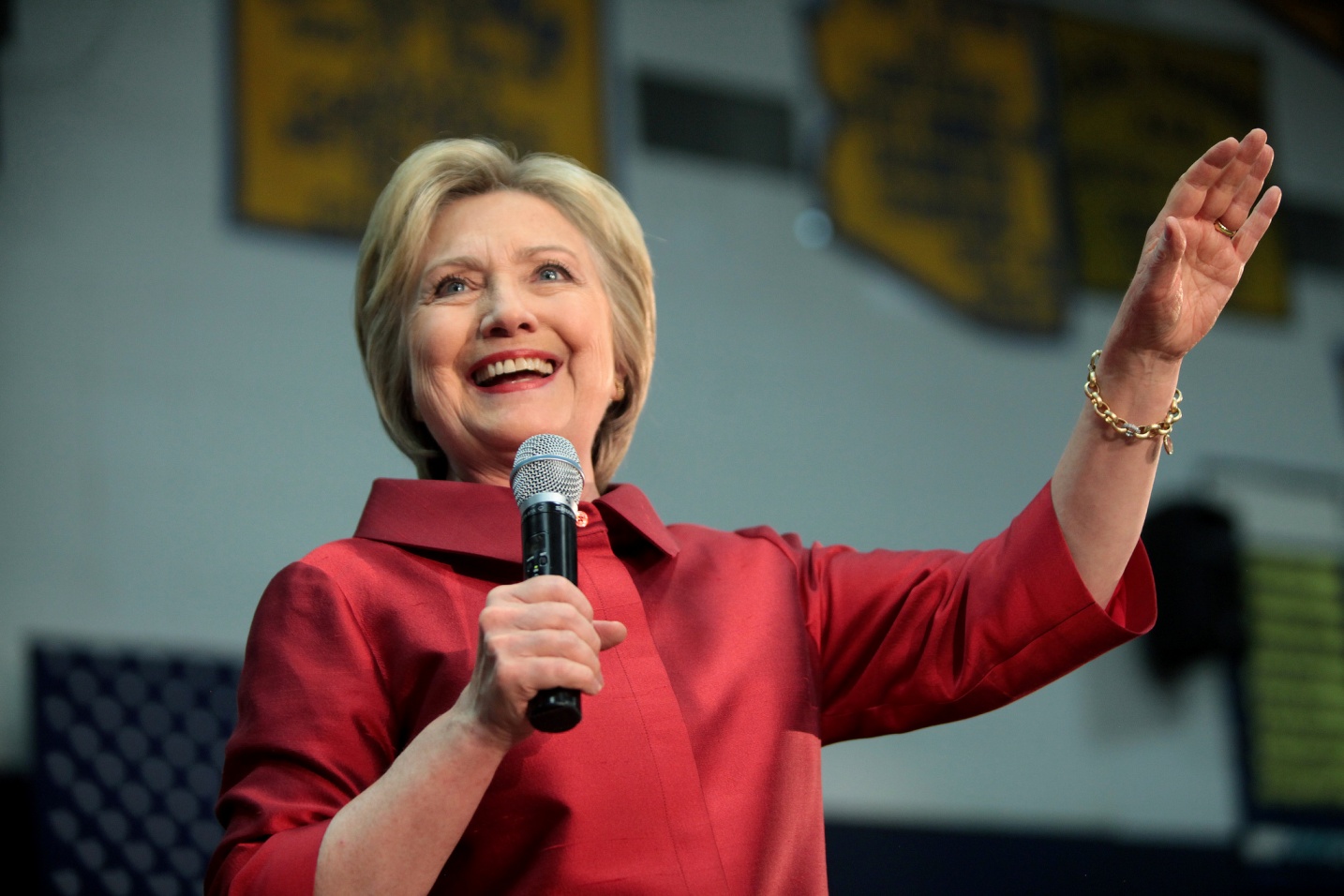 Next article OLYMPICS 2016: POWER TO THE SPANISH TEAM! »