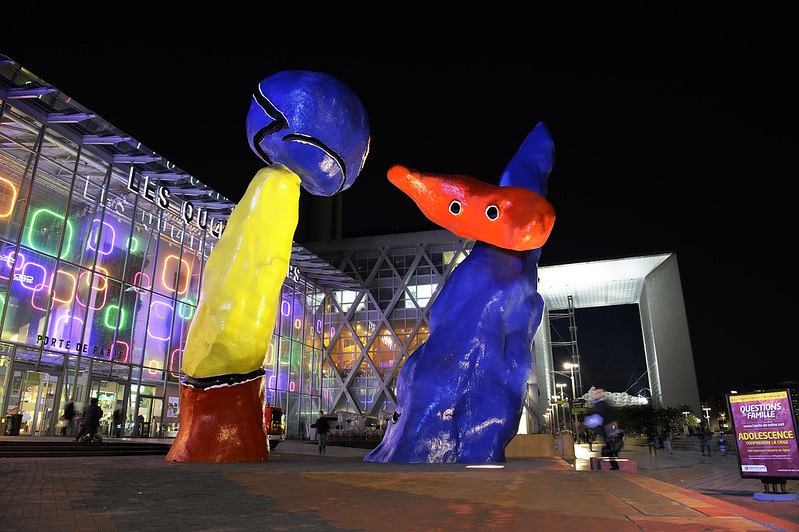 The Sala de Exposiciones de la Caja de Pensiones “La Caixa” located on the Paseo de la Castellana, 51 has been showing a group of sculptures by Juan Miro since the 23rd of November. At the time of writing, the exhibition is still going on. I don’t think that anyone really knows exactly when it will be dismantled but if it is still on when this reaches print I would highly recommend a visit. If it has already been closed then maybe I can give you some idea of what you have missed. 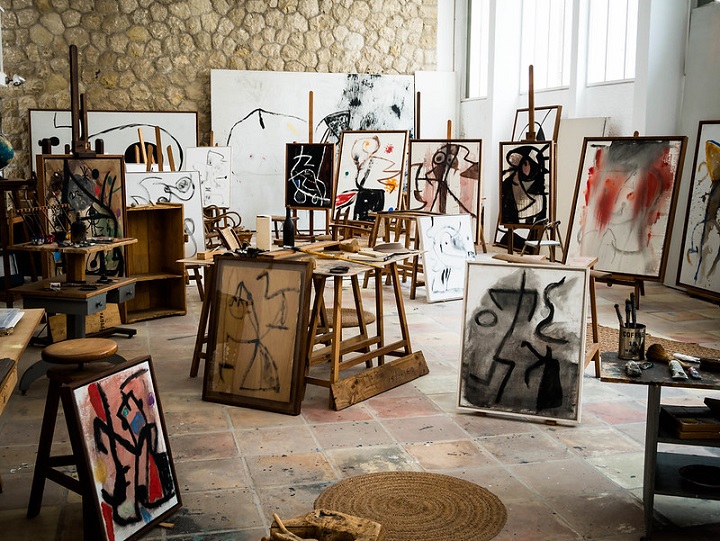 Miró’s atelier in Palma de Mallorca:  There is a long history of painters trying their hand at sculpture

So much has been written about Joan Miró recently that it really has become increasingly difficult to add anything to the mass of available information and critical speculation that has been inundating the public with increasing intensity as this Catalan grows older. It is not really surprising that Miró should have produced a large body of sculptural work. There is a long history of painters trying their hand at sculpture, the list is almost endless, Degas Monett, Renoir, Picasso, etc. Then there are the sculptors who have tried to paint, some very successfully such as   Giacometti, Michelangelo and Modigliani.

Surprisingly Miro’s sculptures are quite a bit more figurative than his paintings; they remain however uniquely Miro. He creates in these bronzes a world of fantasy, filled with humor and whimsy. Peopled by personages whose heads are composed of pretzels and whose hats are constructed from funnels. They are obviously harmless and friendly aberrations. Composed of discarded objects, whose overall aspect creates a lovely aesthetic which is immediately recognizable as belonging to Joan Miró. 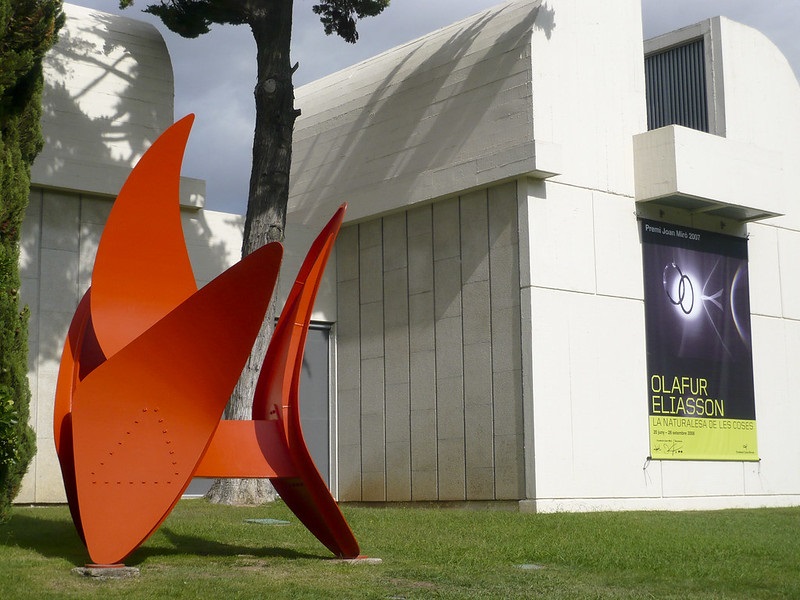 The sculptures bear a great resemblance to the creatures in Miró’s paintings, these personages, however, because they are not as illusionary as the painted ones, have a greater degree of relationship to everyday things, recognizable objects keep emerging in the strangest places as integral parts of the anatomy of these strange people. There is a propensity for the topmost forms to be delicately balanced upon a precipice, reminding one of a tightrope walker who is just managing to stay upright.

The catalogue lists 33 pieces, but in addition there are numerous photograph blowups of Miro at work creating sculptures. While my knowledge of bronze casting is admittedly limited, I rather doubt that the impression created by the photos is quite accurate. These bronze pieces look to me to be technically rather difficult to cast and I would strongly suspect that Miro probably had access to some very fine expertise.

One of the great advantages of being a world-famous personality is that you have no trouble finding the best people to help you when you venture into a new field. All in all, I found this exhibition a delightful surprise, very entertaining and satisfying. I’m only sorry that I didn’t manage to see it sooner. 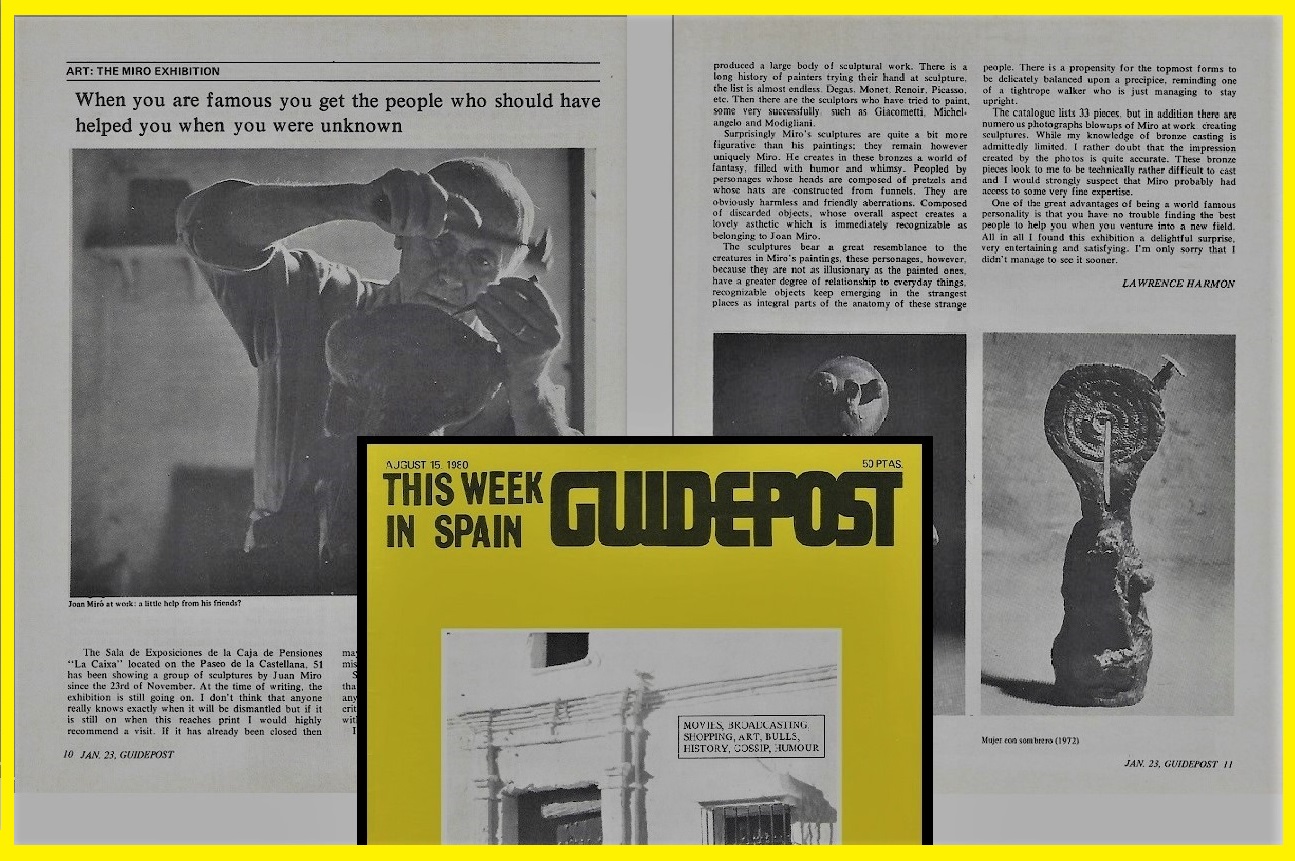 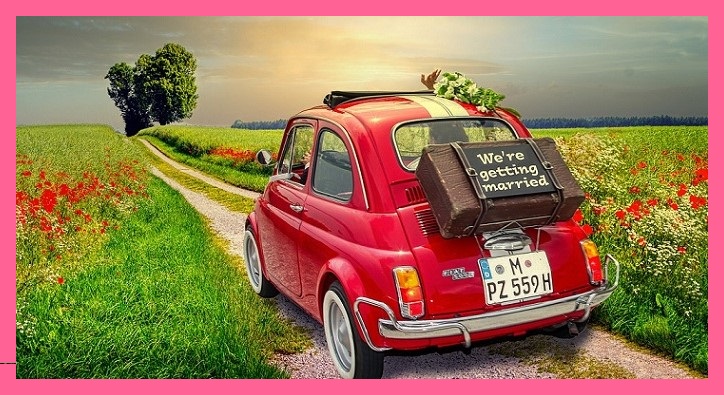 Next article THE CHILDLIKE MAGIC OF JOAN MIRÓ »