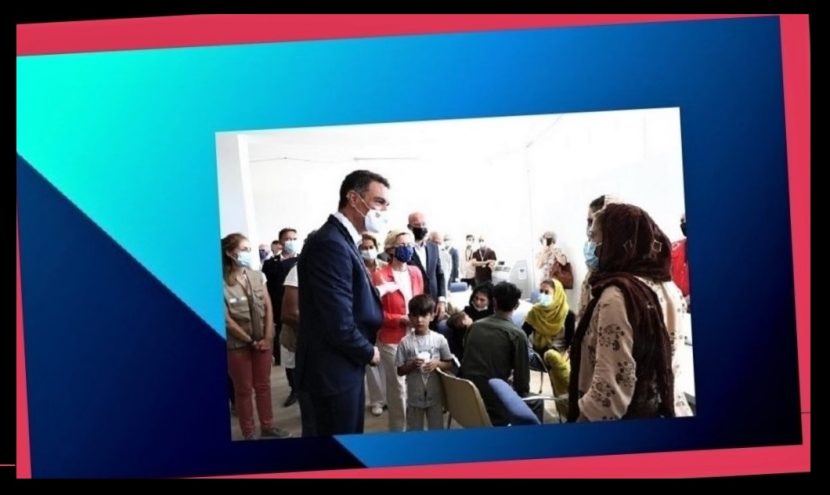 Spanish Prime Minister Pedro Sanchez talks with the first batch of Afghan evacuees at
Torrejon Air Base, hub of EU evacuation after the fall of Afghanistan. Looking
on, to his left, the Presidents of the Commission and the European
Council, Ursula von der Leyen and Charles Michel respectively 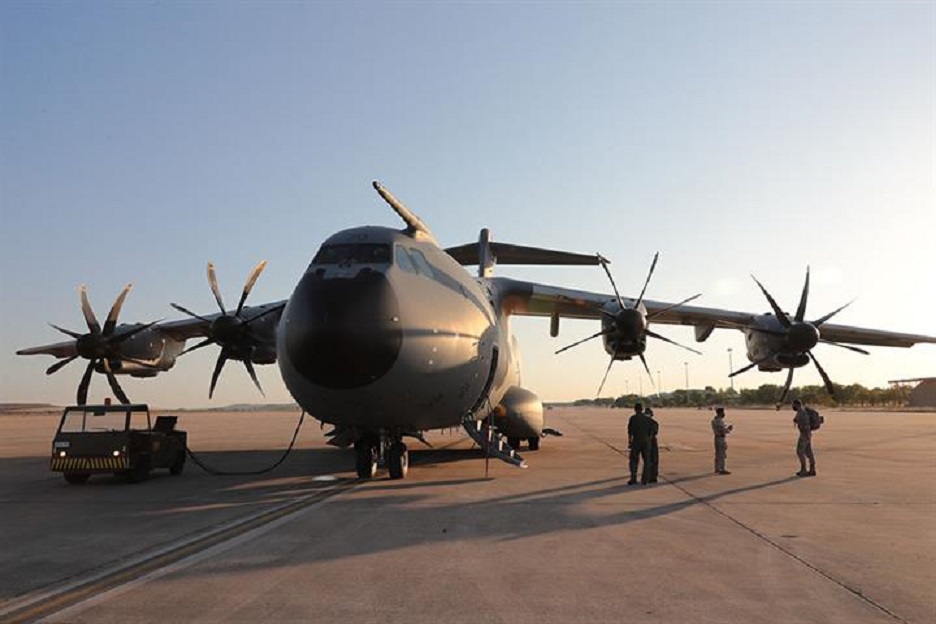 A-400M Spanish Air Force plane all geared up for its solidarity mission, 18 August 2021

A speedy and generous offer made by the government of Prime Minister Pedro Sanchez to receive Afghans who have worked with the European Union and their families seeking asylum in EU countries has made Madrid the hub of evacuation for these harried people. As the Spanish  Minister of Foreign Affairs had announced shortly before the operation began, “We have to continue working to evacuate the Afghans who have collaborated with Spain in the shortest possible time, and to guarantee the safety of all of them, as well as those who have worked with the EU and whose hub will be Madrid.” He pointed out that “Spain has provided all the necessary means” for the operation, and “we will not give up”. 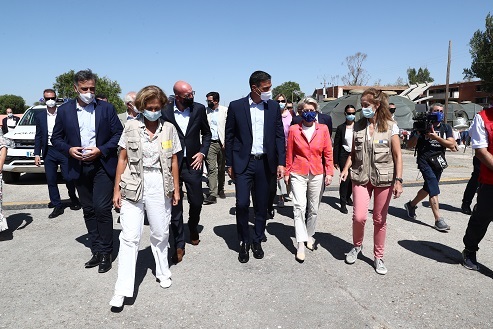 Pedro Sanchez, flanked by Charles Michel and Ursula von der Leyen on arriving at Torrejon Air Base to visit the facilities for Afghan evacuees and meet the first of them, 21 August 2021

Thus, an A440M Spanish Air Force transport plane with 48 Afghan evacuees on board, and another plane, chartered by the European Union, carrying 36 others, landed at dawn at the Torrejon Air Base on Thursday, 19 August 2021. Twelve of these refugees have already chosen to stay on; the others will be flown from Torrejon to other EU countries — Denmark, Germany, Poland and Lithuania — that have indicated their willingness to take them in. The EU will foot the bill of the entire operation. 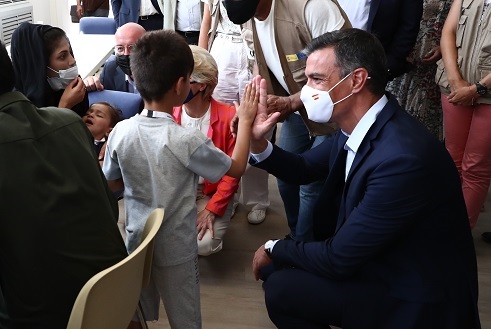 High five: The Spanish Prime Minister plays with a kid to assure him he’s in safe hands. The Presidents of the Commission and the European Council talk with an Afghan mother.

On their first day in Madrid, the Afghans were welcome to the transit facilities set up at the end of the runway in the Torrejon Air Base with a capacity for 800 people. There are separate areas for men, women and children, a dining room for 200 people, toilets and showers, children’s recreation area, a medical center staffed by medical personnel and psychologists, as well as translators.

Incidentally, none of the evacuees tested COVID-19 positive.

Since those first arrivals, Spain, working with the EU, continues flying in more evacuees.

Statement by the European Commission President Ursula von der Leyen at the joint press
conference with President of the European Council Charles Michel and Spanish
Prime Minister Pedro Sánchez during their visit to the EU hub
for evacuated Afghans at Torrejón Air Base, Madrid
(Boldface type supplied) 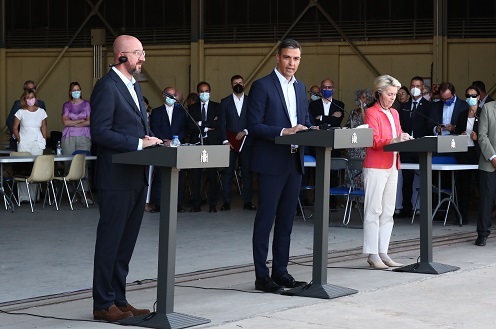 President of the Council, dear Charles,

I first of all also want to thank you from the bottom of my heart, dear Pedro, for inviting us to the reception hub here. . . [and]. . . for having taken the initiative [along with]. . .High Representative, Josep Borrell [and]. . . the respective Minister for Foreign Affairs and Development [of EU Member States], to coordinate the reception of incoming Afghans here, who have worked for the European Union, and to coordinate their arrival here with their families. 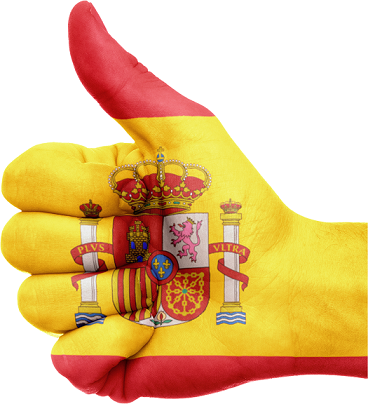 In times of need you can count on Spain’s humanity

Indeed, as you said Pedro, . . . in times of need, Spain has shown humanity and Spain has proven a great sense of solidarity. So Spain is here an example for the European soul at its best. . .

I also want to thank the [EU] Member States, who are taking in our colleagues from Afghanistan and their families. This whole event we are living through now is a tragedy for Afghanistan and it is a severe blow for the international community. And the more important it is that even as the crisis engulfs Kabul, we step up as Europeans. . .to expand all the efforts of help that are necessary.

We need to help, it is our moral responsibility, and not only to help the Afghans arriving here in Spain, but also those who have remained in Afghanistan. . . The European Union is firmly committed to continue supporting the NGOs operating in the country. Humanitarian needs are increasing with the latest development. . .The number of internally displaced people. . . is 3.7 million people almost. . .We must help ensure that displaced Afghans can safely return to their homes, or have at least a perspective, whether they are currently in Afghanistan or in the neighbouring countries. And for that purpose, the Commission is currently working on increasing its current humanitarian aid. We had planned an envelope of €57 million for 2021, but we have to increase that. . .

. . .We need to prevent people from falling into the hands of smugglers and human traffickers. These human traffickers put Afghans, who right now try to flee the conflict, in at least as much danger. . . We must offer legal and safe routes globally, organised by us, the international community, to those who need protection. And for this to be effective, we must act together on a global level. . . This resettlement of vulnerable people is of utmost importance, it is our moral duty.

We need to think about those in imminent danger in Afghanistan, such as journalists or human rights defenders, and especially women and girls.

You are so right, Pedro, it was not in vain. [Because of our presence in Afghanistan] there are, for 20 years, generations who were able to attend schools, who were able to study, who acquired education, who are the ones from whom you never ever can take that away anymore, the possibility to decide for your own life. [But] we have to support [them still]. They are at high risk of losing all their rights in the country. So here, I also call on all States who have participated in the Afghanistan mission – Europeans and others – to provide sufficient resettlement quotas and secure pathways, so that collectively we can accommodate those in need of protection. The Commission stands ready to look into the necessary budgetary means to support EU Member States who will step up and help resettle refugees.

. .  .The situation is still very unclear and very unpredictable [inside Afghanistan]. We see the Taliban taking the reins of the country. We hear of discussions to form a government that is inclusive. We hear Taliban statements that stress that women will have their rightful place in society, and be able to study and work, within the framework of Islam – whatever that means. But we also hear more and more reports of people being hunted down for their past work or their opinions. And we hear of women being turned away when they show up at their usual workplace.

So let me be very clear on development aid. The €1 billion in EU funds set aside for development aid for the next seven years is tied to strict conditions: respect for human rights, good treatment of minorities, and respect for the rights of women and girls, just to name a few. And not a single euro of development aid can go to a regime that denies women and girls their full freedoms and rights to education and careers. We may well hear the Taliban’s words, but we will measure them above all by their deeds and their actions.

On the second day of the Taliban’s rule in Kabul, the front of Hamid Karzai International Airport was crowded with people trying to travel abroad, but were stopped by Taliban militants. 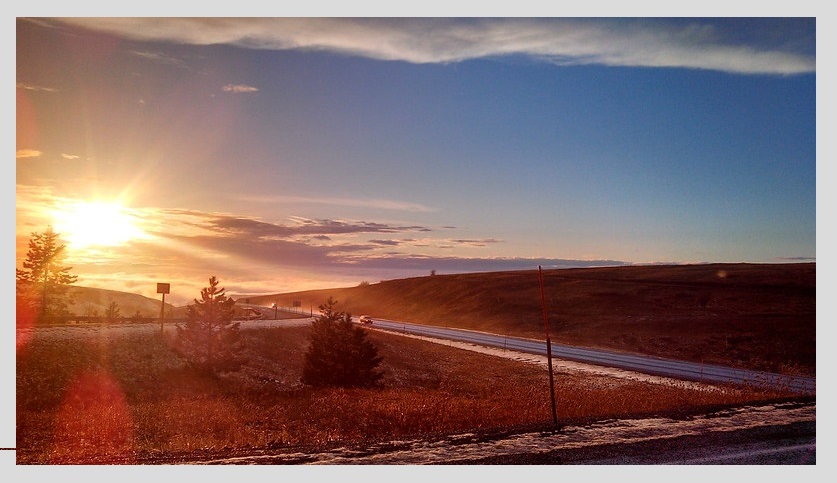 Next article A Second Opinion: Getting Back Online »