A GUIDEPOST REPRINT: “The Semana Grande of Saint Jean-de-Luz,” 26 September 1969 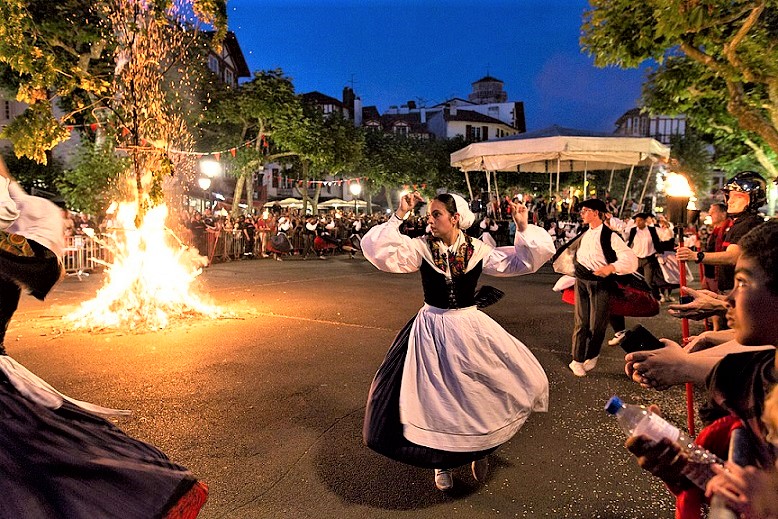 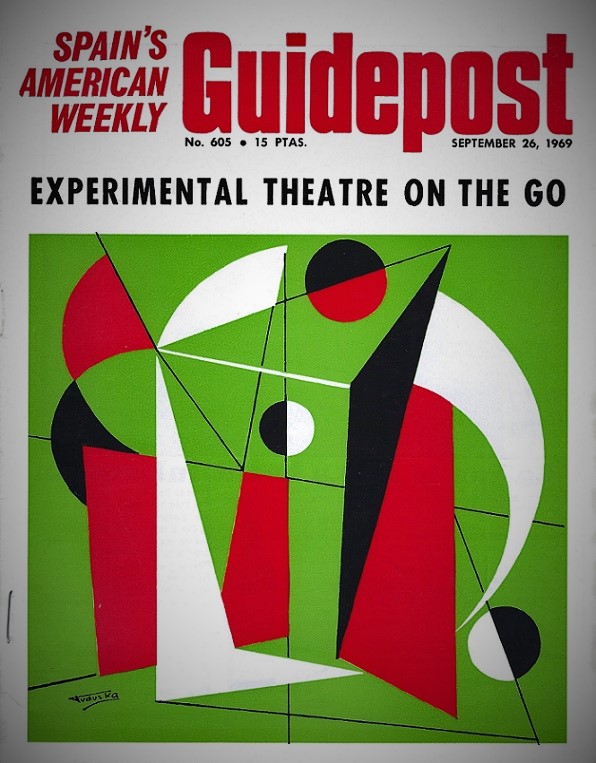 A “Semana Grande” in Saint Jean-de-Luz? In France? Mais oui! And more than a simple highlighting of a summer or vacation season, the festival of Saint Jean-de-Luz has a cultural purpose which transcends that of most Spanish cities on which it has more or less modeled its activities. Nor has it set out to rival or compete with any of its tras los montes sisters. For Saint Jean-de-Luz, only a dozen odd kilometers from the Spanish-French frontier, is in the Pays Basque, in the Basque province of Labourd, and feels an infinitely closer attachment to Spain than it does to France. 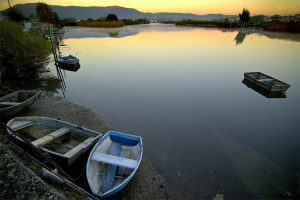 Rio Bidasoa, the small river that divides France and Spain in the Basque Country. Photo: Bidasoa on the Spanish side (Irun, Gipuzkoa)

It was primarily in order to stress the links all Basques in the three Basque provinces located in France have toward Spain that the municipality of Saint Jean-de-Luz, under the leadership of its erudite mayor, Monsieur Pierre Larramendy, chose to commemorate Spain this year. For the tenth anniversary of the “Grande Semaine” festival, it was unanimously agreed that Spain should be honored; but Spain has been on the lips of every Luzien ever since the first festival, which featured French-Spanish relations, was held. . . One really would not be presuming too much to say that in future years also, though it is the intention of Saint Jean-de-Luz to commemorate eventually each country of Europe. . .  The Bidasoa, that thin and shallow mountain stream. . .which separates France and Spain does not separate the Basques. It is the aim or, if you will, the dream of the people of Saint Jean-de-Luz to demonstrate with its week of superb cultural activities that every frontier is in reality as peaceful as the Bidasoa and no more divides nations than it does the Basques. 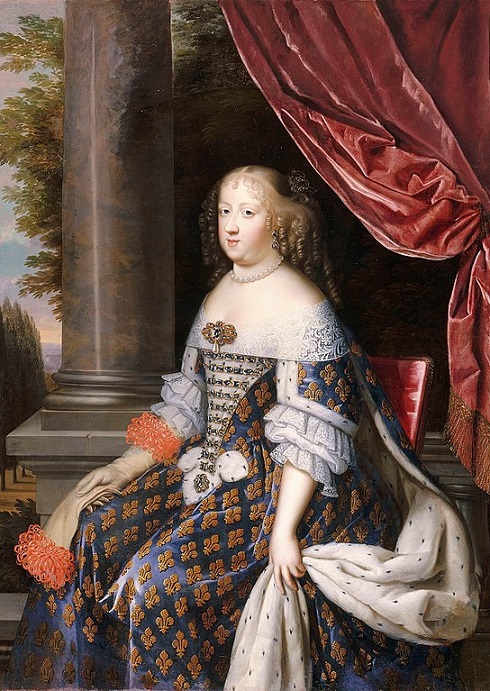 The first “Semana Grande” of Saint Jean-de-Luz was organized to honor the three hundredth anniversary of the marriage of Louis XIV of France and the Spanish Infante, Marie-Thérèse. So successful was this festival and appetite so whetted concerning life and customs in the two countries during the XVIIth century, that the festival for the following year was dedicated to recreate the atmosphere of the XVIth century. The XVIIIth century received its due next, and the romantic period of the XIXth century. . .

England, Greece, Italy, Austria, even the Atlantic Ocean that sends its breakers thudding into the Cantabrian coast, have received their accolades in these past few years. Outstanding as each of these festivals has been, none was launched on a scale as ambitious as the one this September for Spain. . . From the very opening night a standard of artistic excellence was set that was successfully passed on and maintained until the lights in the Théâtre du Festival closed upon the performance of Henry de Montherlant´s play, “Le Cardinal d’Espagne”. . . Something akin to a spirit of genius, animated each of the activities given. We may call this . . . the Festival Spirit. We may also call it the Spirit of Spain, of that Spain which created an age of Art which historians call and will always call Golden. 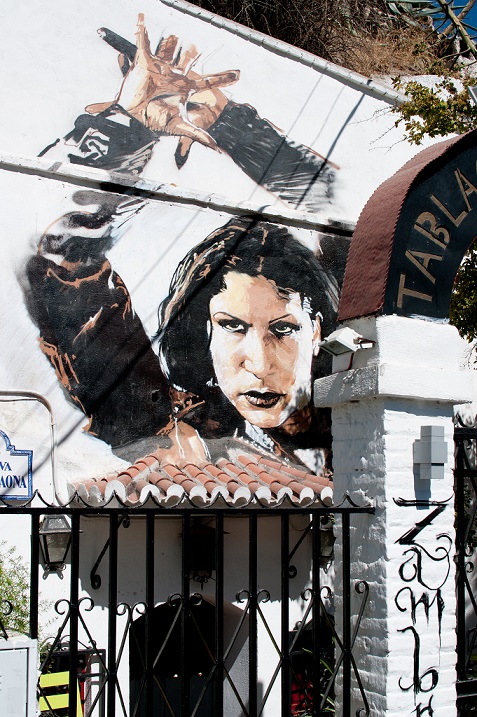 The festival commenced on September 3rd [1969], a Wednesday, and featured the Spanish ballet company Antonio [Gades]. The expert choreography, the dazzling costumes. . .and the scintillating music of the National Orchestra of Madrid. . .created a carnival atmosphere of such animation that one felt it was not a staged spectacle. . .but a street scene in Andalucía. The show was, in fact, called “An Evening in Granada”. Divided into three parts, it began on a classical note with numbers called “Alegro de concierto”, music by Granados, and “Almería”, music composed by Albéniz. Then a number called “Romerías”, which was followed by a racy jota, “Viva Navarra”.

The second part was devoted to a lovely and charming ballet entitled “Eterna Castilla”. . . The most remarkable aspect of this exquisite ballet, considered the finest in the repertoire of Spanish ballet, was its strong evocation of Goya´s Spain. Dances and costumes, music and singing blended so harmoniously that the poetic tone of a vanished era was recaptured. It was ballet at its best and, most extraordinary of all, art in its purest expression.

The third and final part, “La Taberna del Toro”, in which Antonio and his entire company of sixty dancers and singers participated, produced an effect that is even more unusual. . . One saw and heard dancers and singers seized with the desire to outperform what had already been performed to perfection in the earlier numbers. So taken were they by this wish to surpass themselves, that long after the audience had left the theatre, the dressing rooms behind the stage resounded with the clicking of feet, clapping of hands and strumming of guitars. “Eternal Spain,” a visitor remarked. Or is it not rather the uncontainable need of artists to create something that is at the same time both a polished work of art and a spontaneous manifestation of life during its most exhilarating moments? . . .The ballet company of Antonio has certainly left indelible impressions upon the approximately two thousand spectators who jammed the Théâtre du Festival. 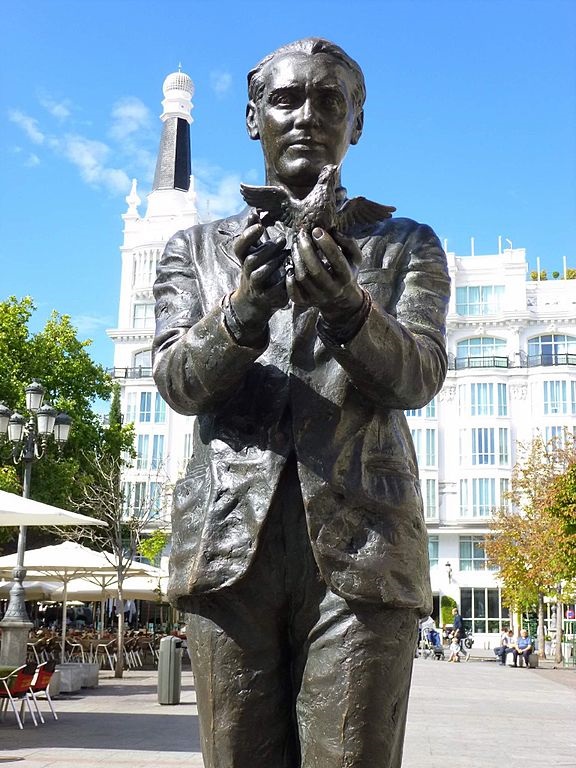 The following evening, in another theater, the eminent French actor Pierre Fresnay gave a poetry reading. . . Oscar Ghiglia accompanied him on his guitar. It was Señor Ghiglia who opened the program with guitar numbers composed by Alonso Mudarra and Granados. This accomplished young guitarist, who is a pupil of Andrés Segovia and has given concerts throughout Europe and the United States, set an “Iberic” tone for such poetry recitations as Federico García Lorca´s “Fantaisie Symbolique” and “Funeral Song”, Unamuno´s “Castile”, Antonio Machado´s “La Noria” and Alemán´s “Lázaro de Tormes”. Pierre Fresnay also read poems by several French poets who have either lived long periods in Spain or written extensively about it. . .

For the third evening, Victoria de los Angeles was to have appeared; illness obliged her to cancel the engagement, and it was the young French pianist Philippe Entremont who substituted for her. Playing works by Johann Sebastián Bach, Muños Molleda, Guridi and Beethoven´s Fourth Piano Concerto, Entremont was, in a sense, the great surprise of the “Semana Grande”. Not only was his playing poignant, but it added an aspect of grandeur that was fully in accord with the festival´s theme of Spain. . . 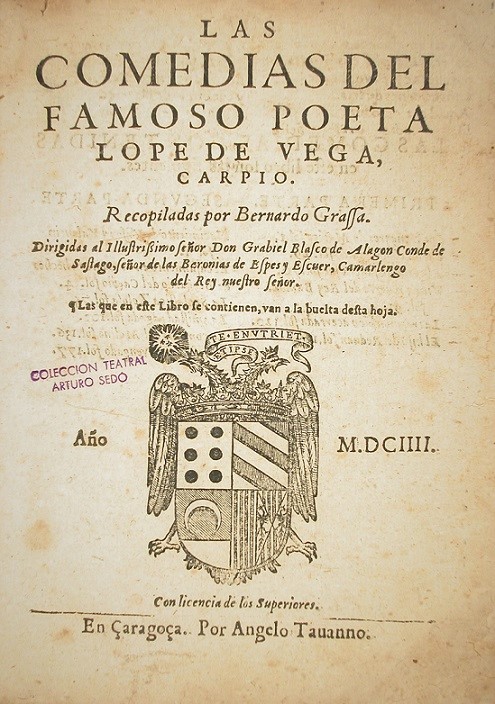 The fourth evening and the mid-point of the festival programs was devoted to a play by the world´s most prodigious playwright, Lope de Vega. It was his “El Acero de Madrid”. . .that was given. . . “El Acero de Madrid” is considered by most authorities as the masterpiece of Lope de Vega, who wrote approximately 2,200 plays, some seven hundred of which have survived to our day. A “cape and sword” comedy, it is, despite its length, one of the most beautifully constructed plays in the repertoire of the world´s literature; and the performance of it given on the stage at the Théâtre du Festival in Saint Jean-de-Luz was impeccable. . . Plays such as Lope de Vega´s “El Acero de Madrid” make one regret that Spanish plays are not performed more often on European and American stages.

The fifth day of the program was dedicated to fandango dances at the Théâtre de la Nature as well as to a ballet by the troupe of Rafael Aguilar. In addition, later that evening street dances and singing were held on Place Louis XIV. We must not omit to mention “La Messe des Corsaires” which was held in the morning at the church of Saint Jean-Baptiste. The program for the day, though intended to appeal to a vaster audience of visitors, recreated in its own way what one normally experiences at a typical Spanish festival in Spain.

Arthur Rubinstein was the focus of interest the evening of the sixth day. Introducing an international note with works by such composers as Chopin, Debussy and Chabrier, it was Rubinstein´s playing of several numbers by Manuel De Falla which not only fulfilled the festival purpose of the program, but also highlighted his own incredible versatility at the piano. He would be playing in Saint Jean-de-Luz still if he continued to appear to take his bows to the thunderous applause that erupted after playing his final scheduled work. . . 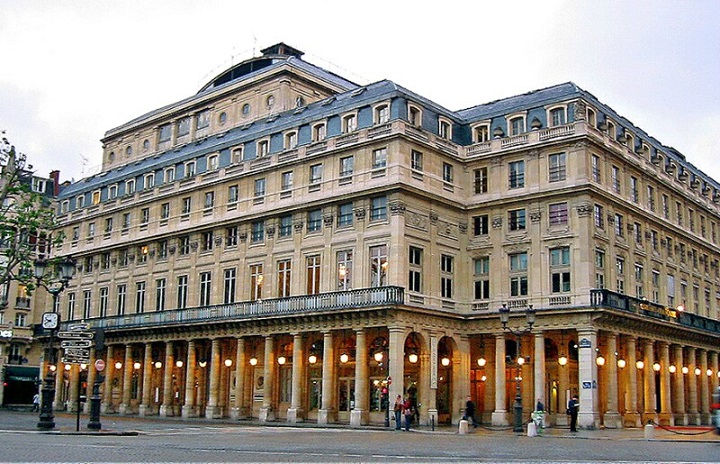 Eminent actors of Comédie-Francaise acted in “Cardinal d’Espagne”. Photo: the theater in Paris

A somber, moody and dramatically stirring “Cardinal d’Espagne” terminated the program of the tenth anniversary of Saint Jean-de-Luz’s “Semana Grande”. Admirably performed by such Comédie Française actors as Denise Noël, Michel Etcheverry (in the principal role of Cardinal Cisneros) and André Falcon, this play appears to have an understanding of the Spanish character to which very few non-Spanish authors ever arrive. It also emphasizes the tremendous influence that Spanish literature has always had upon the French. Michel Etcheverry´s interpretation of the role of Cardinal Cisneros was flawless and moving; it is a role which demands the maximum of effort and dedication of any actor who undertakes to play it. Special acclaim, however, must be given to Denise Noël, who played the role of Juana la Loca. Difficult as it is to play effectively the role of Cardinal Cisneros, it is even of more importance that Juana la Loca´s role be assigned to an actress capable of giving the necessary ripostes to Cardinal Cisneros’ exigencies. For it is Juana la Loca, after all, who makes Cardinal Cisneros human for us. This work by Henry de Montherlant, one of his noblest, merits, as does “El Acero de Madrid” of Lope de Vega, more frequent representation on contemporary stages. 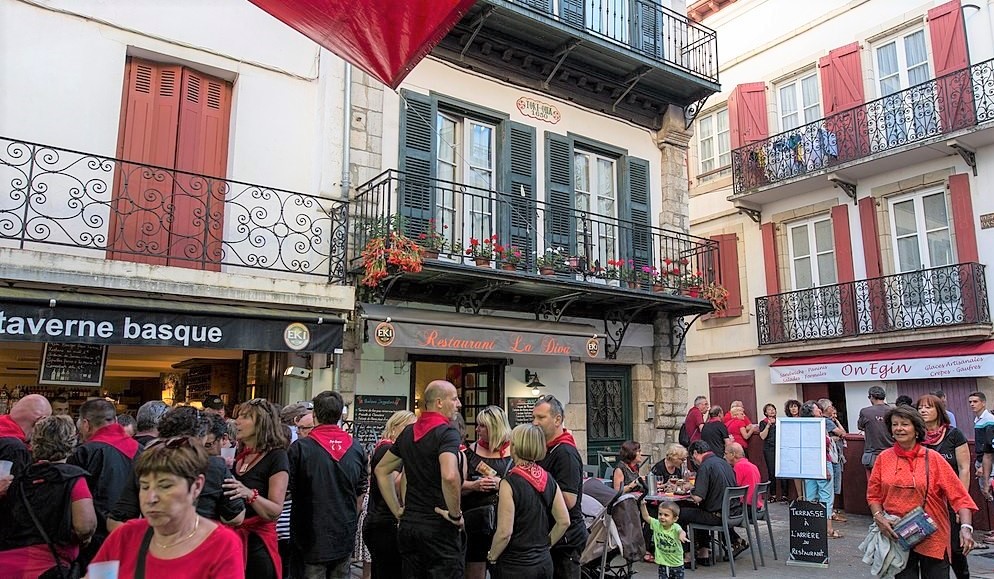 Saint-Jean-de-Luz: its Spanishness is more than palpable

It is Poland that will be commemorated for the eleventh festival season of Saint Jean-de-Luz in 1970. Judging from the fiesta programs given by Saint Jean-de-Luz in former years, one can safely assume that Spain and Spanish artists will participate significantly in one manner or another. The very proximity of Saint Jean-de-Luz to Spain makes this almost certain. “La Grande Semaine” is, after all, a permanent inspiration of the various “Semana Grande” given in Spain. 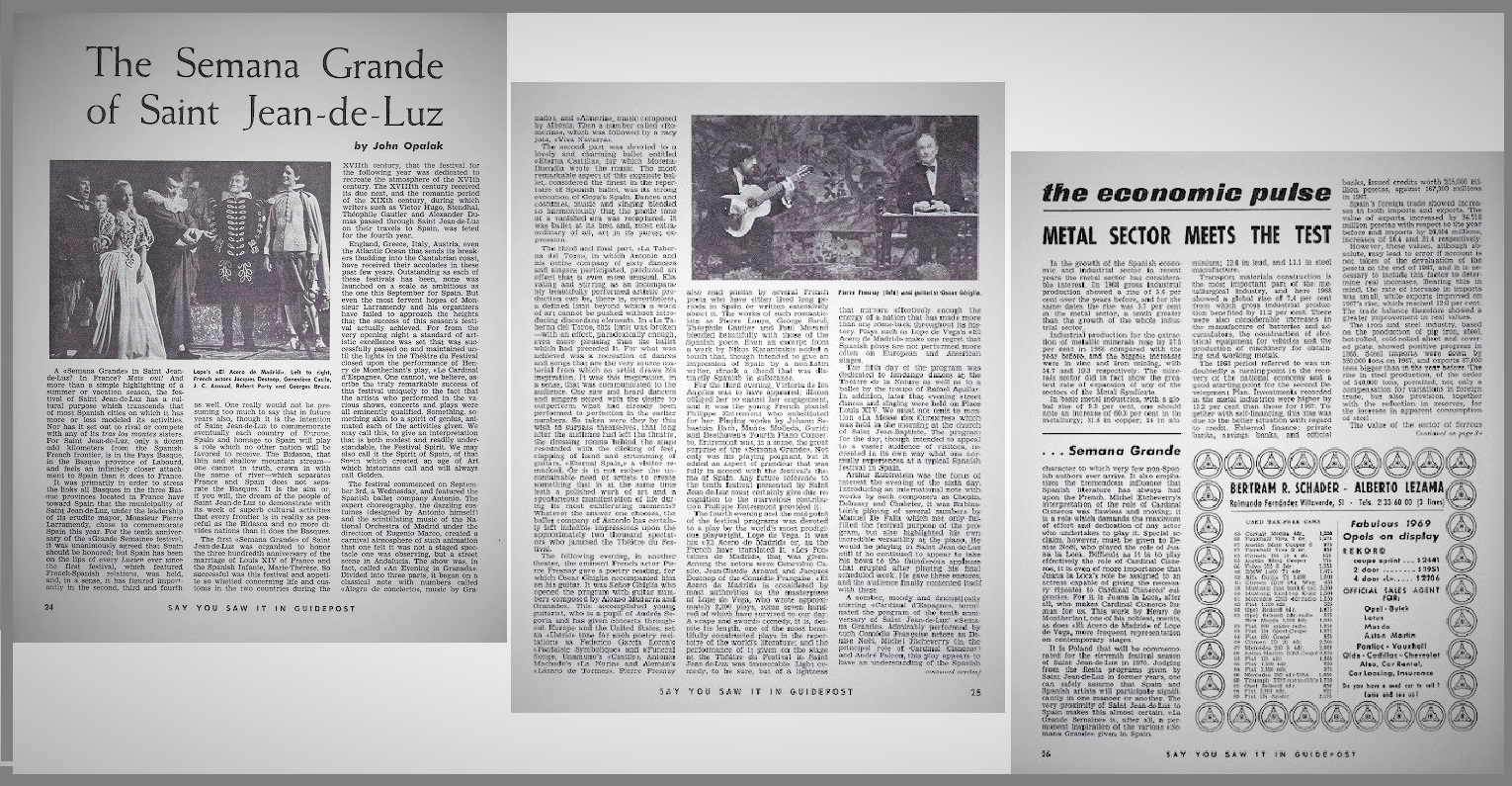 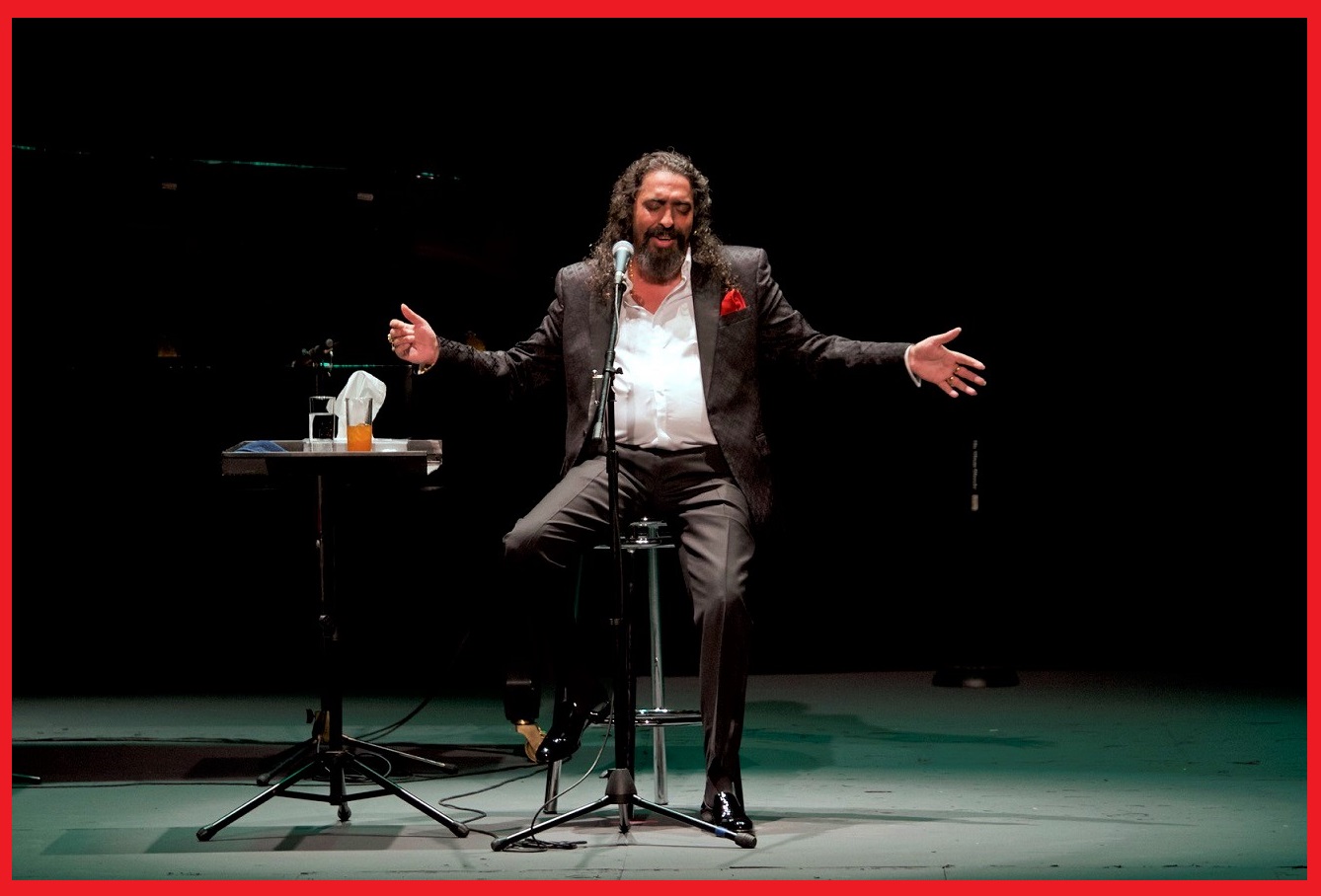 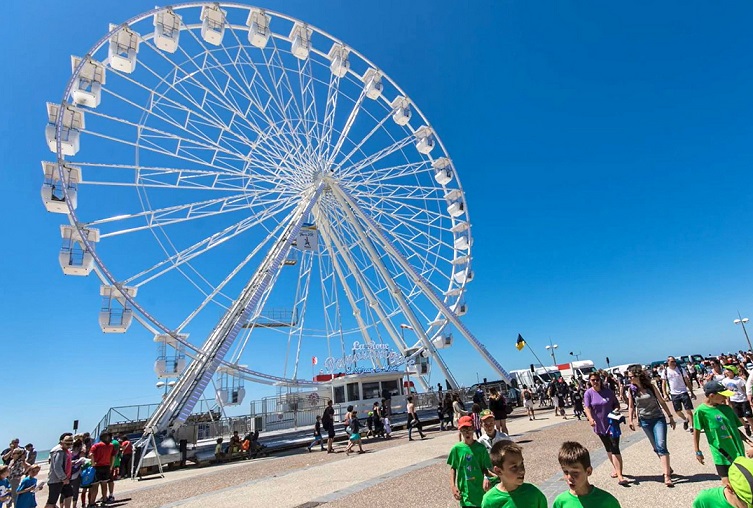