A GUIDEPOST REPRINT: “THE FIRST LADIES OF MADRID (or A Tale of three or more Virgins)”, 30 MARCH 1990 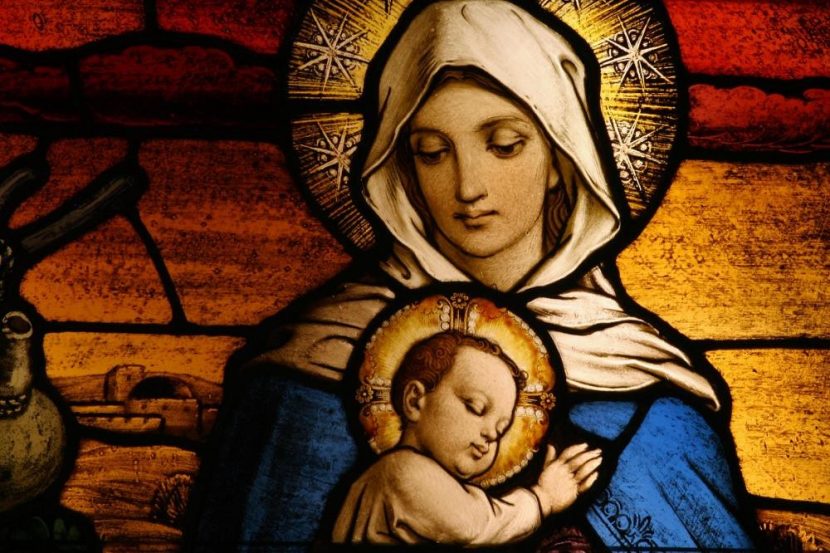 When Alfonso VI entered Madrid in1803, he was in too much of a hurry to savor his conquest. Toledo was his principal objective. However, when he returned to Madrid two years later with the imperial city well Christianized, tradition says that the energetically dedicated himself to its reconstruction while piety motivated him to search for the vanished Virgin that was known to be somewhere in the city. He found it upon demolishing one of the circular towers of the wall of a fortification near what was the market, or corn exchange (“almudin”), which is what probably gave its name to the image. 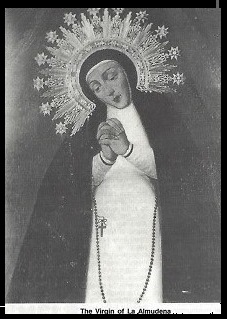 Or, so tradition says. The truth is we only know that Almudena appeared in the wall, but not because anyone was looking for it, as no one knew of its existence. Moreover, the present sculpture of the Almudena is not even the original one, but dates from the XVI century. As a result of the curious habits of past generations, no one knows what happened to the original. It was custom to replace a statue when it was deemed antiquated, out of style, too simple, or “poor”, while it continued with the same name, although having nothing to do with the former image.

This Almudena has passed the test of time. During the Civil War it was stored in the crypt of the Cathedral when the building was converted into a military barracks. When it was found at the end of the conflict, it had a cord around its neck from which hung a sign saying, “Respect her.” 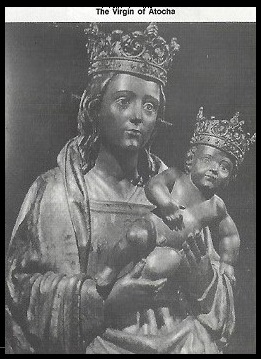 What Alfonso VI, or whoever arrived in Madrid, knew was that a very ancient image existed, which had conserved its cult under Arab domination. San Ildefonso of Toledo wrote to a canon of Zaragoza about it, saying that when he passed through Madrid he shouldn’t forget to pray before a Virgin in an “atochar”, a recipient for or place of esparto grass (pressed esparto is used for soles of alpargatas, or espadrilles). The Virgin of Atocha is the oldest figure of Madrid, and it is most likely that its worship goes back to the early days of Christianity in the center of Spain. For centuries the people and monarchs alike – including Isabel II – used to pray the Salve, or prayer to the Holy Virgin, before her every Sunday. 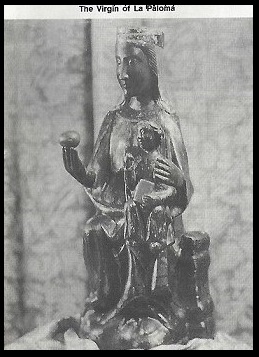 The Virgin of the Paloma is a relative newcomer to the patron saint club. She only dates back to 1787, when a woman named Isabel Tintero saw some young people carrying canvas of the Virgin of the Soledad, and she had to have it. She did, put it in her doorway and propagated its devotion to such an extent that by the end of the century it had its own shrine, with the enthusiastic support of the rector of San Andres, and the devotion of the population of Madrid, which continues to worship its image in the Church of Nuestra Señora de la Soledad, near the Puerta de Toledo in the calle de la Paloma.

So who is the Real “Patrona” of Madrid?

So who is the real patrona of Madrid? The conciliatory madrileños will tell you that it is obvious: All three. It is said that Atocha is the Patron of the Court, Almudena of the Town, and Paloma of the People. Moreover, Almudena gives us an official holiday on November 9; Paloma shares her name with thousands of girls and her day on August 15 with the Assumption; and the name Atocha, which used to be an agricultural area filled with esparto, has been relegated to a very busy thourough fare and train station.

But Madrid does not lack for other Virgins and devotees. Some other famous ones include:

– The Madonna of Madrid: rarely seen, in the convent of the Dominicas of Claudio Coello, 112. 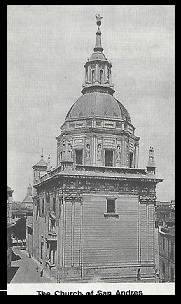 The Church of San Andres

– The Virgin of Valverde: found in the Sanctuary which bears its name, in the Colmenar Road, Fuencarral.

– The Virgin of Constantinopla: robbed a few days after Madrid was liberated, a copy is in the Clarisas of General Ricardos, 107

– The Virgin of the Puerto: its hermitage is one of the most popular. It is housed near the river, next to the Puente de Segovia. In May, madrileños come out in droves to pray before her image.

– Virgin of the Maravillas: destroyed during the Civil War, it gave its name to the barrio of Maravillas, from which it was expelled with the break up of the cloisters. A copy is preserved in the Carmelites of Principe de Vergara.

– The Virgin de la Flor de Lis: an ancient image, in the crypt of the Cathedral, found behind the altar piece of Santa Maria, which was the first parish in the city.

– The Virgin of the Peligros: in the Convent of the Bernardas.

– The Virgin of the Buen Suceso: in Martin de los Heros Street.

– The Virgin of Buen Consejo: in the parish of the present Cathedral. Many saints, including Luis Gonzaga, found inspiration before her. 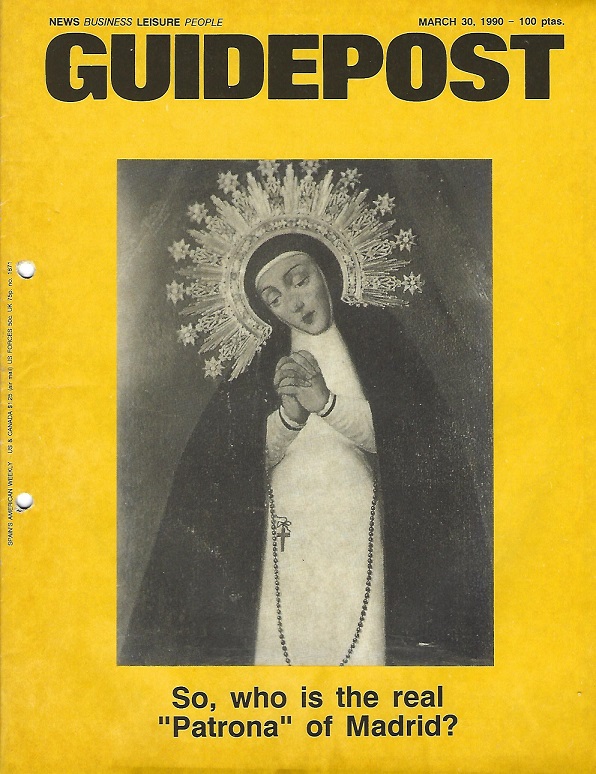 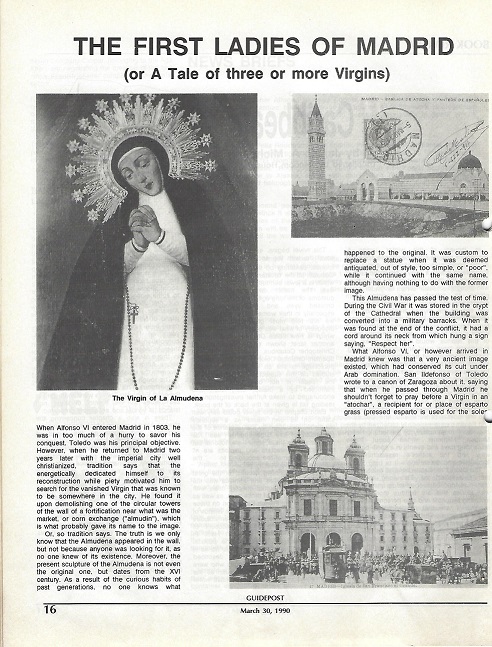 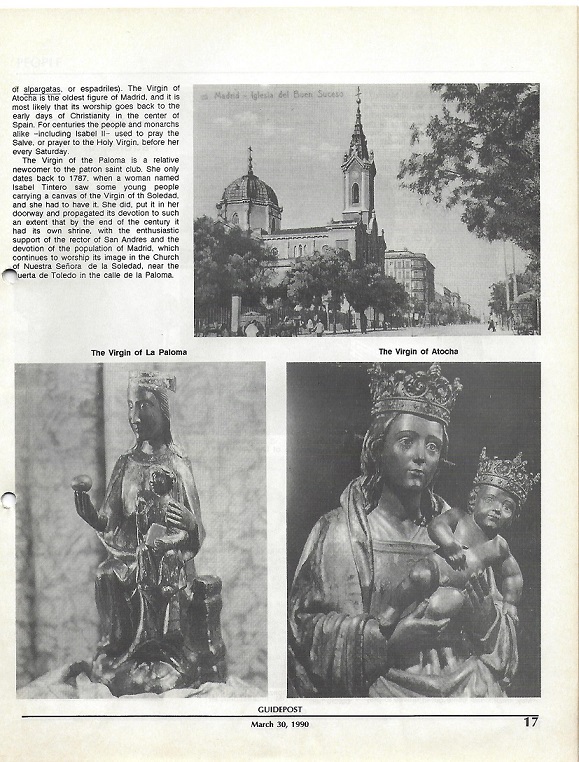 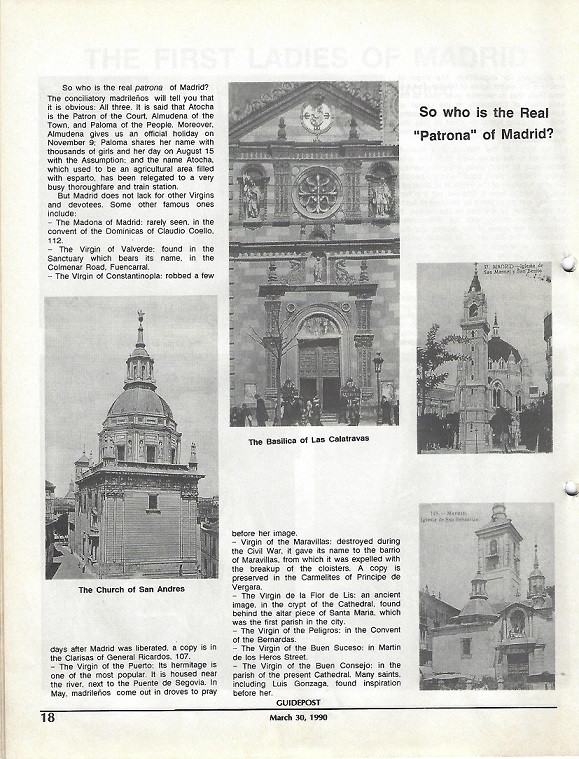 Previous article « THE GIRALDA WAVED TO ME 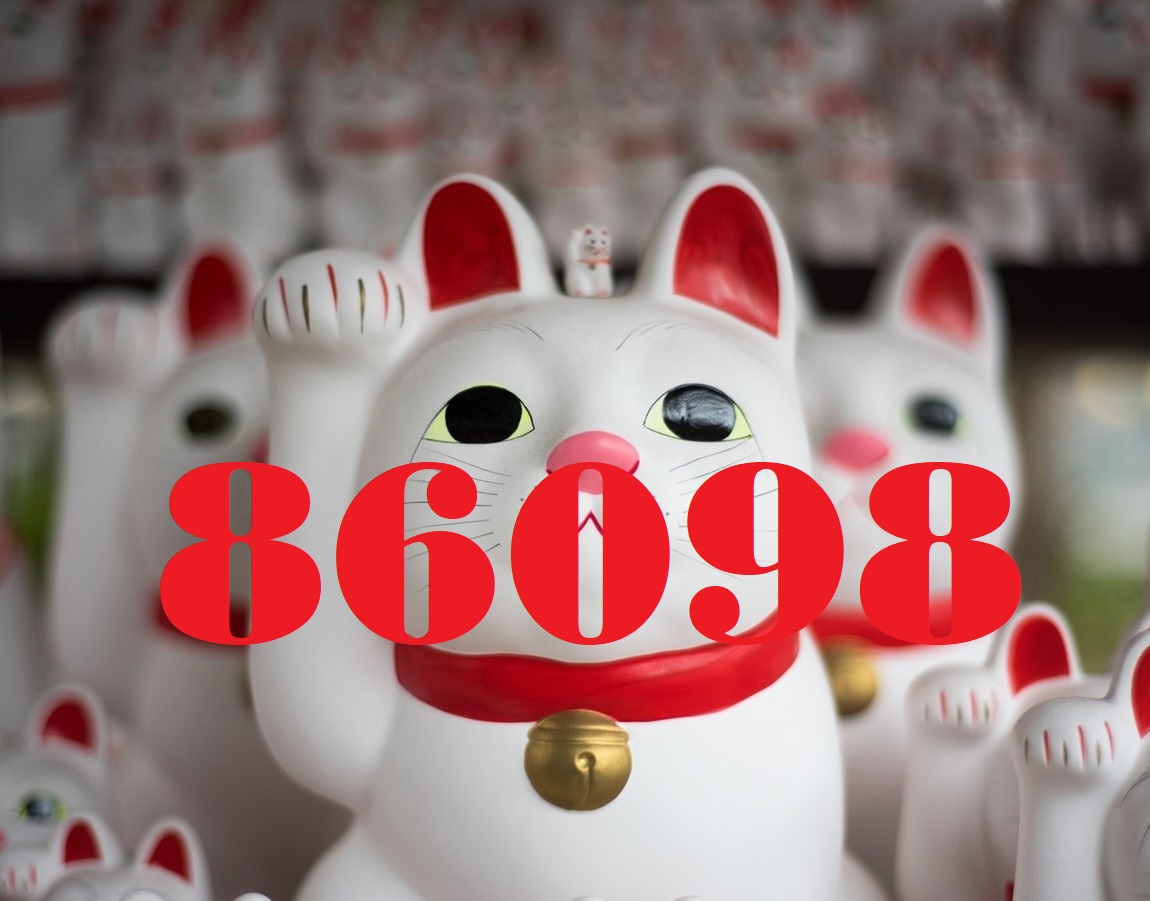 Next article SOOTHSAYER PREDICTS THE FIRST PRIZE OF THE SPECIAL CHRISTMAS LOTTERY IN SPAIN IS 86098! »