A GUIDEPOST REPRINT: “THE ARAB RENAISSANCE, Fact or Fiction?”, 12 JANUARY 1990

Detail of an arch in the Great Mosque of Cordoba, Spain. Groundbreaking: 784 AD. “During the Dark Ages
in Western Europe, the Arabs and the Moslems were at the peak of their bright
civilization. The cities  of Baghdad, Damascus, Cairo, in the eastern
Arab world, and the Arab cities of Seville, Cordoba,  and
Granada  in Spain were great centers
of culture and civilization.”

To understand the Arab world and, indeed, the Afro-Asians, we have to put in perspective comparable things. Modern Western civilization is some 500 years old, going back to the Renaissance in Western Europe. Prior to that there were some one thousand years of Dark Ages, Middle Ages or medieval period, stretching to the fall ofRome. The fall of Rome was the end of the creative early era of western civilization,
namely of the classical antiquities of the Greeks and the Romans.

During the Dark Ages in Western Europe, the Arabs and the Moslems were at the peak of their bright civilization. The cities of Baghdad, Damascus, Cairo, in the eastern Arab world, and the Arab cities of Seville, Cordoba, and Granada in Spain were great centers of culture and civilization. Students from various parts of the world went to those cities in the pursuit of knowledge much as students today from various parts of the world attend the great universities in Europe and North America. 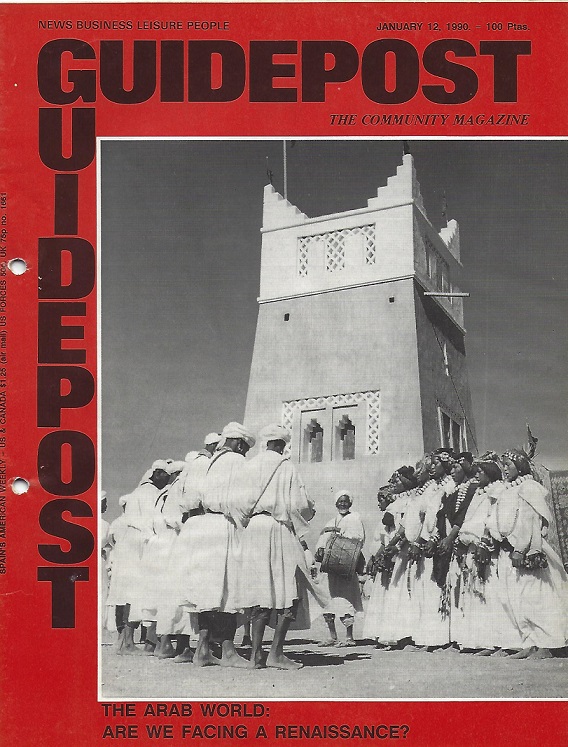 The Arabic contribution to the English-speaking people in the field of language was significant. . . At least four out of each 100 words of the English language have Arabic roots. . . Without Arab science, modern Western civilization would be behind some 200 to 300 years, according to one historian[.  . .]

In his introduction to the History of Science, Professor George Sarton of Harvard wrote concerning the significance of Arab contribution to the west as follows: “From the second half of the eighth to the end of the eleventh century, Arabic was the scientific, the progressive language of mankind… When the West was sufficiently mature to feel the need of deeper knowledge, it turned its attention first of all, not to the  Greek sources, but to the Arabic ones.” 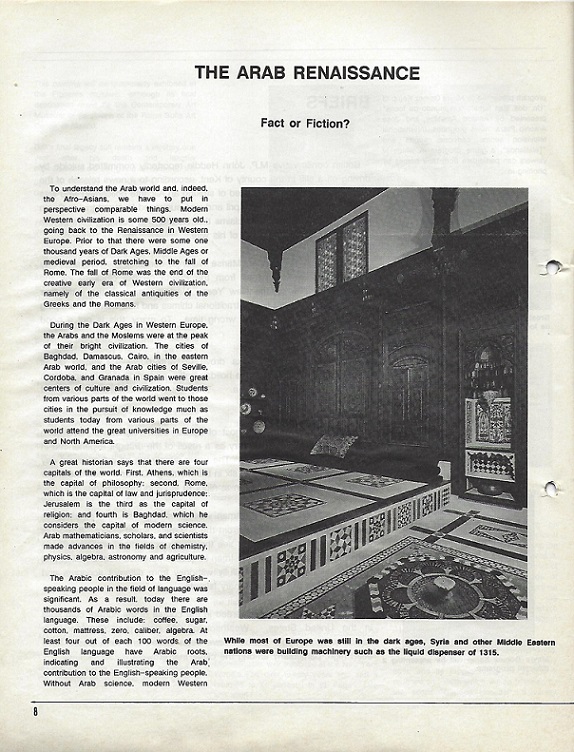 After their creative era, the Arabs and the Moslems went into their own period of Dark Ages [, . . .] a period of decay and decline for some 500 or 600 years. Modern Arab history begins with World War I, whereas modern Western history begins in the fourteenth century, with the beginning of the Renaissance in Western Europe.

Of course, it is not possible for the Arabs and the Afro-Asian people, whose modern history begins with World War I (the modern history of the people of Africa begins with World War II), to obtain in a short period of forty, fifty or sixty years what has been obtained in the West over the last 400, 500 or 600 years. . . Today in the West there is freedom of speech, press, assembly, the concept of separation between religion and state, majority rule and majority rights, etc., etc. These concepts did not develop overnight and they were indeed the result of revolutions and evolution, of civil wars and bloody revolutions. And, hence, if the Arabs today, and the Afro-Asians, are going through civil wars, revolutions, upheavals, efforts at unity and failures at establishing perfect unions, one should not be astonished; the West went through similar stages. 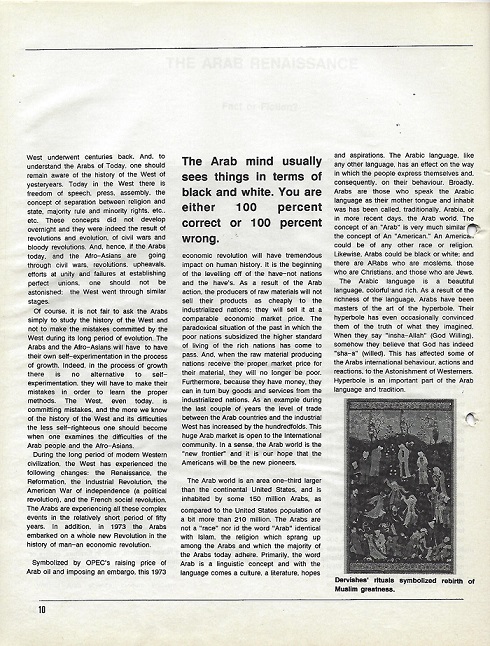 [. . .] During the long period of modern Western civilization, the West has experienced the following changes: the Renaissance, the Reformation, the Industrial Revolution, the American War of Independence (a political revolution), and the French social revolution. The Arabs are experiencing all these complex events in the relatively short period of fifty years. In addition, in 1973 the Arabs embarked on a whole new Revolution in the history of man – an economic revolution.

Symbolized by OPEC’s raising price of Arab oil and imposing an embargo, this 1973 economic revolution will have tremendous impact on human history.[*] It is the beginning of the levelling off the have-not nations and the have’s. As a result of the Arab action, the producers of raw materials will not sell their products as cheaply to the industrialized nations; they will sell it at a comparable economic market price. The
paradoxical situation of the past in which the poor nations subsidized the higher standard of living of the rich nations has come to pass. And, when the raw material producing nations receive the proper market price for their material, they will no longer be poor. Furthermore, because they have money, they can in turn buy goods and services from the industrialized nations[. . .] 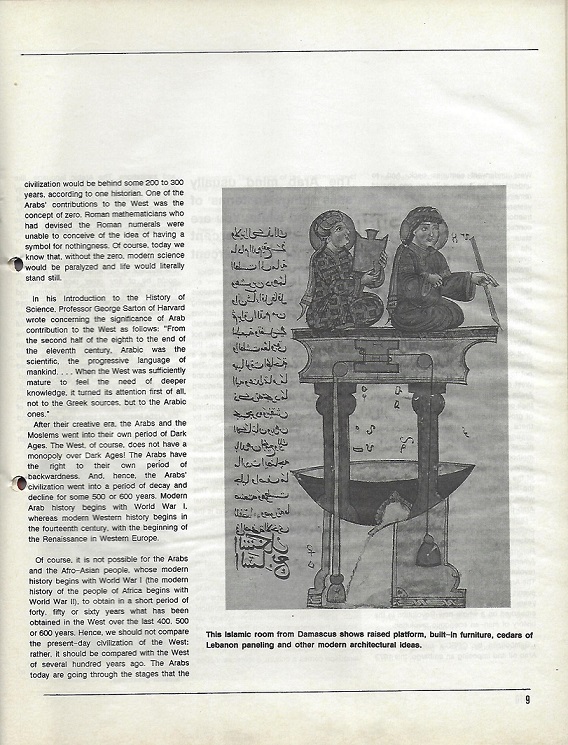 The Arab world is an area one-third larger than the continental United States, and is inhabited by some 150 million Arabs, as compared to the United States population of a bit more than 210 million. The Arabs are not a “race” nor is the word “Arab” identical with Islam, the religion which sprang up among the Arabs and to which the majority of the Arabs today adhere. Primarily, the word Arab is a linguistic concept and with the language comes a culture, a literature, hopes and aspirations. The Arabic language, like any other language, has an effect on the way in which the people express themselves and consequently, on their behaviour. Broadly, Arabs are those who speak the Arabic language as their mother tongue and inhabit what has been called, traditionally, Arabia, or in more recent days, the Arab world. The concept of an “Arab” is very much similar to the concept of an “American”. An American could be of any other race or religion[. . .]

The Arab human being is warm and exceedingly hospitable[. . .] Even when he has no food for himself and his family, he may do his utmost to provide the best of hospitality for the visitor. The harsh life of the desert and agrarian societies has made the individual Arab
learn to become contented with the minimum if that is all that is available. His hopes are for survival first, improving his conditions second, and excelling third[. . .] 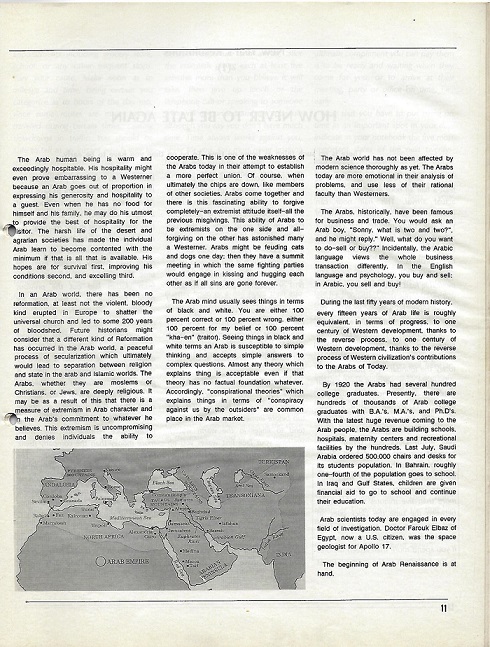 In an Arab world, there has been no reformation, at least not the violent, bloody kind that erupted in Europe to shatter the universal church and led to some 200 years of bloodshed. Future historians might consider that a different kind of Reformation has occurred in the Arab world, a peaceful process of secularization which ultimately would lead to separation between religion and state in the Arab and Islamic worlds. The Arabs, whether they are Moslems or Christians, or Jews, are deeply religious. It may be as a result of this that there is a measure of extremism in Arab character and in Arab’s commitment to whatever he believes. This extremism is uncompromising and denies individuals the ability to cooperate. This is one of the weaknesses of the Arabs today in their attempt to establish a more perfect union. Of course, when ultimately the chips are down, like members of other societies, Arabs come together and there is this fascinating ability to forgive completely – an extremist attitude itself – all the previous misgivings [. . .] Arabs might be feuding cats and dogs one day; then they have a summit meeting in which the same fighting parties would engage in kissing and hugging each other as if all sins are gone forever[. . .] 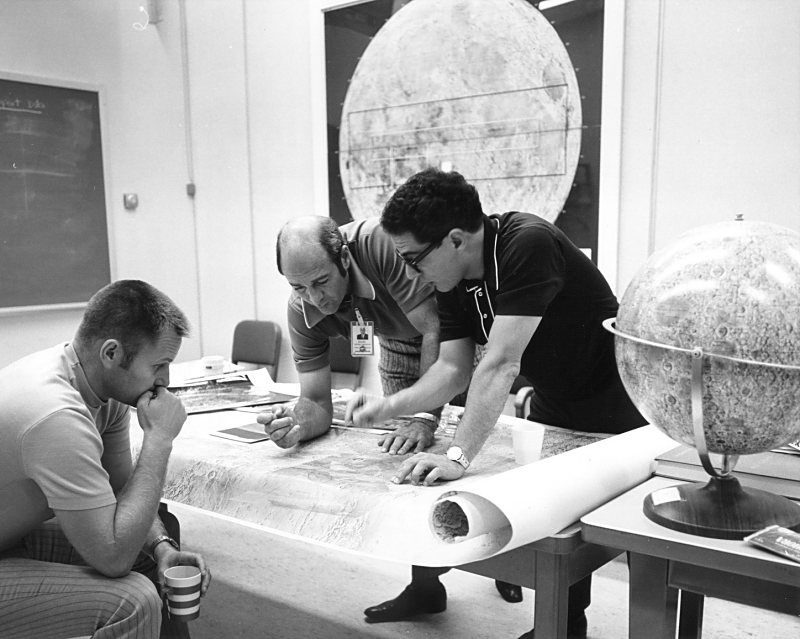 During the last fifty years of modern history, every fifteen years of Arab life is roughly equivalent, in terms of progress, to one century of Western development, thanks to the reverse process of Western civilization’s contributions to the Arabs of Today. By 1920 the Arabs had several hundred college graduates. Presently, there are hundreds of thousands of Arab college graduates with B.A.’s, M.A.’s and Ph.D.’s. With the latest huge revenue coming to the Arab people, the Arabs are building schools, hospitals, maternity centers and recreational facilities by the hundreds[. . .] Arab scientists today are engaged in every field of investigation. Doctor Farouk Elbaz of Egypt, now a U. S. citizen, was the space geologist for Apollo 17. The beginning of Arab Renaissance is at hand.

Ed’s note:
For the significance of the year 1973 in the Middle East, see, for example, “The October Arab-Israeli War of 1973: What happened?”
On Oil embargo

Next article THE SECRET BEHIND THE SUCCESS OF LA GRAMOLA DISCOS »