My daughter, who is nearly nine, has suffered from severe cerebral palsy since birth. In these 9 years I have learned a lot, even if a little late, about looking after and treating a child with c.p.

At six months she was diagnosed as having c.p. and at 9 months we were given exercises for her to do, following the Bobath method. No-one at this stage emphasised the urgency of time i.e. apparently it is between the age of one month to one year when all the most important and effective treatment should be carried out.

After that the correct pattern becomes more difficult to set. 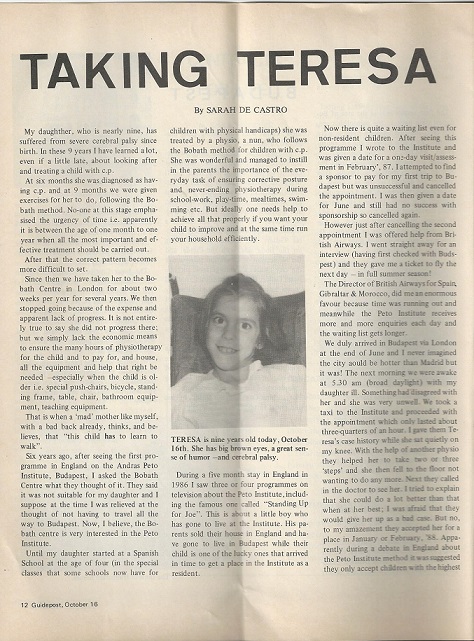 Since then we have taken her to the Bobath Centre in London for about two weeks per year for several years. We then stopped going because of the expense and apparent lack of progress. It is not entirely true to say she did not progress there; but we simply lack the economic means to ensure the many hours of physiotherapy for the child and to pay for, and house, all the equipment and help that right be needed – especially when the child is older i.e. special push-chairs, bicycle, standing frame, table, chair, bathroom equipment, teaching equipment.That is when a ‘mad’ mother like myself, with a bad back already, thinks, and believes, that “this child has to learn to walk”.

Six years ago, after seeing the first programme in England on the Andras Peto Institute, Budapest, I asked the Bobath Centre what they thought of it. They said it was not suitable for my daughter and I suppose at the time I was relieved at the thought of not having to travel all the way to Budapest. Now, I believe, the Bobath centre is very interested in the Peto Institute. . .

During a five month stay in England in 1986 I saw three or four programmes on television about the Peto Institute, including the famous one called “Standing Up for Joe”. This is about a little boy who has gone to live at the Institute. His parents sold their house in England and have gone to live in Budapest while their child is one of the lucky ones that arrived in time to get a place in the Institute as a resident. 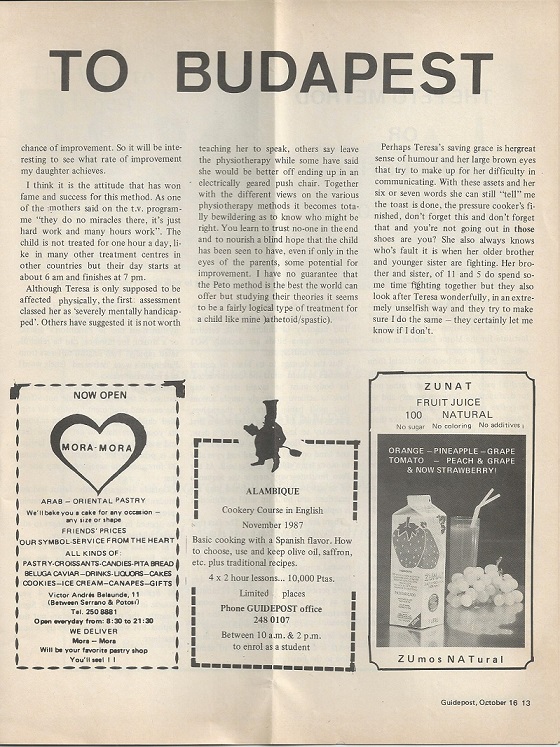 . . . After seeing this programme I wrote to the Institute and was given a date for a one-day visit/assessment in February, ‘87. I attempted to find a sponsor to pay for my first trip to Budapest but was unsuccessful and cancelled the appointment. I was then given a date for June and still had no success with sponsorship so cancelled again.

However just after cancelling the second appointment I was offered help from British Airways. I went straight away for an interview (having first checked with Budapest) and they gave me a ticket to fly the next day – in full summer season!

The Director of British Airways for Spain, Gibraltar & Morocco, did me an enormous favour because time was running out and meanwhile the Peto Institute receives more and more inquiries each day and the waiting list gets longer.

We duly arrived in Budapest via London at the end of June and I never imagined the city would be hotter that Madrid but it was! The next morning we were awake at 5:30 am (broad daylight) with my daughter ill. Something has disagreed with her and she was very unwell. We took a taxi to the Institute and proceeded with the appointment which only lasted about three-quarters of an hour. I gave them Teresa’s case history while she sat quietly on my knee. With the help of another physio they helped her to take two or three ‘steps’ and she then fell to the floor not wanting to do any more. Next they called in the doctor to see her. I tried to explain that she could do a lot better than that when at her best; I was afraid that they would give her up as a bad case. But no, to my amazement they accepted her for a place in January or February, ’88. Apparently during a debate in England about the Peto Institute method it was suggested that only accept children with the highest chance of improvement. So it will be interesting to see what rate of improvement my daughter achieves.

Although Teresa is only supposed to be affected physically, the first assessment classed her as ‘severely mentally handicapped’. Others have suggested it is not worth teaching her to speak, others say leave the physiotherapy while some have said she would be better off ending up in an electrically geared push chair. Together with the different views on the various physiotherapy methods it becomes totally bewildering as to know who might be right. You learn to trust no-one in the end and to nourish a blind hope that the child has been seen to have, even if only in the eyes of the parents, some potential for improvement. I have no guarantee that the Peto method is the best the world can offer but studying their theories it seems to be a fairly logical type of treatment for a child like mine (athetoid/spastic).

Perhaps Teresa’s saving grace is her great sense of humour and her large brown eyes that try to make up for her difficulty in communicating. With these assets and her six or seven words she can still “tell” me the toast is done, the pressure cooker’s finished, don’t forget this and don’t forget that and you’re not going out in those shoes are you? She also always knows who’s fault it is when her older brother and younger sister are fighting. Her brother and sister, of 11 and 5 do spend some time fighting together but they also look after Teresa wonderfully, in an extremely unselfish way and they try to make sure I do the same – they certainly let me know if I don’t. 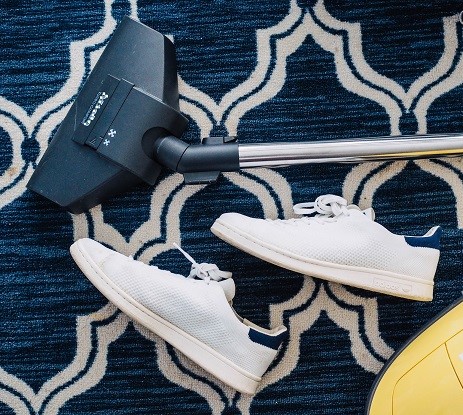 Next article Stateside Stories: A history of St. Patrick for his Day! »