A GUIDEPOST REPRINT: “Segovia’s Aqueduct: The Devil Did It,” 2 September 1983

There are several theories as to how the great aqueduct at Segovia was built. Since it is of such mammoth proportions, one theory is that it was constructed by Hercules. Another theory, and one that has become legend, is that Lucifer and his engineering crew threw up the aqueduct in the course of one, wild stormy night. Because it is so unreal, so imposing, so awe-inspiring, the last theory does seem the most likely and is the very reason the Segovians call the aqueduct the Devil’s Bridge.

Segovia’s Aqueduct: The Devil Did It
2 September 1983 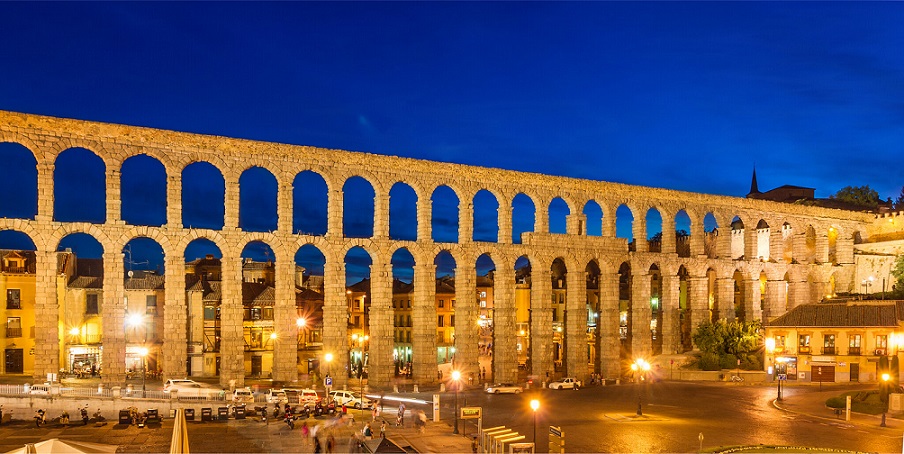 There are several theories as to how the great aqueduct at Segovia was built. Since it is of such mammoth proportions, one theory is that it was constructed by Hercules. Because it is so enduring and indestructible, another theory has it that the Romans were its builders. Still another theory, and one that has become legend, is that Lucifer and his engineering crew threw up the aqueduct in the course of one, wild stormy night.

Colossal, enormous, magnificent, its huge arches reach down from the hill-side, across the valley that is the town square, and into the center of the town. A fantastic, imposing, unbelievable structure. Seen from a distance, through a mist, it has an airy quality, appearing delicate and fragile – almost as though it might vanish before one’s eyes. Because it is so unreal, so imposing, so awe-inspiring, the last theory does seem the most likely and is the very reason the Segovians call it the Devil’s Bridge. 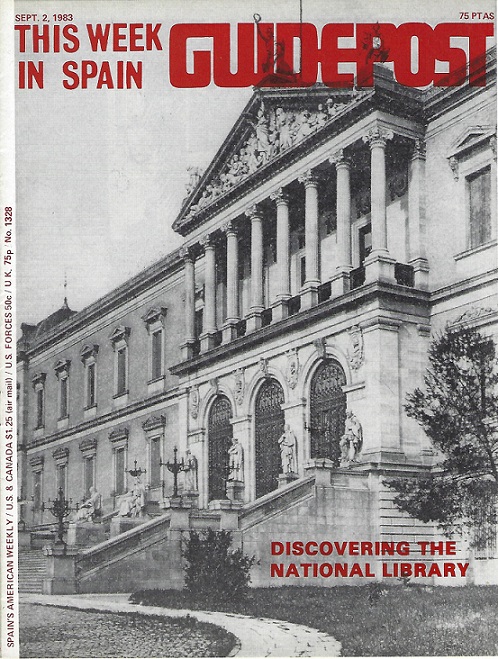 It is well known how powerful the devil is, and given a motive, for instance the claiming of a young Segovian maiden’s soul, the devil could quite plausibly accomplish such an unheard of engineering feat.

This, they say in Segovia, is how the aqueduct came to be – how it sprang up overnight – the result of a pact between a young girl who was tired of carrying water for her mistress from a spring far up in the hills, and the devil who agreed to bring the water to the town in exchange for her soul – all this to be accomplished in the course of one night and completed before dawn.

And it very nearly was! 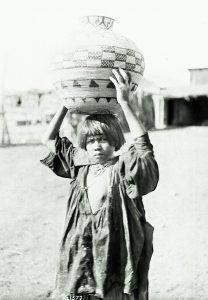 During those hours between sunset and dawn, the devil’s helpers hammered rocks into shape, flew with them from the quarry to the village, and thrust them into place. The din of the hammers striking rock sounded like thunder and the sparks which flew flashed across the sky, like lightning.

The roar sounded even above the terrible storm which raged throughout the night and kept the fearful Segovians indoors cringing with terror. And all this time the frightened girl, regretting her impulsive action, was praying frantically to the Virgin Mary to save her soul. 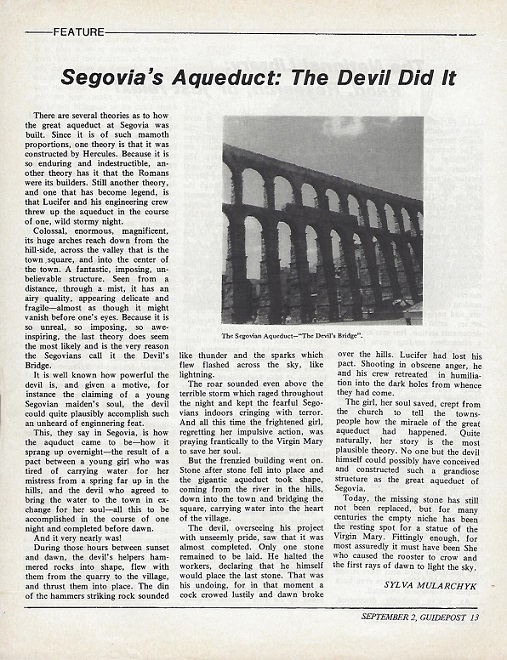 But the frenzied building went on. Stone after stone fell into place and the gigantic aqueduct took shape, coming from the river in the hills, down into the town and bridging the square, carrying water into the heart of the village.

The devil, overseeing his project with unseemly pride, saw that it was almost completed. Only one stone remained to be laid. He halted the workers, declaring that he himself would place the last stone. That was his undoing, for in that moment a cock crowed lustily and dawn broke over the hills. Lucifer had lost his pact. Shooting in obscene anger, he and his crew retreated in humiliation into the dark holes from whence they had come.

The girl, her soul saved, crept from the church to tell the towns-people how the miracle of the great aqueduct had happened. Quite naturally, her story is the most plausible theory. No one but the devil himself could possibly have conceived and constructed such a grandiose structure as the great aqueduct of Segovia.

Today, the missing stone has still not been replaced, but for many centuries the empty niche has been the resting spot for a statue of the Virgin Mary. Fitting enough, for most assuredly it must have been she who caused the rooster to crow and the first rays of dawn to light the sky.

Previous article « THIS GHOST WILL SPOOK YOU AND YOU’LL BE GLAD!

Next article STATESIDE STORIES: 50 Years Since the Moon Landing! »