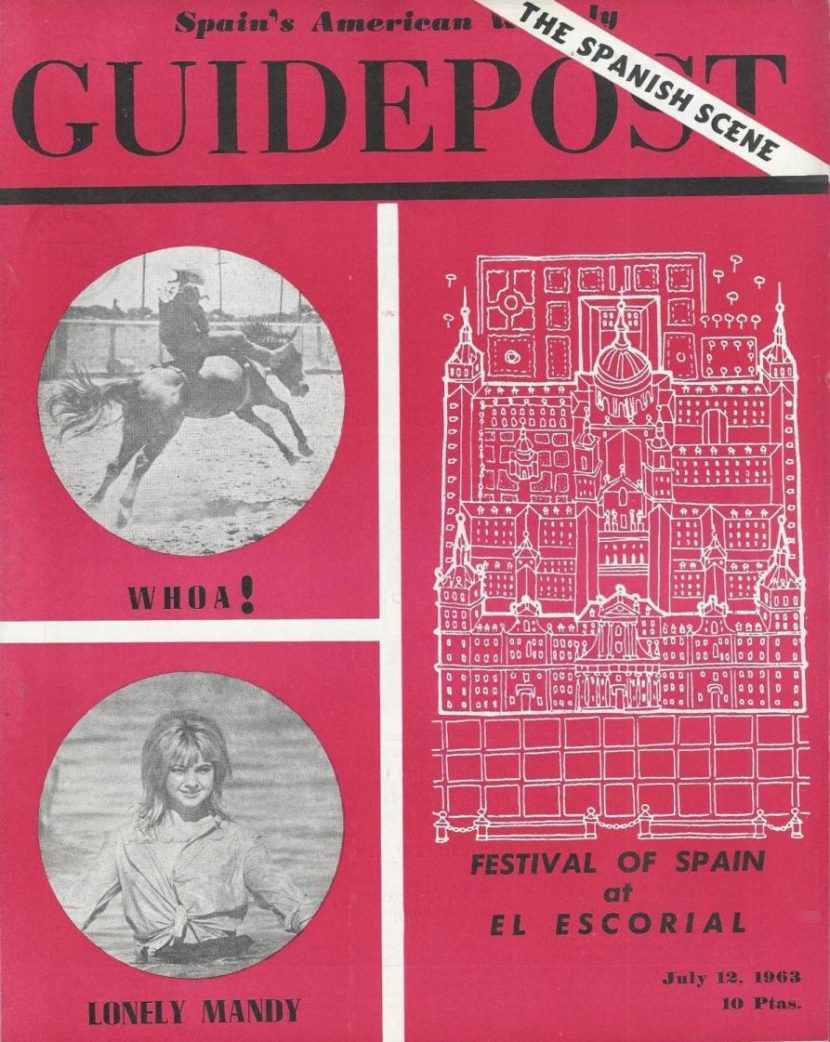 Travelling is at such a pace nowadays that before you finish a leisurely lunch of paella, you are plagued by the thought that you could have been a third of the way across the Atlantic in the time. Each airline competes with taking you faster with fewer stops than any other airline and now you can travel without seeing anything except a first run movie. It was that once after a long drive you would be asked what you saw but now it is how “fast did you make it. Oh, I made it in less.”

Well, it is summer time now when all movement is poured stickily out of a bottle. It is no time to do anything at all. And so here’s a Torremolinos without movement in, and for, a summer afternoon.

AT the end of Calle San Miguel behind the church, a very old woman sits in the shadows in the summertime and in the sunlight in wintertime. She brings her pot with her so that she can eat in the air and disappears only when twilight has gone very deep. They say that she owns the land she watches and does not want to stop watching. No one ever speaks to her and no dog ever smells at her food. Does she dream, or is she a dream?… If James Whistler saw her, she would be immortal but, as it is, she is only a very old woman. 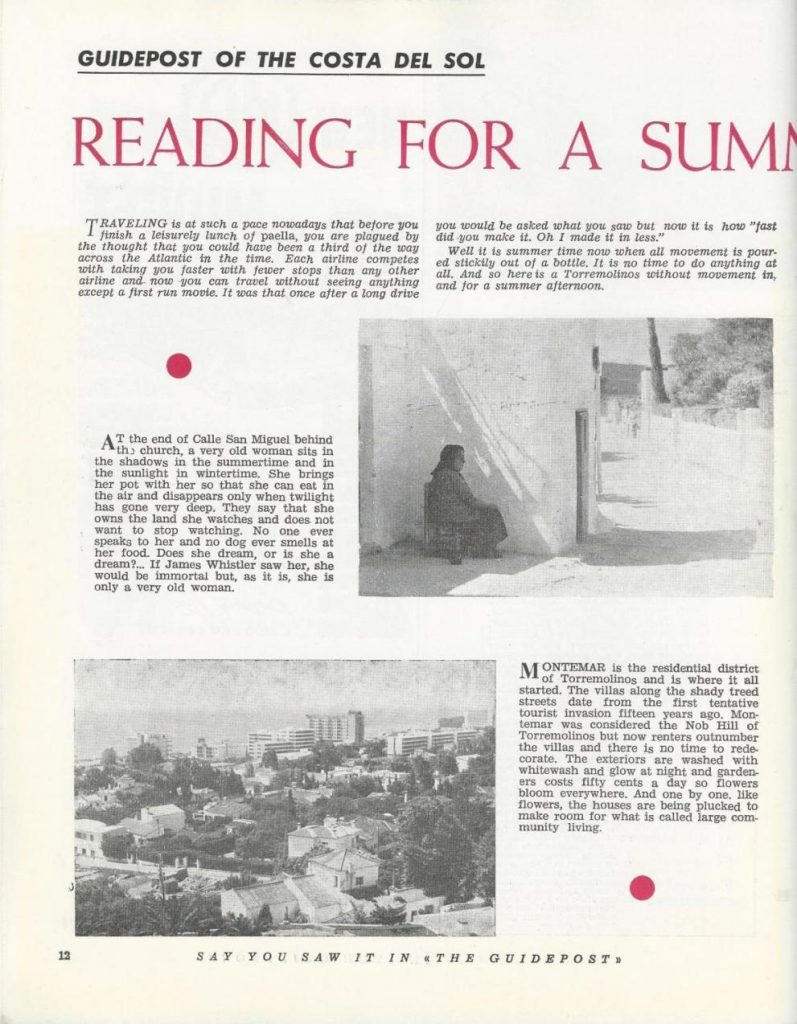 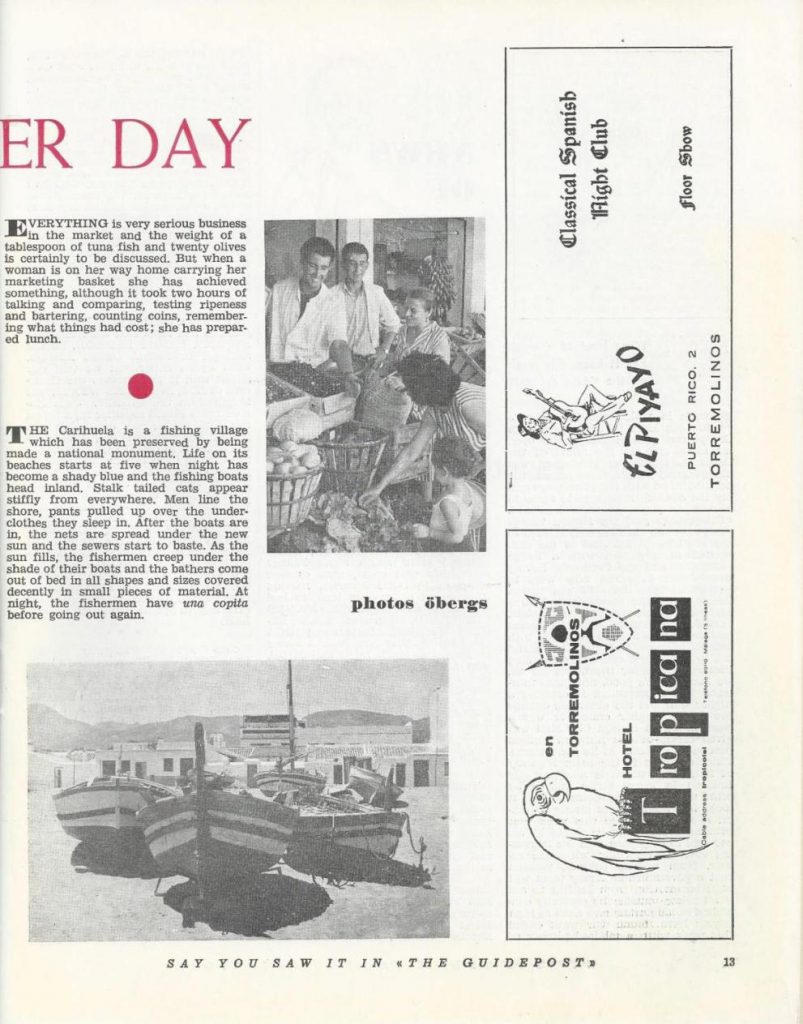 MONTEMAR is the residential district of Torremolinos and is where it all started. The villas along the shady treed streets date from the first tentative tourist invasion fifteen years ago. Montemar was considered the Nob Hill of Torremolinos but now renters outnumber the villas and there is no time to redecorate. The exteriors are washed with whitewash and glow at night and gardeners cost fifty cents a day so flowers bloom everywhere. And one by one, like flowers, the houses are being plucked to make room for what is called large community living.

EVERYTHING is a very serious business in the market and the weight of a tablespoon of tuna fish and twenty olives is certainly to be discussed. But when a woman is on her way home carrying her marketing basket she has achieved something, although it took two hours of talking and comparing, testing ripeness and bartering, counting coins, remembering what things had cost; she has prepared lunch.

THE Carihuela is a fishing village which has been preserved by being made a national monument. Life on its beaches starts at five when night has become a shady blue and the fishing boats head inland. Stalk tailed cats appear stiffly from everywhere. Men line the shore, pants pulled up over the underclothes they sleep in. After the boats are in, the nets are spread under the new sun and the sewers start to baste. As the sun fills, the fishermen creep under the shade of their boats and the bathers come out of bed in all shapes and sizes covered decently in small pieces of material. At night, the fishermen have una copita before going out again. 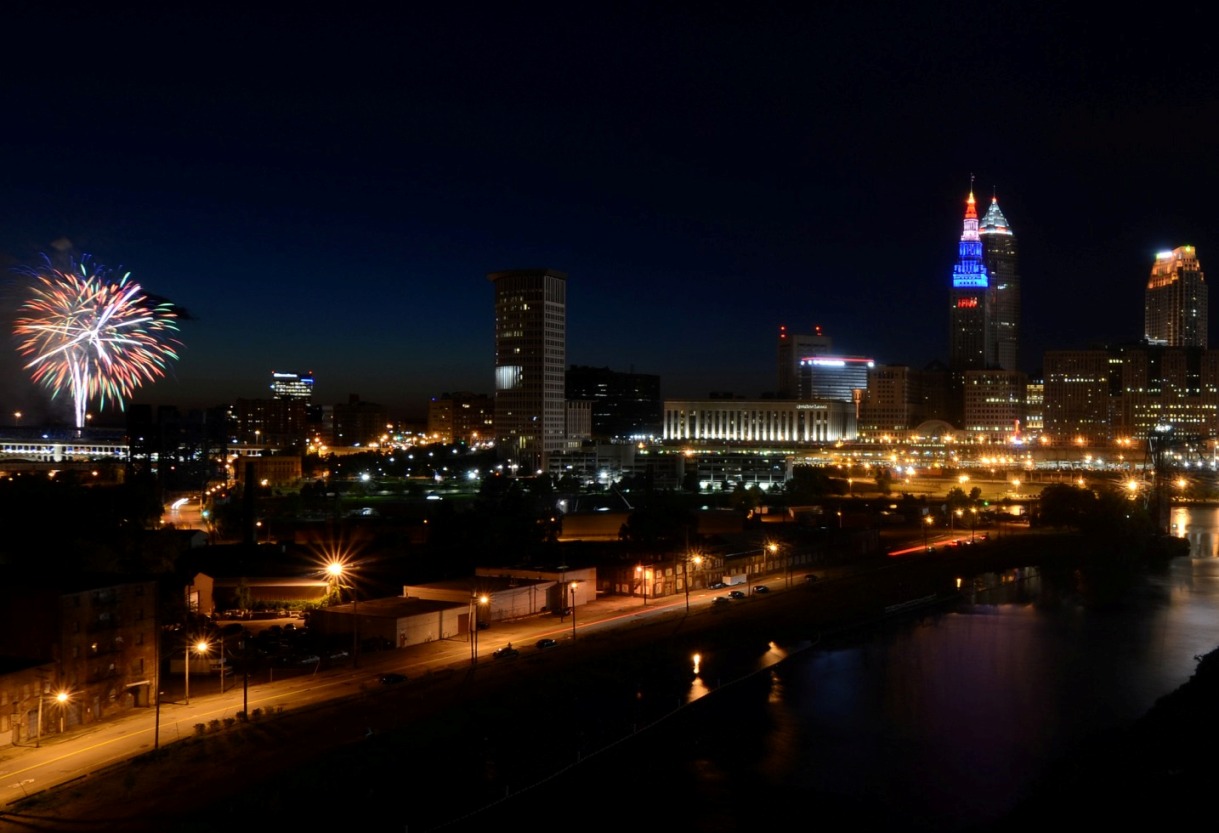 Next article HEAD FOR ROLL MADRID RESTAURANTE NEOAMERICANO FOR THE ACM 4TH OF JULY CELEBRATION! »