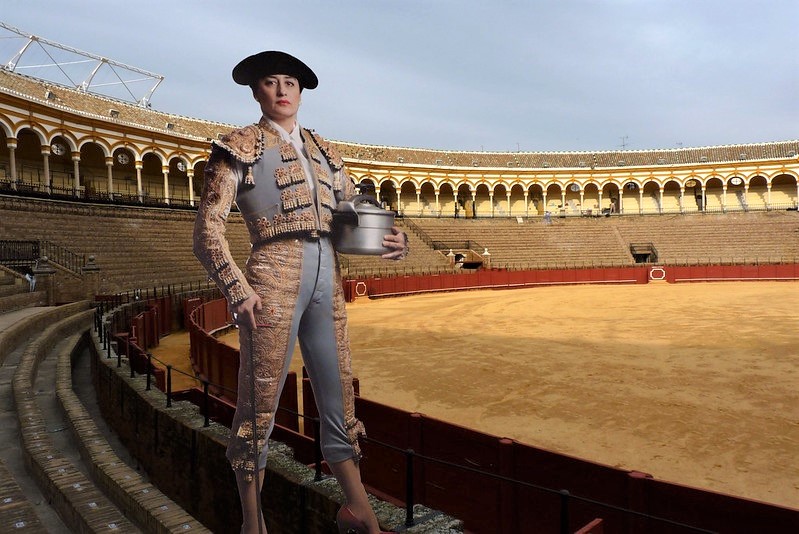 Bullfighting is a man´s world, but I don´t think there is all this machismo and sex in it. It is more valor
than virility, and women have had valor, internal fortitude for hundreds of years 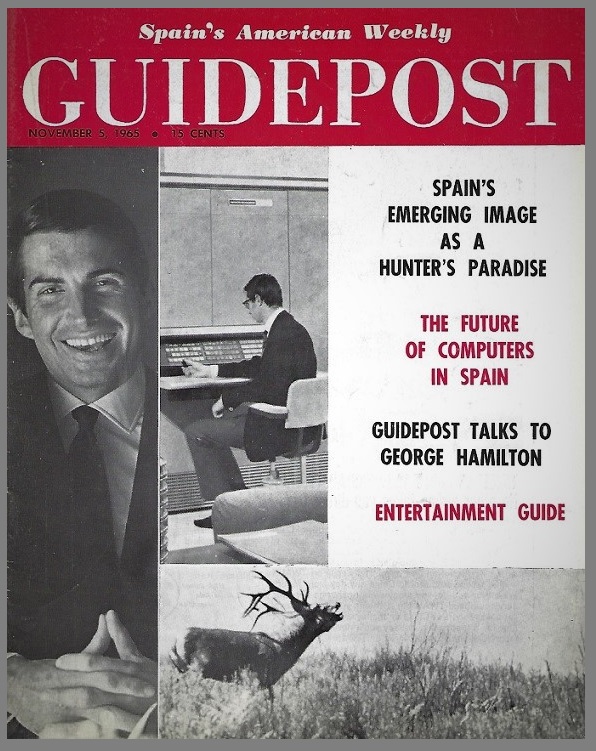 DIXIE LEE—La emperatriz yanqui del toreo, la guapísima y sensacional torera Norteamericana de Miami, Florida— fought and killed over 500 bulls in Mexico between the years 1957 and 1963. Her real name is Sandy Davies and she is a tall, stunning girl in her twenties. Married not long ago to Gareth Davies, she is now making her home in Madrid while her husband works with a film company.

She is disappointed that Spain does not allow ladies on foot because she would like to fight again (she had a bad automobile accident in 1964 which has kept her out of the ring). However, overtures have been made to her for fights in Portugal and France and she may return to the ring next year.

The usual question is: How did a lovely girl like you get into bullfighting? Sandy says, “I was lucky. I had a godfather, Edmundo Guerrero, who had a ganadería in San Juan del Río, Queretero. I went to Mexico City College and flunked the liberal arts course because all I wanted to do was fight bulls. I was out in Chapultapec Park practicing with the cape and the muleta all the time. One day I went to a tienta and they let me in the ring. I broke my leg, but the three passes I got in before getting hit were really marvelous!” 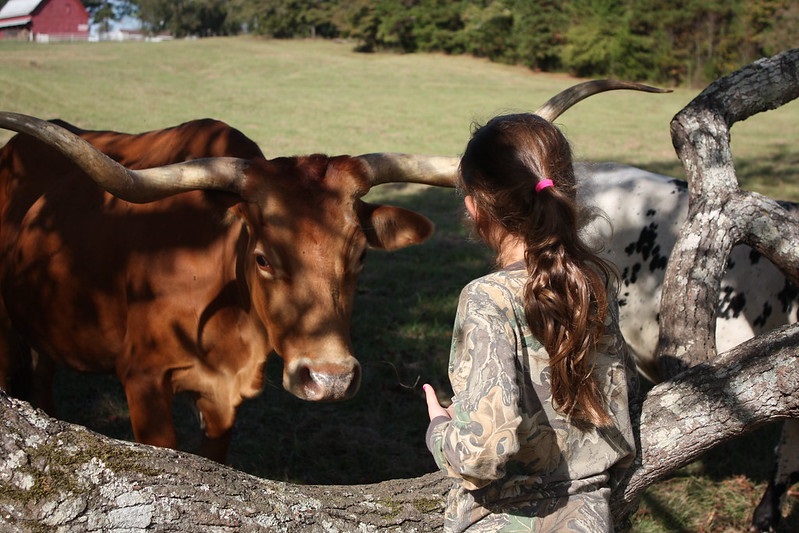 “The cow would knock me flat, and Pepe Luis Méndez would lift me up off the ground by my ponytail and stand me on my feet. Tears would be streaming down my face but he would say, ‘Stop crying! Get up! Bullfighters don´t cry!'”

Convinced that she was serious, and talented as well, Pepe Luis Méndez, an ex-matador, took over her training. Sandy lived at the ranch and trained every day. “The cow would knock me flat, and Pepe would walk over and lift me up off the ground by my pony tail and stand me on my feet again. Tears would be streaming down my face because it hurt so, and he would say, ´Stop crying! Get up! Bullfighters don´t cry!´ I used to hate him for this, but when I got into the ring and really started fighting, his training showed up. Whenever I got knocked down I would automatically get right back up again. And not cry.”

Women can´t take the alternativa, and so fight only bulls between 350 and 420 kilos—novillos. They seem large enough to us.

We asked Sandy about life on the road. “ The life of a bullfighter is not glamorous, even if you are a woman,” she says. “When we arrived at a new city, my cuadrilla (by this time my trainer was my banderillero, Adrián Avila) and I would be whisked to the local hotel. Adrian´s wife traveled with us everywhere as my dueña. She was the one who helped me dress, but she and I did all the work for the cuadrilla, ironing their shirts, and sewing on buttons, and so forth. The cuadrilla is supposed to wait on the bullfighter, but in my case it was the other way round.”

Sandy gave her opinion candidly about the men fighting today. “I adore Ordóñez for his art and Dominguín for his mastery. El Cordobés is fantastic, but not classical. But I think bullfighting has been getting dull, and El Cordobés is a marvelous showman. And he tries, whether he gets a good or a bad animal. A young man to watch, I think, is Palomo Linares who is only 16 years old and will probably take his alternativa next year.” 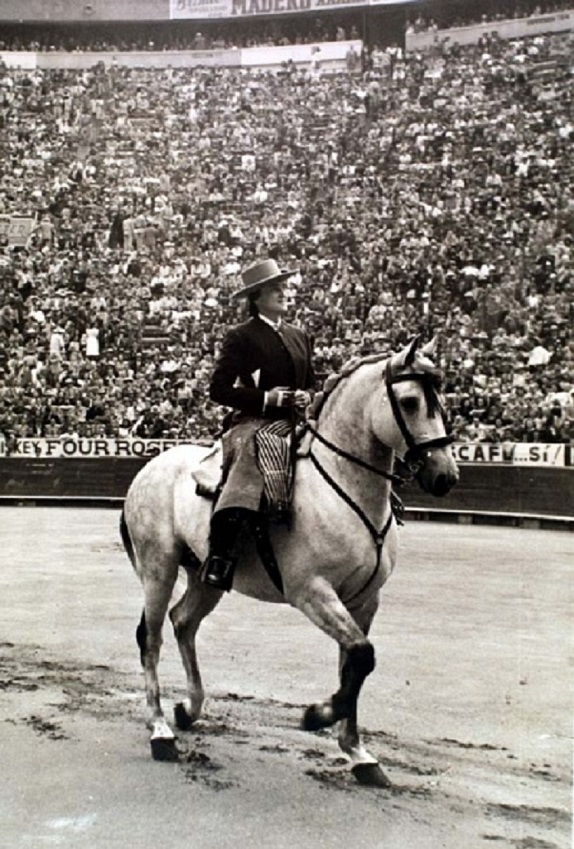 Conchita Cintrón: She was “fabulous and probably one of the few women fighters (both on foot and rejoneador) that men respected”

“Bullfighting is a man´s world, but I don´t think there is all this machismo and sex in it that some people say it has. It is more valor than virility, and women have had valor, internal fortitude for hundreds of years. It is, as well, a very difficult technique, and very hard work. I think bullfighters want to look well in the ring, of course, but this is not necessarily machismo. To look well means you´ve mastered the technique. It´s years of vigorous training and hard work every single day, especially during the season. You have to know what you´re doing to be a bullfighter if you don´t want to get killed.”

Warning to her subject, she went on. “Conchita Cintrón was fabulous and probably one of the few women fighters (both on foot and rejoneador) that men respected. I fought a lot of mano a mano with Juanita Aparicio, very feminine and tiny. She always wore a skirt in the ring. Her technique was marvelous, but she’d been fighting since she was six. Her father and grandfather were bullfighters.”

But the Yankee Empress of Bullfighting does want a family one day, and when that day comes, “No more fighting. A family and fighting don´t mix.”

We can just see Sandy´s future son or daughter one day in school, standing up before the class and saying, “Well, one Sunday afternoon in Monterrey, Mexico, my mother cut two ears and a tail.” 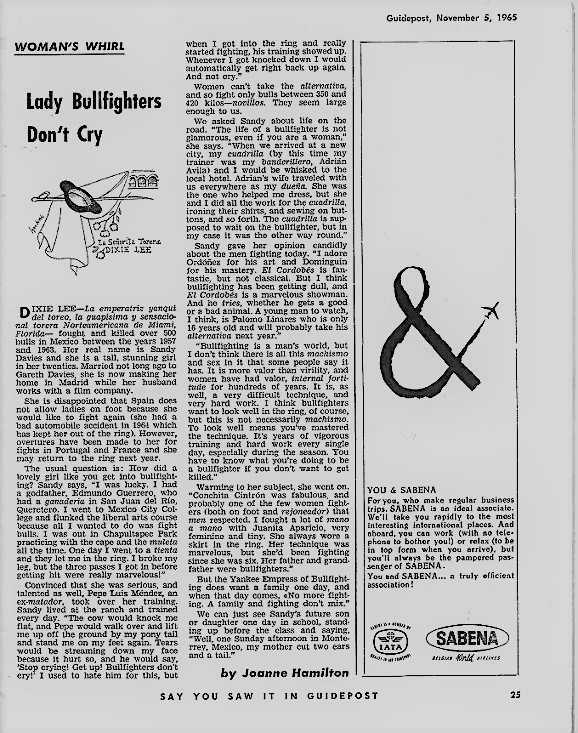 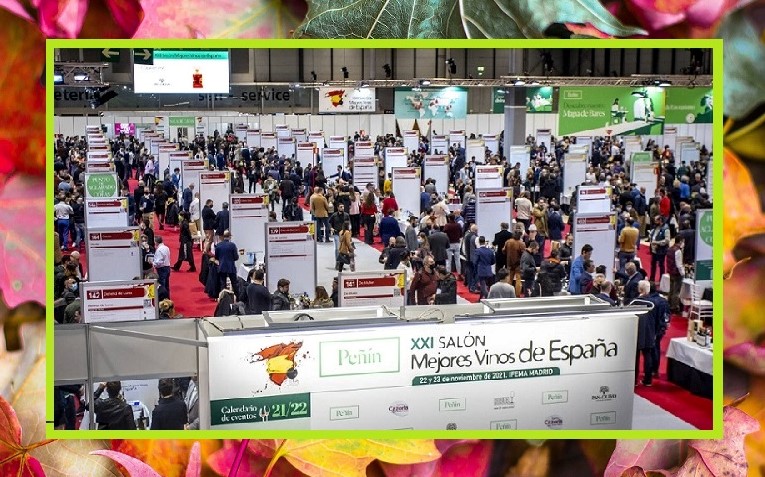 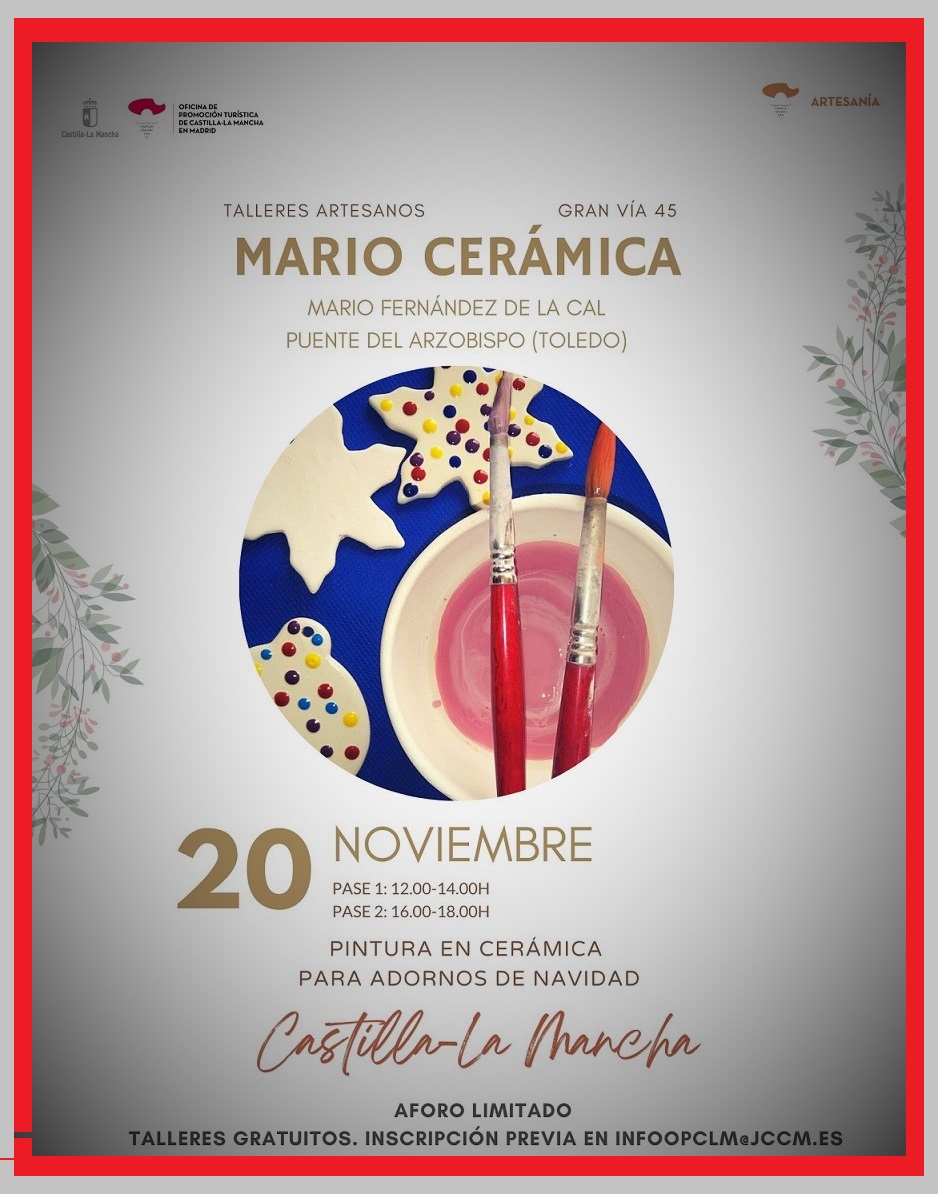 Next article BEFORE YOU KNOW IT, CHRISTMAS IS HERE! Free worshop on Ceramic painting for Christmas Decor »