As the leaves change color and fall to the ground, a great many men in Spain, as in almost every country in the world, get their guns out of the closets and head for the fields and forests. The hunting season has arrived. 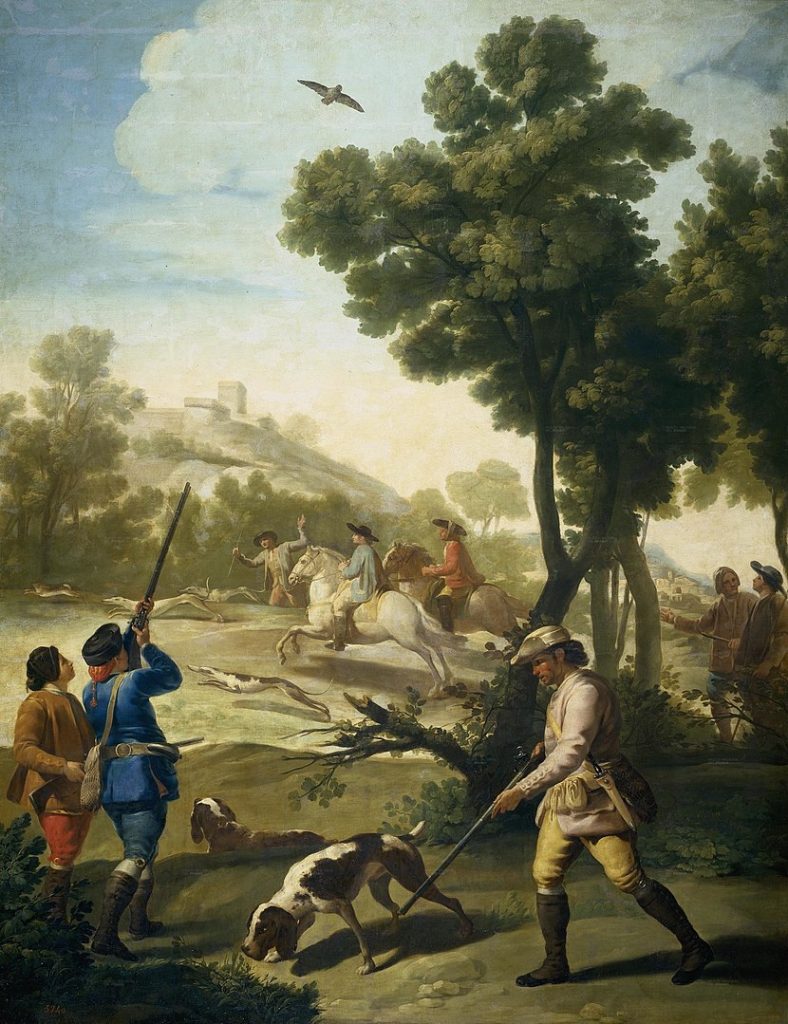 Spain’s varied topography offers hunters a vast choice of terrains and a wide range of game. Big game [. . .] [and] small game [. . .] are all available and, if one is lucky, abundant. The seasons vary from species to species [. . .]

Many of the provinces [. . .] have special restrictions as to days when hunting is prohibited or otherwise restricted. Also, many species are protected by local restrictions which in some cases, are total prohibitions. There are also national restrictions prohibiting the hunting of certain species – stork, lynx, eagles, pheasant, and many other rare or limited species of animals and birds. On the other hand, there are year ‘round open seasons on animals such as wolves, coyotes, foxes, bobcats, and other predatory animals. From time to time, special extinction hunts are organized by provincial governments.

Discussions are being held in the Spanish Parliament with regards to modifying the present hunting laws. Much comment has been given to this matter in the Spanish press, and opinions are mixed [. . .]

As for licenses, all persons who intend to hunt must possess a general permit. These are obtained at the Dirección General de Seguridad in the Puerta del Sol [. . .]

The Spanish partridge has gained an international reputation as being one of the most elusive birds around. Small strong and extremely fast, many of the best hunters find it difficult to bring home a good batch. However, it is well worth the efforts, and possible frustration, as the bird is also renowned for its exquisite flavor. The best areas for the partridge are the provinces of Toledo, Cuidad Real, Cuenca, Guadalajara, Cáceres and Albacete. In recent years, travel agents in Spain, and in other countries, have organized special tours for hunters. Included are travel, lodging, meals, guides, entertainment and basic licenses [. . .] Some landowners are also getting in on the act with special hunts organized on their properties and charges per bird [. . .] Information about hunting around small villages can be obtained from the Ayuntamientos – City Halls – of the villages [. . .] 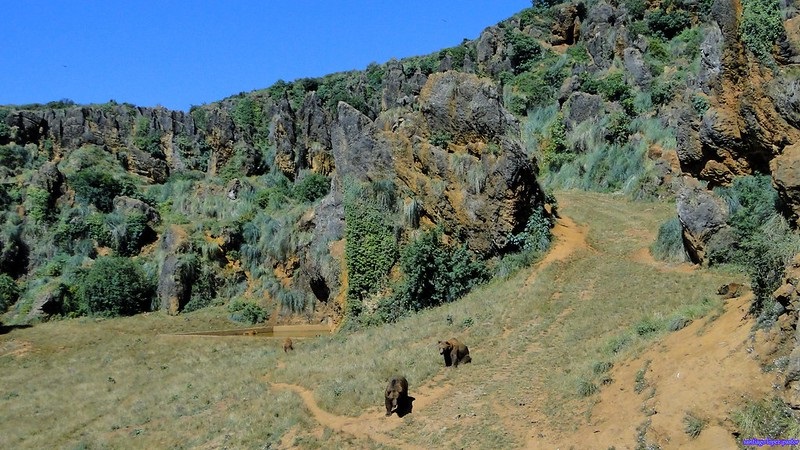 Bear in the Cabarceno Natural Park off Santander

As a rule, the best big game hunting is to be found on the National Game Reserves managed by the Servicio Nacional de Caza y Pesca Fluvial, and the Subsecretaría de Turismo. Both offices issue the special permits requires for their respective reserves [. . .]

The best waterfowl shooting is found around the delta of the Ebro River, the estuaries of various rivers in Galicia, the Albufera area of Valencia, and the lower estuary of the Guadalquivir River in the provinces of Sevilla and Huelva. The island groups of the Balearics and canaries also offer good water bird hunting. The most commonly encountered species of duck are pintails, red-heads, and some mallards, with flights of teal and widgeons seen quite frequently.

Generally speaking, almost all hunting in Spain is done with shotguns [. . .] Firearms can be brought into Spain for hunting, but the amount of red-tape required for permits to possess make it worth investigating the locally manufactured arms [. . .] Many of the world’s more famous hunters prefer the balance and workmanship of the Spanish arms over all others [. . .]

It is recommended that foreigners hunting in Spain either make as complete arrangements as possible before going to any of the hunting areas, or arrange a hunting party with some Spanish friend who knows what would be necessary.

One other thing, the normal and natural courtesies existing in the rest of the world apply equally in Spain [. . .] Observe the legal requirements and the general customs, and you will really have – HAPPY HUNTING. 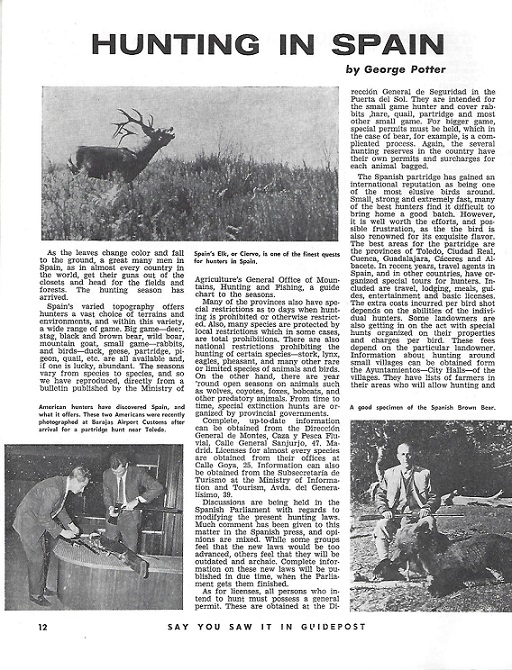 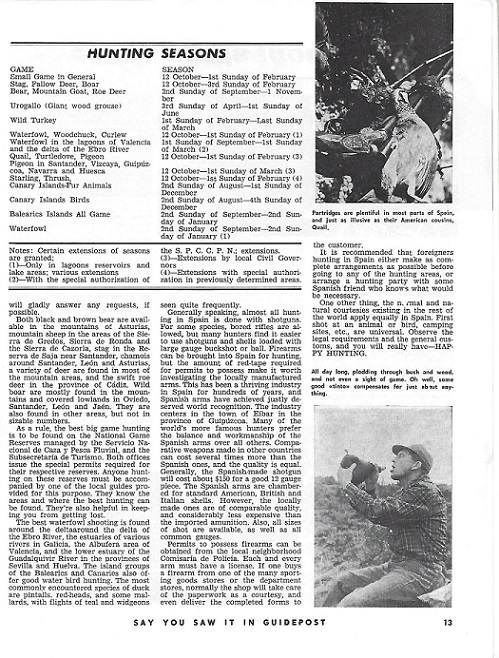 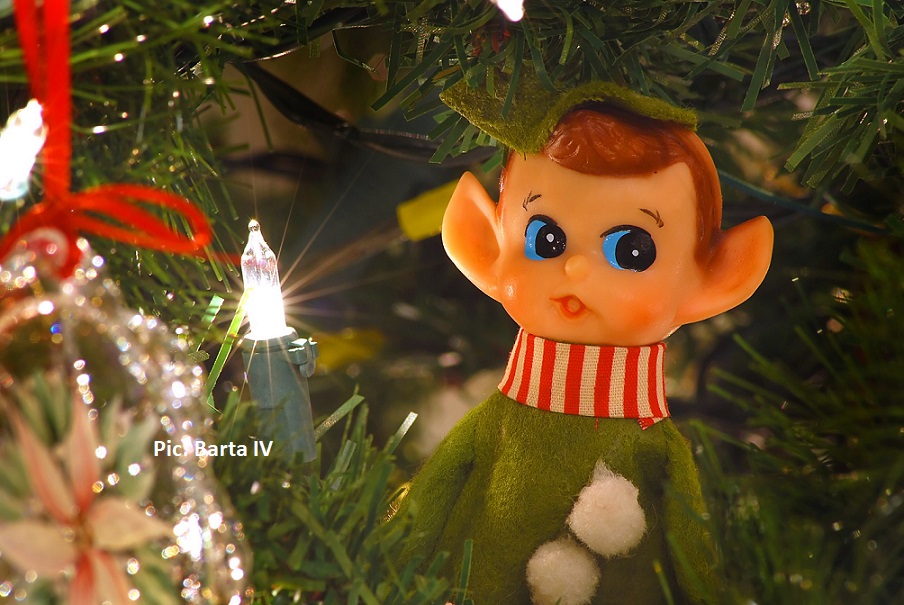 Next article CLIMATE CHANGE: WHAT’S AT STAKE AT THE UN CONFERENCE IN MADRID »