Christmas is a time for remembering family and friends near and far away, and here in Spain it is especially a family holiday for Spanish families are usually quite large and ties are strong. Spaniards make every effort and sacrifice to be with their family and loved ones for this very special and holy day.

Christmas Eve is known in Spain as “La Noche Buena”. Literally this means the Good Night. . .  It principally a religious occasion and a time for family reunions. On this Feast day celebrating the birth of the Christ Child, children are especially indulged and petted and may stay up as late as they like and make as much noise as they want, blowing horns and singing the Villancicos, or rubbing the traditional “zambomba”. This latter is a rustic sort of “musical” instrument said to have developed in Bethlehem when the shepherds brought gifts of wild honey in pottery jars to the Holy Infant, and in their joy, they invented the zambomba. By stretching a skin taut across the mouth of the jar with a dampened stick poked through a hole in it and rubbing the stick up and down, a weird sort of rhythmic noise can be made. It is an awful racket but the kids love it, and they show in this way that they are glad that the baby Jesus was born. 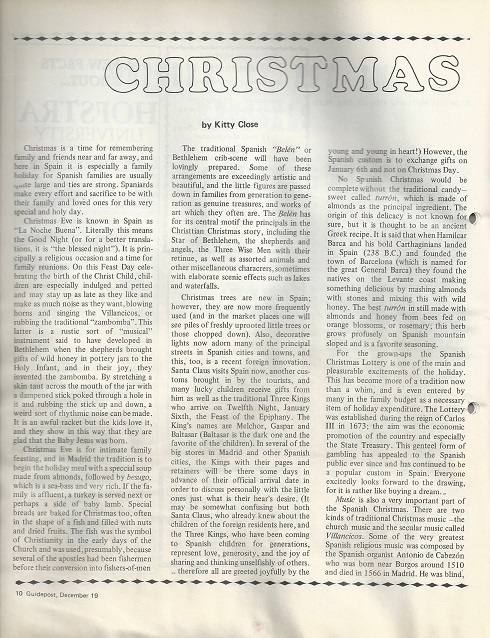 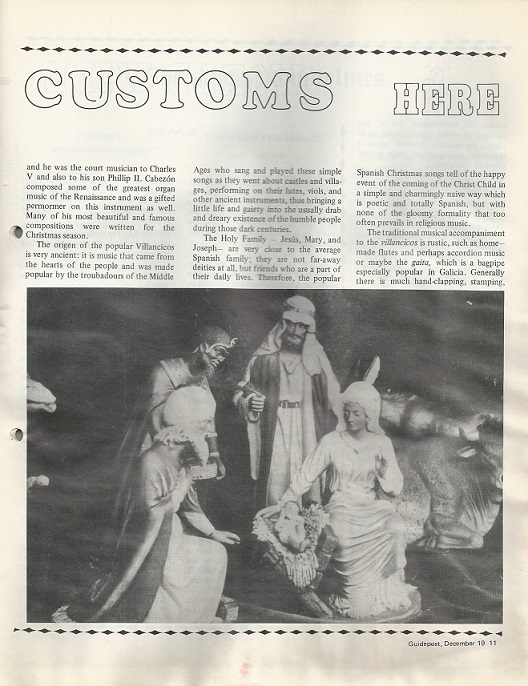 Christmas Eve is for intimate family feasting, and in Madrid the tradition is to begin the holiday meal with a special soup made from almonds, followed by besugo, which is a sea-bass and very rich. If the family is affluent, a turkey is served next or perhaps a side of baby lamb. Special breads are baked for Christmas too, often in the shape of a fish. . .  The fish was the symbol of Christianity in the early days of the Church and was used, presumably, because several of the apostles had been fishermen before their conversion into fishers-of-men.

The traditional Spanish “Belen” or Bethlehem crib-scene will have been lovingly prepared. Some of these arrangements are exceedingly artistic and beautiful, and the little figures are passed down in families from generation to generation as genuine treasures, and works of art which they often are. . . The “belen” has for its central motif the principals in the Christian Christmas story, including the Star of Bethlehem, the shepherds and the angels. . .

Christmas trees are new in Spain; however, they are now more frequently used. . .  Also, decorative lights now adorn many of the principal streets in Spanish cities and towns, and this, too, is a recent foreign innovation. Santa Claus visits Spain now, another customs brought in by the tourists, and many lucky children receive gifts from him as well as the traditional Three Kings who arrive on Twelfth Night, January Sixth, the Feast of the Epiphany. The King’s names are Melchor, Gaspar and Baltasar (Baltasar is the dark one and the favorite of the children) . . .

One of the popular turrón brands

No Spanish Christmas would be complete without the traditional candy-sweet called turrón, which is made of almonds as the principal ingredient. The origin of this delicacy is not known for sure, but it is thought to be an ancient Greek recipe. It is said that when Hamilcar Barca and his bold Carthaginians landed in Spain (238 B. C.) and founded the town of Barcelona. . . they found the natives of Levante coast making something delicious by mashing almonds with stones and mixing it with wild honey. The best turrón in still made with almonds and honey from bees fed on orange blossoms, or rosemary, this herb grows profusely on Spanish mountain sloped and is a favorite seasoning.

For the grown-ups the Spanish Christmas Lottery is one of the main and pleasurable excitements of the holiday. This has become more of a tradition now than a whim, and is even entered by many in the family budget as a necessary item of holiday expenditure. The Lottery was established during the reign of Carlos III in 1673; the aim was the economic promotion of the country and especially the State Treasury. This genteel form of gambling has appealed to the Spanish public ever since and has continued to be a popular custom in Spain. Everyone excitedly looks forward to the drawing, for it is rather like buying a dream. 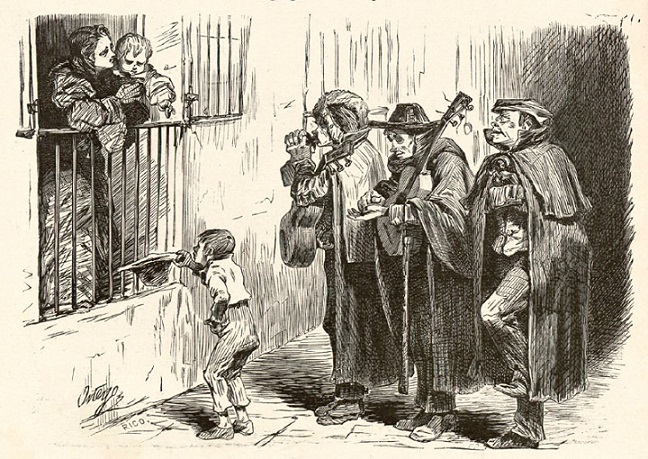 Music is also a very important part of Spanish Christmas. There are two kinds of traditional Christmas music – the church music and the secular music called Villancicos. . . The origin of the popular Villancicos is very ancient: it is music that came from the hearts of the people and was made popular by the troubadours of the Middle Ages who sang and played these simple songs as they went about castles and villages, performing on their lutes, viols, and other ancient instruments. . . The popular Spanish Christmas songs tell of the happy event of the coming of the Christ Child in a simple and charmingly naïve way which is poetic and totally Spanish, but with none of the gloomy formality that too often prevails in religious music. . .

For those who are interested, the music stores will have a wide assortment of villancicos of all sorts for sale during the holidays, and it is a good idea to buy one or two records just to get yourself in the mood of things. Also these will make a novel gift for the folks back home. . .

So have a very Merry Christmas! Felices Navidades, Felices Pascuas.