Whispering palms fronds laze behind fan-shaped bamboo chairs; peach parasol-shaded tables sit back snugly in wavy secretive alcoves; soft music adds spice to after-dinner conversation rather than overwhelming it. Sound like an exotic, faraway place to dine out? Well, exotic it is, but faraway it’s not.

Casablanca is one Madrid restaurant as romantic as Bogart himself and truly an exotic experience for the gourmet dinner. And it’s no farther away than the picturesque Barquillo 29 mirrored corner which this hide-away is tucked into, just off the Castellana and down from the Alonso Martinez Metro.

And though the soft salmon-pink decoration and slow-moving fan would have been the perfect setting for some of those long Bogart-Bergman looks, business men and women and gourmet critics have another reason for keeping Casablanca host-owner, Dick Angstadt, hopping: the excellent cuisine. 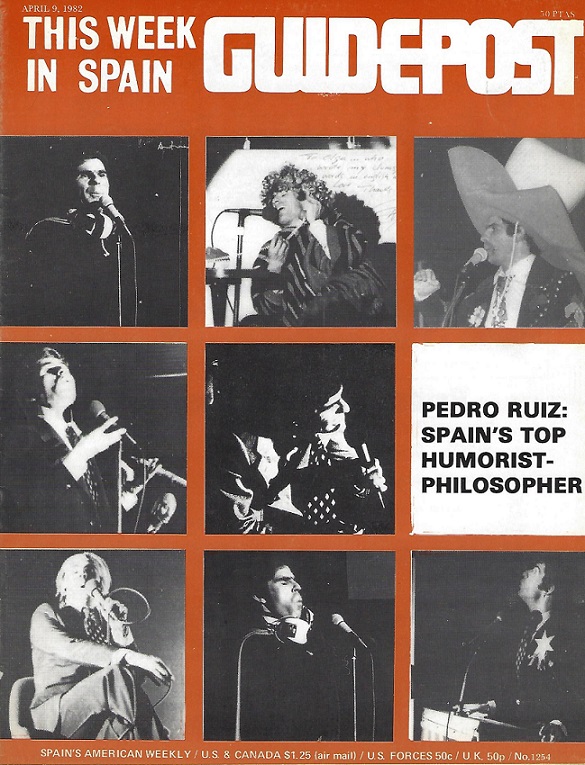 Casablanca, you see, is not just one more pretty face among restaurants, as the lovely Ingrid wasn’t among actresses. And it’s no coincidence that the food and service, like the movie and actors, are characterised by good taste and elegant expertise: that’s exactly what Dick has been striving for in the period since he turned the sliding “Bogui” into his own version of “Play it again, Sam.”

Now with a new but related name, Casablanca has the professionalism of an internationally-experienced chef to go with it: Jose Luis Garcia-Lomas y Elvira, with eight years as top chef at one of New York’s most famous restaurants, “The Four Seasons” and also as owner of his own restaurant where he perfected his theory and practice in culinary artistry.

Wooed back to his hometown of Madrid by the enterprising Dick and given free rein for his creative impulses, Jose Luis has taken the Spanish gourmet world by storm with his ever-changing yet ever-inspired menus. That is, in order to take advantage of seasonal variations in fish, vegetables and fruit supplies, Jose Luis has created seasonal menus of the most mouth-watering specialties in which only the highest-quality food products are used; Dick adds his expertise by finding the best suppliers and maintaining to –notch quality control, and testing each new dish. 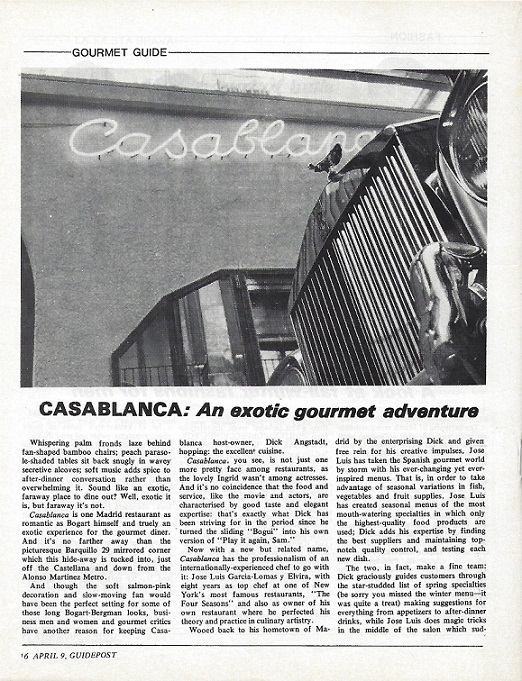 The two, in fact, make a fine team: Dick graciously guides customers through the star-studded list of spring specialties (be sorry you missed the winter menu – it was quite a treat) making suggestions for everything from appetizers to after-dinner drinks, while Jose Luis does magic tricks in the middle of the salon which suddenly appear on your plate as the most heavenly and varied crêpes you can imagine. With their obvious and enthusiastic concern for the customer and high-quality cuisine, they make dining at Casablanca a warm and welcome adventure into the culinary unknown, where even the traditional Caesar Salad is given Jose Luis’ special touch.

I tried the quiche de espinacas which was light and delicious, while the leg of the lamb was very tender and subtly spiced. But the delight of all delights was the orange pudding which Dick suggested I try: never have I been so sorry not to have left more room for dessert.

Coffee and a special after-dinner drink called, naturally enough, “Casablanca”, rounded out an unforgettable meal as the last of the lunch-time crowd waved contented goodbye on their host, who commented, “they come in all tense and in a hurry, but as they begin to enjoy their meal, you see some getting up to call their offices to say they’ll be a bit late, and then usually they’re the last ones to linger on to enjoy a liqueur, coffee, a cigar or a conversation. Jose Luis says they’re not in a hurry, they just confused hurry with hunger.” 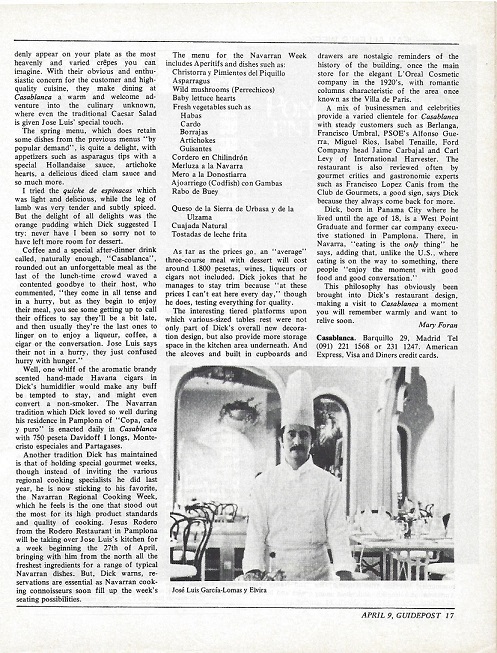 Well, one whiff of the aromatic brandy scented hand-made Havana cigars in Dick’s humidifier would make any buff be tempted to stay, and might even convert a non-smoker. The Navarran tradition which Dick loved so well during his residence in Pamplona of “Copa, café y puro” is enacted daily in Casablanca with 750 peseta Davidoff I longs, Montecristo especiales and Partagases.

As far as the prices go, an “average” three-course meal with dessert will cost around 1,800 pesetas, wines, liqueurs or cigars not included. Dick jokes that he manages to stay trim because “at these prices I can’t eat here everyday,” though he does, testing everything for quality.

A mix of businessmen and celebrities provide a varied clientele for Casablanca with steady customers such as Berlanga, Francisco Umbral, PSOE’s Alfonso Guerra, Miguel Rios, Isabel Tanaille, Ford Company head Jaime Carbajal and Carl Levy of International Harvester. The restaurant is also reviewed often by gourmet critics and gastronomic experts such as Francisco Lopez Canis from the Club de Gourmets, a good sign, says Dick because they always come back for more.

Dick, born in Panama City where he lived until the age of 18, is a West Point Graduate and former car company executive stationed in Pamplona. There, in Navarra, “eating is the only thing” he says, adding that, unlike the U.S., where eating is on the way to something, there people “enjoy the moment with good food and good conversation.”

This philosophy has obviously been brought into Dick’s restaurant design, making a visit to Casablanca a moment you will remember warmly and want to relive soon.