A GUIDEPOST REPRINT: A Wine Well Worth Trying, 26 January 1990 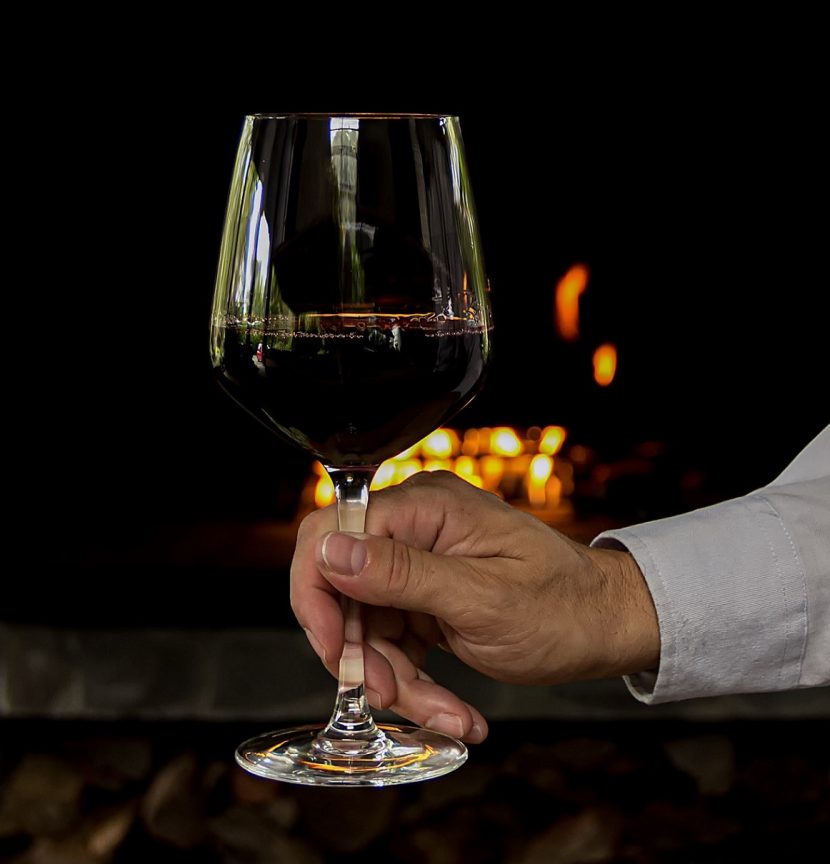 Only those who have experienced what a country like Spain has, during those terrifying days of uncontrolled pandemic and a national healthcare system on the brink of collapse, can understand what it is like to finally have a glimpse of the light at the end of the long and dark tunnel. A light that at first was feeble and flickering, and now growing brighter.

We don’t for a single moment forget that there are still those who suffer from the pandemic. And as long as there are, we will keep on doing our utmost to comply with the rules so that there will be less and less contagion and those who have made the supreme sacrifice of putting their lives on the line to save the sick may not have done so in vain. Those rules that to some now sound banal and look too restrictive.

As we move toward the new normal with all its attendant consequences, the enormity of which is incalculable, we won’t ever forget those frontline heroes who have made it possible for us to be where we are now, safe and cautiously hopeful.

Upon reaching this point, we turn our attention to what used to be so good and will probably be just as good in the new normal: the fine Spanish wine to celebrate the wonderful heroism for which we are grateful, and to offer to the gods so that those who are still suffering from the virus may get well soon. And that a timely vaccine may be discovered to save us all from a frightful resurgence of the pandemic.

The wine growing district of El Condado is
reasonably  well-known by wine lovers in Spain but the
general  public still  tends  to stick to the old favourites like Rioja, mainly
because El Condado  table wines have been introduced in the markets relatively recently.

The first wine to be drunk in the New World was the very same that came from the Condado Vineyards.

The origin of the wines
DEL CONDADO

The wine producing region of the CONDADO (county) extends across the plain of the lower Gualdalquivir river, from the divide made by its affluent, the Guadiamar river, to the tinto river, from which point the 3 caravels that discovered America set sail.

The wines of the CONDADO DE HUELVA are the exquisite result of a very ancient tradition that goes back in its origins to the seventh century BC.

Tartessians, Romans, Visigoths and Arabs, all considered these wines as a merchandise of great value in their commercial relations with other nations, hence the great importance that wine cultivation has always had in this region. By these very same means, the world came to know the delicate tastes of a land that later would become famous, because the men of the “Condado de Huelva” made a great discovery: the New World.

The first wine to be drunk in the new world was the very same that came from the Condado vineyards.

In the eighteenth and nineteenth centuries, the noble wines of the CONDADO DE HUELVA conquered even the demanding palates of Europe. Today, despite technological advancements, these wines continue to mature according to the same ancient methods inherited down through the centuries. By these means only, the quality which makes this area so famous is maintained.

Tradition has proved to be the only method to follow in order to achieve the maturity of these wines, and in order to protect that tradition there exists a law called Denominación de Origen. 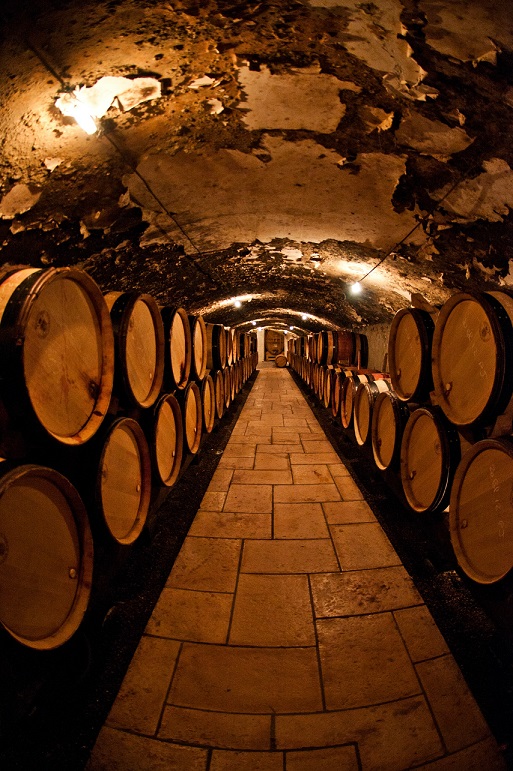 Generous wines, ennobled and aged in oak vats for at least 6 years, are ideal appetizers.

The Regulation Council exists to ensure its strict enforcement. The law classifies the earth and the vines, stipulates the exact number of vines per hectare, determines the dates and speed of harvesting and controls the way the vines are pruned, etc. all this is done to ensure that the grapes will maintain their highest quality year after year, and will produce an excellent wine.

MATURING – in the generous wines – will last at least 2 years and they are always ennobled and aged in oak vats.

The climatic conditions of the country and the wisdom and knowledge of the men who choose the wines, the cultivation of the wines, the elaboration of the new wines and the careful maturing of these wines, has resulted in these being amongst the most appreciated and valued in the world.

The wines of the CONDADO DE HUELVA are a valuable treasure for the palate, only achieved by the hard work and constancy of a few men, who have known how to preserve and continue a tradition whose origins go back many centuries.

The wines of the CONDADO DE HUELVA can be grouped into two different types.

TABLE WINES. Recently introduced into the market, they have been achieved by the means of early harvesting, strict selection of the grapes ZALEMA, control of temperature, etc.

There are white, cool and slightly fruity, with discrete alcohol content, being ideal for fish and seafoods.

GENEROUS WINES. Elaborated by the traditional method for vintage wines, with a minimum of six year in oak vats, with an alcohol content between 15 and 17 degrees, and an inimitable taste and scent of almonds. Ideal as an appetizer, exceptional with the cured ham of the mountains of Huelva and the seafoods of its coasts.

CONDADO PALIDO. Matured in oak vats, its alcohol contents is slightly higher, between 15 and 23 degrees. It is characterized by its amber colour and intense aroma. It can be taken at any time, savouring its excellence little by little. It can be dry, semi-dry, sweet or semi-sweet.

As from 1963, our wines enjoy the protection of the Denominacion de origin status, by which a rigorous and permanent control of the elaboration, storage, maturing and exportation is kept, as if also of the raw material, the vines themselves.

Seventeen municipalities –nine of which belong to the actual growing region, with a total of 16,500 hectares of vines (consisting of the varieties known as Listan, Palomino, Garrido Fino, and Zalema), constitute the region with the Denominacion de Origen, Condado de Huelva, with an annual production of 900,000 hectoliters of new wine from 280 private winegrowers and 19 cooperatives who in turn use 36 different export companies for international distribution.

THE ART OF TASTING

To taste a wine is a near-sacred act, a ritual performed by the light of a candle. With the index finger and thumb of his right hand, the good taster holds the glass by its base so as not to alter the temperature of the wine which he is to try. He raises it to eye level, so that the light shines through the wine, bringing out its colour and brilliance. Next, he lowers the glass to his nose, rotating a little, so that volatile and fragrant substances are liberated and can be distinguished. Finally he takes a little of the wine in his mouth. 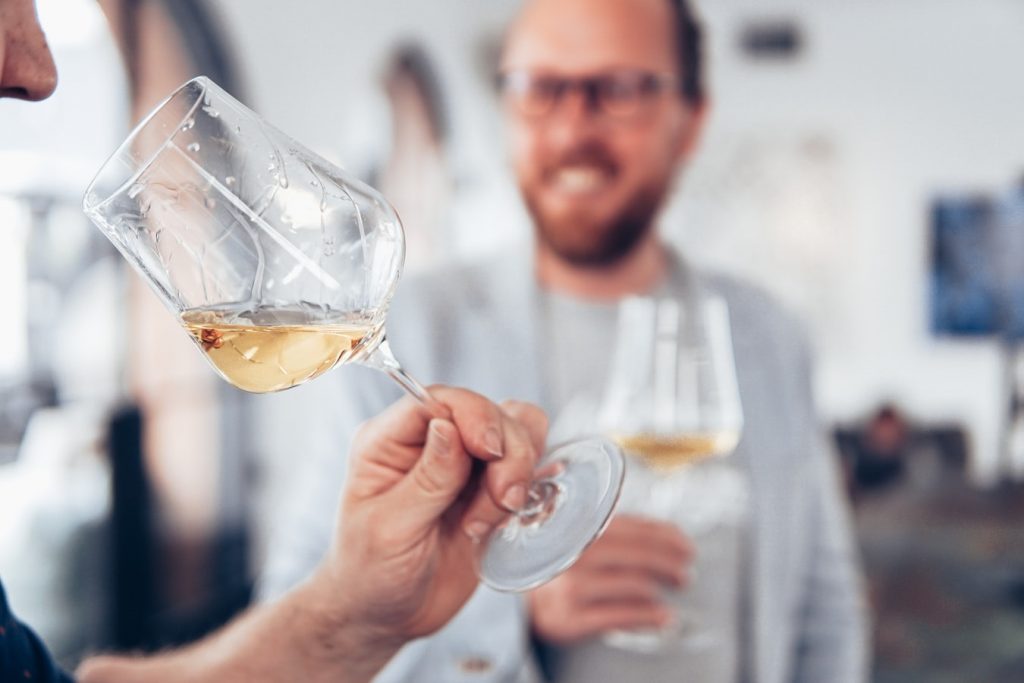 His tongue and taste buds are then impregnated with the flavour of the wine. At that moment, having assessed the colour, aroma and flavour, the expert can enjoy to the full its bouquet, refinement and quality.

So, white wines should be limpid, brilliant and of a slight greenish cast. Golden tints denote oxidation.

Colour is one of the chief attractions of the rose wines from the Penedés. There is a whole gamut of colours from the palest pink to cherry red. It originates from the brief contact of skins and pips with the must during fermentation – usually for some 24 hours.

The colour of a red wine depends on the vineyard which has given it birth and on the time in cask. The presence of ocres is an indication of the time which the wine has spent in oak. The red Tempranillo wines of the Penedés are harmonious and silky; those made from the Cariñena and Garnacha possess great character and intense colour; the great Cabernet Sauvignon wines of the Penedés, known world-wide, exhibit all the elegant character of this grape variety and are volumptious with long finish.

How to Serve Wines

It is not advisable to keep white wine for more than a year, since it is fresher when young. Roses are even more ephemeral.

Sparkling wines made by the Champagne method should be kept for more than a year if they are to be enjoyed at their best. 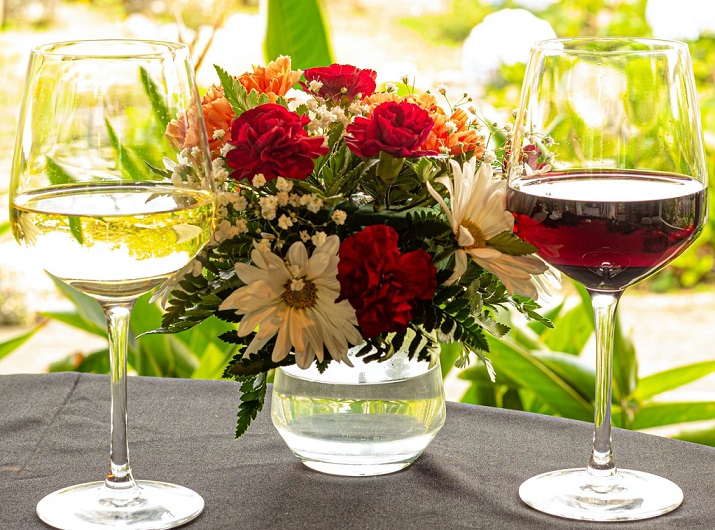 In general, red wines improve with age; it is a matter of the vintage and grape variety. As a rule, they are at their best after 4 to 5 years.

White rosé and sparkling wines should be cooled in the refrigerator – but not in a freezer.

Without resting the neck of the bottle on the rim of the glass, the wine should be served in tall, large glasses. Do not, however, fill them. White wines benefit from thinner and more delicate glasses.

TEMPERATURE FOR THE SERVING OF WINES

It is worth adding that the bottles of red wine should be opened half an hour to an hour before serving, as light aeration ensures maximum fragrance and flavour. 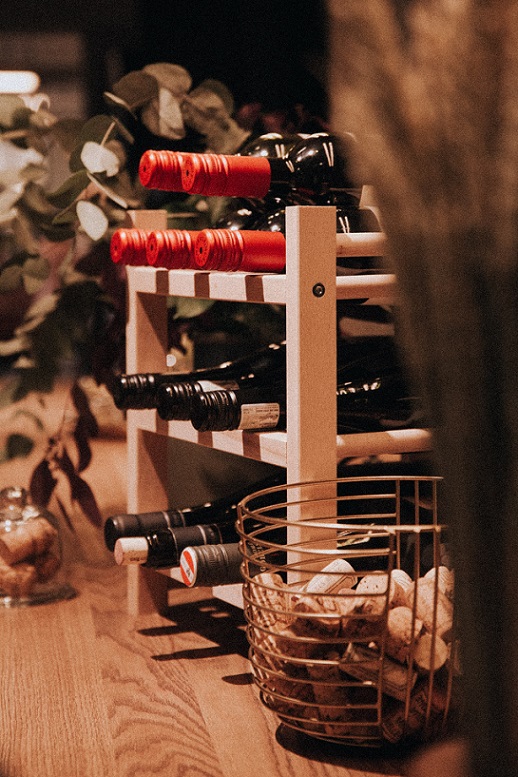 Home cellar: the ideal place is the basement.

The ideal place is a basement, since it is not affected by sunlight or vibration from the street; there is enough ventilation, and the humidity and temperature remain even. If one has no basement, the garage may be pressed into service. A builder can construct in it a small cellar, which should face north with an average temperature of 15ºC.

The cellar should be equipped with compartmented wooden wine-racks so that the bottles do not touch one another. It is useful, in due course, to reckon how much wine is consumed in the household. If, for example, the annual consumption is 100 bottles, buy 500 of the two wines most drunk. Buy 200 during the second year and drink 100 of the 400 remaining from the first purchase. Do the same in the third year; and if the wine first bought is four years old, as time goes by you will build up a reserve, e.g. a nine year-old wine, after it has been in the cellar for five years. 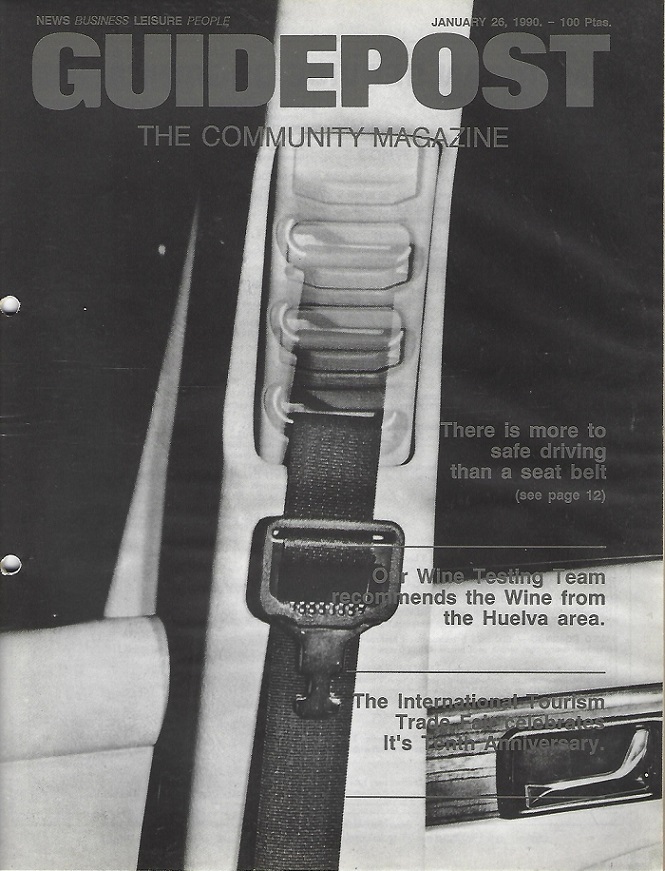 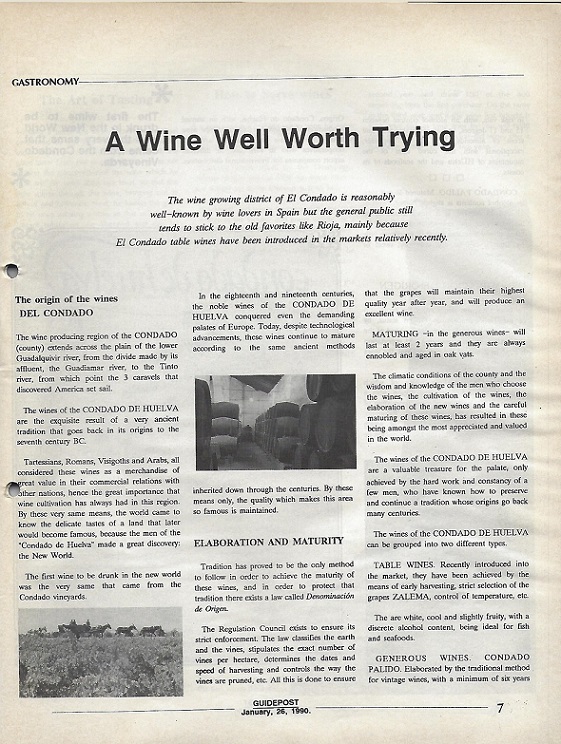 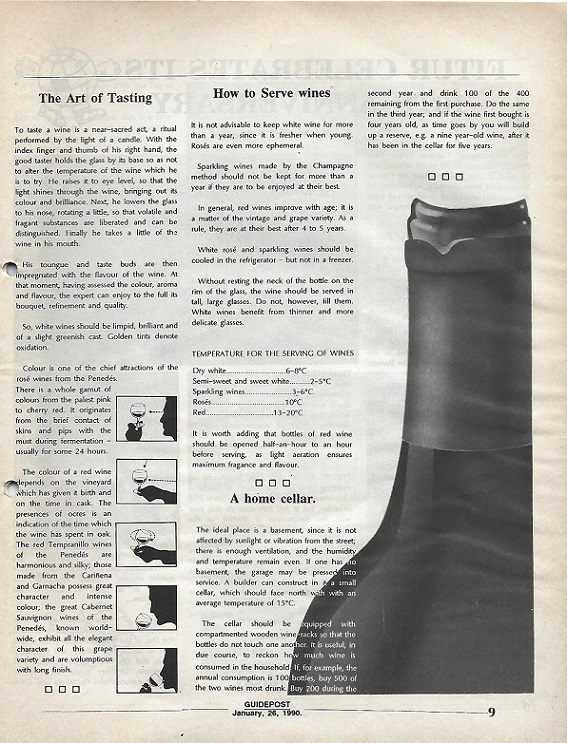 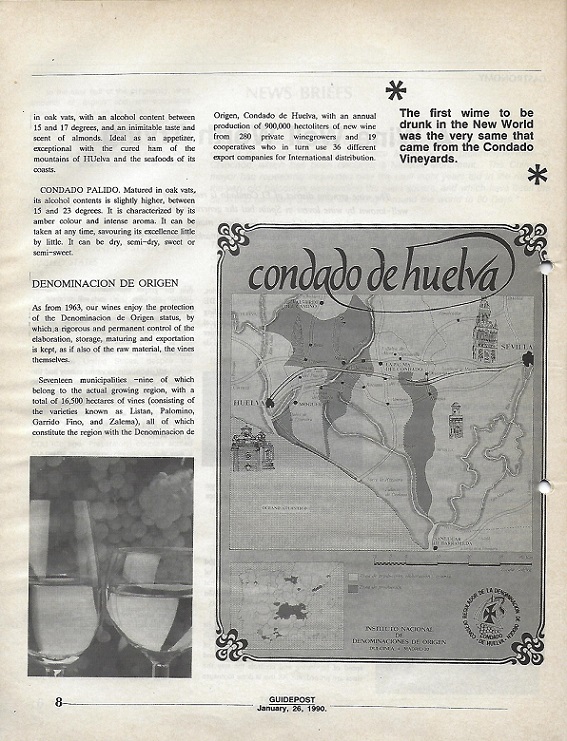 Next article A Second Opinion: A Trip to Remember »